The title of this piece is slightly disingenuous given that England, clearly, have had a worse group of players to pick from than the current crop. The dark years of the 1980s spring to mind, as do the more recent periods of 1991-95 and 1999-2002.

But you do look at this squad that Gareth Southgate has selected for the two remaining World Cup 2018 qualifiers against Slovenia and Lithuania and wonder. We are lucky, to some extent, that qualification for the tournament in Russia next summer has already been all but secured.

If you’re unfamiliar with the 25 players selected, here’s a quick look:

It’s not exactly a list of players that strikes fear into the hearts of the footballing elite; and so it’s probably a good thing that it’s only Slovenia and Lithuania that England face, and with just a point required to secure qualification.

The Mirror has apparently leaked the starting eleven to take on Slovenia tonight, and it looks like this: 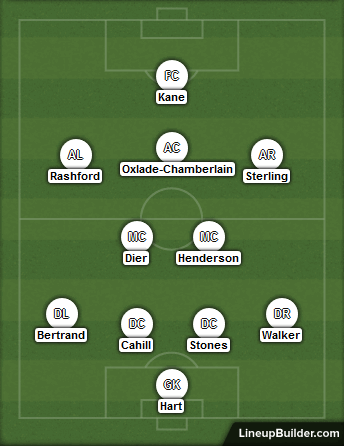 Gareth Southgate has been hamstrung by injuries and unavailability of course, and even he is on record as saying he is unhappy with the players on offer.

“If you were to say ‘am I entirely happy with the squad I’ve named?’ then no, because we’ve got too many good players missing with injury,” he told a press conference.

“The consequence of that is you could well argue there are one or two in the squad who haven’t necessarily warranted it on their performances. I want competition for places and this time maybe we’ve not be able to achieve that because of the number of injuries.

“There’s been a couple of easy decisions because I haven’t had to make phone calls this week (to tell players they have been dropped). They are always difficult but I’d rather be making them.”

Southgate may be referring to the likes of Daniel Sturridge and Jesse Lingard with his last comment, who can’t get a game for love or money with their respective club sides. Marcus Rashford is deployed mostly from the substitutes bench by Jose Mourinho at Manchester United, while Alex Oxlade-Chamberlain would struggle to get in a few pub sides the way he has been playing of late.

Players will return from injury soon enough, and England will qualify for the World Cup without breaking sweat, but this squad really does underpin how badly lacking the Three Lions are as an international force.

It’s often a discussion that causes much debate and consternation in pubs and clubs across the land, but which is the golden generation of English talent?

Naturally, we have to say that the World Cup winning squad of 1966 is the greatest generation of English footballers – the results speak for themselves.

But of the modern era, talk turns to the infamous Euro ’96 team – we’re talking Shearer, Sheringham, Gazza and more, and the so-called ‘Golden Generation’ of the early-ish 2000s. Just think back to the side which took to the field for Euro 2004.

Now that’s a team. You’ve got three no-nonsense defenders in John Terry, Sol Campbell and Gary Neville plus the guile of Ashley Cole, as technically a gifted as a midfield as you could wish to see in Beckham, Gerrard, Lampard and Scholes, plus a front two of Wayne Rooney and Michael Owen that would have been the equal of any coupling in the world at that time.

We can even forgive the presence of David ‘Calamity’ James behind them, such is the quality on show.

Needless to say, even accounting for injuries, this current crop of England players has some improving to do to match the class of ’04.

Previous Post: « World Cup 2018: Who are the 32 Teams That Will Battle it Out in Russia?
Next Post: Red Saturday: All You Need to Know Ahead of Liverpool vs Manchester United »