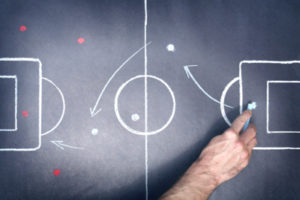 It’s time, dear readers, for an experiment. Don’t worry: we’re not taking you back to school, asking you to stick on a lab coat before the eggy fumes of sulphur dioxide are pumped into the room.

We run various data models relating to football, specifically the top four tiers of the English game, and one of the most profitable thus far from a betting perspective has been Expected Goals.

The premise behind this is simple: each chance created in a match is awarded a points tally based upon it’s likelihood of finding the net, i.e. a 30-yard pee-roller earns probably 0.1 while a four-yard tap-in gets 0.7. At the end of the match, these numbers are tallied and a final Expected Goals scoreline is produced.

We’ve been collecting this data all season, and with the international break upon us we thought it time to crack open the vaults and give our readers an insight into how League 1 and League 2 in England are playing out. Both of these divisions offer a near-enough full fixture list this weekend, so if you are mourning the loss of the Premier League and the Championship all is not lost.

The following table shows collated xG data for home and away matches this term:

Okay, so it looks a bit naff, but the data contained within is very interesting. It shows us how teams are faring on home soil and on their travels – and reveals far more than the ‘Home/Away’ tab on a league table actually does. Remember, we’re only eleven gameweeks into the season in the lower leagues, and so there is still every chance that randomness plays a part in determining the league table at present.

So have a scan of the figures above, and draw your own conclusions as to how matters are unfolding in the third tier.

With it being the international break, we thought it wise to peruse the fixture list and see if we can unveil any betting value based on our data collection. Here’s our conclusions:

Of course, this data does not take into consideration factors like team selection, injuries/suspension, current form etc, but in some cases – such as this Oxford vs Wimbledon encounter – we can conclude that the home side are a very generous price at 23/20.

Oxford are typically very good at home, as displayed by their xG differential, while Wimbledon fail – on average – to muster 1.00 xG for per 90 minutes on their travels.

Walsall vs Shrewsbury: Both Teams to Score (4/5)

At a price of 4/5, the conclusion the bookmakers have drawn is that there is a strong chance that both teams will find the net here, and the evidence is compelling according to our data.

Walsall at home, and Shrewsbury away, both average well over the 1.00 xG mark for and against per 90 minutes, and again while we can’t vouch for absences of star strikers and creative midfielders, from a purely numerical perspective this looks a smart bet.

Same principle again, let’s see if we can unearth any betting value in League 2 this weekend:

Cambridge’s home xG is lower than you would expect for a side with top six aspirations, while Wycombe are doing the business on the road. This ‘Draw No Bet’ selection feels like a free hit with a refund at the minimum likely.

Cheltenham are the darlings of the xG world, constantly outperforming their expected points tally. Their results are starting to match their dominance and Swindon, while not awful, will surely be the latest to fall under their spell – and at odds-against to boot.

Previous Post: « Newcastle United vs Liverpool: Every Stat You Need to Know Ahead of This Classic Premier League Fixture
Next Post: World Cup 2018: Who are the 32 Teams That Will Battle it Out in Russia? »