One of the reasons that many punters get into golf betting – even when they aren’t fans of the sport in some cases – is because of the profit potential that exists.

Most bookmakers offer six places these days for each way bets, and with winners priced at 100/1+ a regular feature on both the PGA and European Tours every season, the old dollar signs dictate where the money goes.

Of course, finding winners is the tough bit, but like horse racing punters who study the form and the conditions, researching in the hope of finding profitable golf wagers is half the fun.

What is less fun is when a tournament jolly rolls up at odds of 5/1….and it is hard to oppose them. Rory McIlroy boasts an outstanding record in the Dubai Desert Classic, recording seven straight top-10 finishes at the Emirates Golf Club with two of those being victories. He returned from injury last week ad finished third at the Abu Dhabi Championship, and so assuming there is no reaction from his previously damaged ribs.

So that’s the bad news for punters this week: the short favourite is likely to win and is had to oppose on any grounds. The good news is that there are other ways to profit!

The Sun Has Got His Hatton

The weather in this part of the world is typically hot, sunny and windy – the breeze can be a real feature on exposed tracks like this Majlis course at the Emirates.

The subsequent conditions can be described as ‘Links-like’ – that unique form of golf so celebrated in the British Isles, and so as such backing a few UK-based players to storm the money places is wise.

One we particularly like is Tyrrell Hatton (25/1), a player who liberally achieves top-six finishes with gusto. He enjoy golf in this neck of the woods too, finishing third and eighth here in his last pair of visits and 15th in Abu Dhabi last week.

Hatton is reliable in windy conditions too, twice winning the Alfred Dunhill Links Championship and finishing fifth in The Open back in 2016. At 25/1, the Englishman represents outstanding value in the each way market. 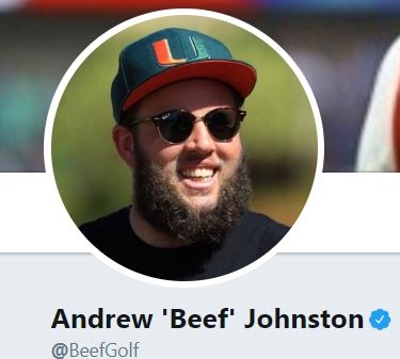 When interviewed after finishing ninth in Abu Dhabi last week and reflecting on a poor 2017 by his standards, Andrew Johnston’s happy-go-lucky demeanour dropped for a second. In its place came a stern, almost ashen seriousness.

‘I lost focus’ was the message from the man known as Beef, who has become a cult hero across the globe thanks to his big smile and even bigger beard. It is tough when the media spotlight shines on you, particularly for a young one who was making his debut on the PGA Tour.

He spoke of renewed vigour in his post-tournament interview, and that manifested itself in a fine performance in Abu Dhabi where he ranked fourth for Greens in Regulation.

The signs there were that Beef’s game is returning to somewhere near its peak – and remember, this is a player who has won at the devilish Valderrama. We’re willing to put our money where Johnston’s mouth is by backing him to finish in the top-10 this week at 10/1.</>

One of the factors that defines golf in the desert is the wind, which can get up to rather frightening speeds. Last year at this event trees were up-rooted and play was suspended when the gale blew a little too strongly for most people’s liking.

A characteristic of said wind is that it tends to increase in velocity through the day: starting as a benign flutter in the morning before mutating into a raging storm as the afternoon starters are going about their business.

In the First Round Leader betting market, that naturally hands a huge advantage to the early starters.

The big boys – McIlroy, Henrik Stenson and Sergio Garcia – have been grouped together early doors and will be looking to get out of the blocks quickly, but we can take them on over the first 18 holes and our man is Alexander Levy (60/1).

The Frenchman was part of the triumphant European team at the President’s Cup, and he must have gotten a real buzz from that as he finished seventh in Abu Dhabi last week.

Levy is a birdie machine when he gets on a roll, making 21 last week (for context, McIlroy made 19), and that is a recipe for a sound bet in the First Round Leader market.