If you’re new to darts or have ever considered betting on the sport before, let us beguile you with how Week 1 of the Premier League Darts 2018 panned out.

There were five matches in all, with two odds-against winners, two draws which paid out at approximately 4/1 each, and one demolition job as world number one Michael van Gerwen demolished the newly-minted world champion Rob Cross on a fascinating opening night in Dublin.

Perhaps that has persuaded you that betting on the darts could be a potentially lucrative pastime!

The Premier League roadshow rolls onto another Celtic nation in Week 2, and this time we’re in Cardiff for what is sure to be another night of top tungsten action. Here’s what punters can expect on Thursday: 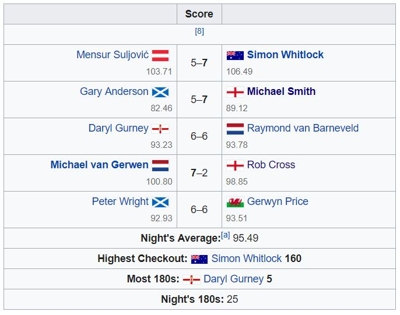 Smith found himself 1-5 down to Gary Anderson on the opening night in Dublin, but carried on grinding away as the Flying Scotsman missed double after double. In the end, ‘Bully Boy’ would claim the unlikeliest of 7-5 victories.

It was hardly a vintage display from a player making his return to the Premier League stage, but there was surely plenty of nerves around and the win will give Smith a huge lift. His form in the UK Open Qualifiers at the weekend – winning the third qualifier and beating Van Gerwen along the way – is evidence of that.

Gurney was buoyed by being back in Dublin; the scene of his World Grand Prix triumph back in the summer. He rattled in five maximums, but a poor checkout ratio of 27% allowed Raymond van Barneveld to escape with a draw.

From a betting perspective, the theme in this game has to be 180s. These two players are some of the most prolific maximum hitters in the business, and assuming the match goes eleven or more legs there will be ample time for both to get stuck into the treble 60 bed.

It’s not a huge surprise that Rob Cross has struggled in the past couple of weeks to recapture the form which earned him a world title at the first attempt – a year ago he wasn’t even playing the game professionally!

Form is temporary, class is permanent, as the old saying goes, and Cross’ high standards will return soon enough.

But Voltage will have his hands full here with Whitlock, who made a mockery of his status as the bookmakers’ favourite to finish bottom of the league table by producing a mesmeric display last week.

The Wizard rattled in thirteen 140s – more than any other player on the night – and recorded an unbelievable checkout success rate of 87%.

The Aussie will regress to the mean as far as his doubling goes in Cardiff, but don’t underestimate the power of confidence. Back the Over 10.5 Leg line at 4/7 here.

Missed doubles cost Peter Wright dearly against Gerwyn Price last week, and while he had to settle for a point thereafter leading 5-1 you suspect MVG won’t quite be as forgiving.

Some heavy scoring around the treble 20 bed created countless opportunities for Snakebite to win legs, and in the second half of the match against Price he was unable to take advantage. Given that we expect Van Gerwen to go toe-to-toe with Snakebite on the scoring front, the Dutchman has to be backed to win this game.

It was a cool, clinical display from MVG to put Cross in his place, and after his relinquishing his world championship mantle it appears as though the world number one has got his mojo back now that he has something to prove again. That’s bad news for everybody else in the world of darts.

Double up the selection from Cross vs Whitlock with a MVG -2.5 leg handicap at around the even money mark.

After a slow start against Wright, Gerwyn Price got stronger as his Premier League debut went on and, in the circumstances, can be happy with his point.

The Welshman will be on home soil here, and given the struggles that Gary Anderson has faced with his bad back there will be plenty of money placed on the Iceman in Cardiff and elsewhere.

Anderson threw away a four-leg lead last week as we know, and actually pulled out of the UK Open Qualifiers at the weekend. Only he and his chiropractor know how bad the problem is, but clearly the Flying Scotsman isn’t firing on all cylinders at present.

It’s a gamble – Anderson’s back may be fine on Thursday – but backing the Price/Draw Double Chance at 10/11 is smart.

Van Barneveld had to battle back from 3-6 down to nick a point against Gurney in Dublin, and the Dutchman was scoring well a checkout success of just 30% isn’t going to get the job done at this level.

Suljovic made a decent fist of his Premier League debut, going 3-1 up against Whitlock courtesy of some consistent scoring and high quality double-hitting.

The Austrian was pegged back in the middle of the match, but that was more due to the Wizard weaving a magic spell rather than Suljovic going off the boil.

Previous Post: « Next Chelsea Manager Betting: Is This the End of the Line for Conte?
Next Post: George Groves vs Chris Eubank Jnr Preview: Will Groves’ Big Fight Experience Hold the Key in Huge Domestic Bout? »