International friendlies are a scourge on the football calendar for many. They disrupt the league schedule in frustrating fashion – particularly at this business end of the campaign – and eat into the Saturday afternoon tradition of placing an acca and tuning into Jeff Stelling and the rest of the Soccer Saturday lads.

We’re not going to raise the argument that the international break is a good thing – it isn’t – but there is a sense that Friday’s friendly between England and Holland in Amsterdam will be well worth checking out – and not just for those Three Lions fans that have made the trip to the Netherlands’ capital.

Here are five reasons to get excited about Holland vs England on Friday:

Fans of patterns and historical trends from fixtures will be delighted to hear that Holland vs England games typically come jam-packed with goals, and indeed five of the last six meetings between the pair have delivered three goals or more.

Those of a betting persuasion who enjoy tackling the Both Teams to Score market will be delighted to hear that 60% of the last ten Anglo-Dutch clashes have delivered.

There’s nothing worse than a tepid friendly that peters out into a goalless draw with minimal goalmouth action, so it is encouraging that these two teams tend to put on a show when they meet.

A Chance to Tear Up the History Books 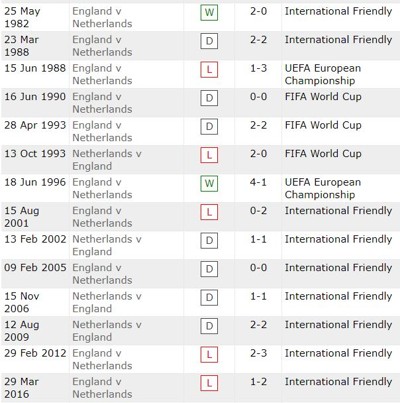 In a surprising twist, England have a pretty dire record against the Netherlands, and have failed to win any of their last seven matches against the Oranje. Extend the run further and we note that the English have only prevailed over the Dutch in one of their last thirteen!

The last victory for the Three Lions came way back at Euro 96 – more on what happened then in a moment. So yes, England are without a win against Holland in the past 20 years

The last seven meetings have all come in friendlies, and our poor record of W0 D4 L3 suggests that we shouldn’t be so hasty in writing off the Dutch come Friday evening.

Whether the current crop of English players knows about the record, and whether indeed they would care less if they did, there is still a sense of optimism that the boys can tear up the history books in Amsterdam.

Memories of the Class of ‘96

For readers of a certain vintage, the European Championships in 1996 will be nothing but a blur, and yet for others the memories of an outstanding tournament in England will live long in the memory.

The tournament served up England’s best effort in a major competition in a long old time, and there was certainly a sense of optimism surrounding a team containing messrs Shearer, Sheringham and Gazza in contrast to the general indifference that greets the national team these days.

The Three Lions progressed all the way to the semi-finals, where they were downed – unsurprisingly – by Germany on penalties, with irony of ironies Gareth Southgate missing the crucial spot kick.

The undoubted highlight of the tournament from an English perspective was the 2-1 win over Scotland, which featured Gazza’s wonder goal of course at the old Wembley, but not far behind was our 4-1 demolition of Holland on a balmy summer’s evening.

Braces from Shearer and Sheringham did the damage, but it was a magnificent performance from the much-maligned Gascoigne that, in the words of the tournament’s theme song ‘Three Lions, had England fans dreaming.

Not many of this current England squad will even be able to remember Euro 1996, such is their youth.

Indeed, Southgate could name near-enough name a starting eleven of 24-year-olds or younger if he plays Jordan Pickford in goal, Alfie Mawson, Joe Gomez and John Stones at the back, Dele Alli, Lewis Cook, Eric Dier and Alex Oxlade-Chamberlain in midfield and Raheem Sterling and Marcus Rashford in attack.

That bodes very nicely for a bright future indeed for this current crop of England stars.

No Kane on the Plane

The good news for Tottenham and England fans is that Harry Kane will only be out for a month or so with that ankle injury he suffered against Bournemouth.

So Kane will be on the place to Russia and the World Cup, assuming he doesn’t get injured again in the interim period, and the frontman will be looking to lead his side to glory.

The Holland friendly at least gives Southgate an opportunity to investigate other options should Kane break down before the summer showpiece.

Marcus Rashford, who blasted two goals in Manchester United’s win over bitter rivals Liverpool, appears to be considered a left winger these days by most in the game, and his chances of leading the line look limited.

Raheem Sterling has played as a ‘false nine’ for Manchester City, although the assumption is that a system like that is rather too ‘avant garde’ for a country like England.

All of which means Jamie Vardy has a clear run at the vacant position, and he will be looking to make that count come Friday.

Previous Post: « Mission to Moscow: Who Is In England’s World Cup 2018 Squad….And Who Must Impress This Week?
Next Post: International Break Misery? Here’s a Few Lower League Betting Pointers to Consider »