The last time England won a football match in Amsterdam it was the same year that Neil Armstrong stepped foot on the moon, and while it would be science fiction to suggest that the Three Lions played football from another galaxy in the 1-0 win over the Dutch on Friday evening, there was certainly a huge improvement overseen by the man at the controls, Gareth Southgate.

We have in England been crying out for a modern, progressive and dynamic national side for a number of years; even harking back to the days of the ‘golden generation’ of Scholes, Beckham, Gerrard, Lampard and co, who at times looked like round pegs in square holes when wearing the Three Lions on their shirt.

And that is why the performance in the win over the Netherlands was so encouraging. Southgate lined up his troops in the common 2018 trope of 3-4-3 – no more 4-4-2 in this brave new world, boys – and it worked, for the simple reason that it’s a system that most of the big clubs in the Premier League are using.

And so rather than shackling the likes of Raheem Sterling, Marcus Rashford and Jesse Lingard in wide areas with defensive responsibilities, they were allowed to drift and roam as they pleased, which caused havoc in behind the Dutch midfield. Alex Oxlade-Chamberlain, who seems to be fulfilling his potential now he’s getting regular run-outs in the centre of midfield for Liverpool, acted as the link man between deeper areas and that riotous front three, with Jordan Henderson sitting deep and collecting the ball off the back three.

The only curveball was Kyle Walker as one of the centre backs, but even that makes some sense: he has the pace to cover his fellow defenders – particularly John Stones when he goes on one of his self-destruct missions, and in this system Walker can even press forward as a sort of inverted wing back when the opposition are playing a solitary frontman.

It is an exciting outlook for the Three Lions, and while most pundits and media outlets described the new shape as ‘experimental’, it was a flirtation with something a bit different that clearly worked. If England are to ever again compete in a major tournament, this is the level of innovation we require.

There are caveats, of course. The Dutch are a pretty sorry side at the moment; indeed, it is sad to see how far they fallen since the ‘Total Football’ days of yesteryear. The simple fact is that this was an Oranje team that we should be beating nine times out of ten.

But there’s winning and then there’s winning, e.g. completing the job in a highly satisfactory manner. England were excellent on Friday, and hopefully they can carry that into Tuesday’s clash with Italy.

It is just those 90 minutes against the Italians that separates us from the World Cup; the national side’s next venture of note, barring a few friendlies prior to the main festivities, will be our first Group G outing against Tunisia in Volgograd on June 22.

Southgate has dropped some pretty heavy clues of late, so is this how England will line up in the World Cup opener? 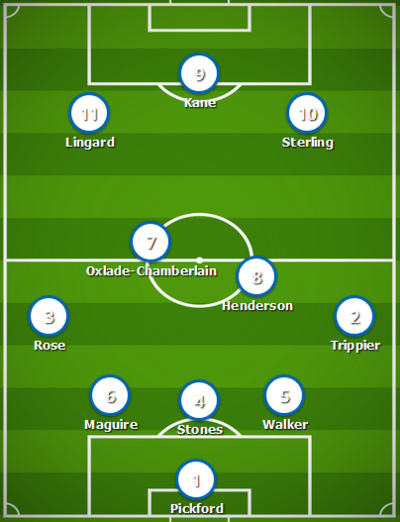 The assumption is that nobody suffers a bad injury or a catastrophic loss of form between now and June, of course, but otherwise it is essentially the same line-up that took to the field against the Dutch.

Obviously Harry Maguire came on as a very early substitute in Amsterdam in place of Joe Gomez, but you suspect he would have started anyway had he not been involved in an FA Cup tie for Leicester against Chelsea that went to extra time less than a week before.

The other addition is Harry Kane, who will naturally start if he’s fit ahead of Marcus Rashford. The Manchester United man did well on Friday but is far from the finished article, and Kane’s gift for goals – and the fact he leads the line for Spurs in a system similar to this also helps.

There’s one major elephant in the room here: Dele Alli. The Tottenham man missed out on Friday due to injury, but you wonder if he will have an easy task displacing Jesse Lingard from the starting eleven.

Ask any Manchester United fan and they will tell you the same: Lingard is the real deal. He’s slowly becoming an integral player for the Red Devils, while Alli – so impressive last season – is becoming worryingly pre-disposed to the ‘dark arts’ of simulation and naughty over-the-ball tackles.

It would be a brave call to pick Lingard ahead of Alli against Tunisia, but if Southgate is to reward those in form rather than reputation alone then it is a simple decision to make.

Previous Post: « International Break Misery? Here’s a Few Lower League Betting Pointers to Consider
Next Post: Gareth Bale-ing Out of Madrid? Welshman Odds-On to Leave Real This Summer….But Where Will He Go? »