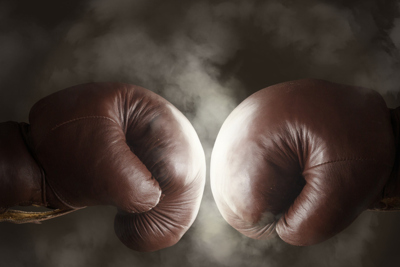 The build-up to the original meeting between David Haye and Tony Bellew was trademark British boxing in the modern age.

Sky Sports, as ever bolstered by the slippery Eddie Hearn’s Matchroom Boxing team, know that they can guarantee bums on seats – and PPV sales – by ‘enhancing’ the sense of dislike between two fighters.

And so that’s how Haye and Bellew, a pair of pugilists with little in common and no previous given that they have, by and large, fought in different weight divisions, found themselves sat opposite each other on the broadcaster’s ‘The Gloves Are Off’ programme.

The pair sold the fight very nicely, and in the end managed to create a genuine sense of loathing between the pair after a fiery war of words spilled over into semi-violence at a pre-fight press conference.

The fight itself was something of a non-event. Both men windmilled wildly in the early going – the battle of egos writ large – before Haye suffered a devastating torn achilles that ultimately ended his chances of winning.

Make no mistake, this was no ‘little toe-gate’. Haye was clearly in agony but bravely soldiered on, even though the outcome – he simply could not evade Bellew’s punches for 12 rounds – was obvious. Happily, no further damage was done as the Merseysider ended proceedings in the eleventh.

The fighters were on fairly amicable terms after as Haye sought a rematch, which was duly awarded.

And then….well, you can probably guess the rest. With a fight to sell, the animosity returned as Bellew spoke of ending Haye’s career and the Bermondsey man claimed redemption was his for the taking.

It is a fascinating fight for a number of reasons; the most pertinent is that it has a genuine 50/50 feel to it.

So there’s plenty of talk about Haye vs Bellew II at the O2 Arena on Saturday, but where is the smart money going?

The Case for Haye

Haye, the former WBA heavyweight and WBO cruiserweight champion, was as short with the bookmakers as 1/5 prior to the first fight, although the verdict there has clearly spooked the sportsbooks as he can be backed at around the 1/2 mark this time.

It’s an interesting price change and one that really does warrant a second thought. If Haye was considered a 1/5 chance back in March 2017 before suffering a crippling injury that rendered him almost useless as a fighter, why has his price lengthened given his long recuperation time?

Haye is the better boxer, make no bones about it, and the naturally bigger man too. He is more experienced at heavyweight, and assuming the hunger is still there inside – as he claims it is – then it is a fight he wins nine times out of ten on home soil.

There’s an old saying in sport that you should beware the wounded animal, and that is what Haye is here really: a dreamer eyeing one last world title shot. Defeat to Bellew will end his career as a serious fighter, and you suspect that – on two legs at least – nothing will stop the 37-year-old from another renaissance moment.

The Case for Bellew

There is something rather extraordinary about Tony Bellew. He has that unique X Factor that all sportsmen and women have who are capable of achieving incredible feats, and it is that which makes him a dangerous animal in any fight – let alone one against an opponent on the brink of extinction.

You knock Bellew down and he just gets back up again. He lost to Nathan Cleverly in October 2011 at Liverpool’s Echo Arena; a defeat which would have really hurt the proud Evertonian. So what did he do? He went back to the drawing board and had the ultimate revenge on the Welshman some three years later, winning a split decision but doing so comfortably in the opinion of many onlookers.

He went and fought the dangerous Adonis Stevenson in Quebec – not many have the bottle to do that, and he won the WBC cruiserweight title against Ilunga Makabu despite being knocked to the canvas in the first round.

There is the heart of a lion in this ‘fat mouthy Scouser’, as Bellew refers to himself, and he is a fighter who appears readily on the edge at all times; not aided by those big jet-black eyes which give him the look of a slightly sinister character at the best of times.

It doesn’t matter which side you have taken, all supporters have their concerns here.

Haye is drinking at boxing’s last chance saloon, and that brings with it unique pressure. There have been a number of occasions in which he has postponed or cancelled fights altogether – the arranged December meeting between this pair was cancelled so that the Bermondsey man could undergo surgery, as was a planned bout with Tyson Fury.

Haye could be unlucky with injuries or he could be the kind of guy unwilling to find unless everything is absolutely perfect.

So what happens if he wakes up on Saturday with a bad back or a stiff neck or a sore knee? Haye has referred to his various ailments so many times in his career you wonder if the muscle most susceptible to injury is that between his ears.

As for Bellew….well, you know what you are going to get. He’s a decent fighter, arguably lacking in technical ability but absolutely wanting for nothing in the courage department. Occasionally that can be enough to get the job done.

But the concern for his fans will be his media appearances in the build up to the fight. He looks tired – not physically, but with the fight game in general – and that’s no big surprise for a man who has spoken of retirement for a long time and who has had to wait more than a year for his ring return.

And the readiness, and emotion, with which he speaks of the death of his brother-in-law last year suggests there are certain wounds that still need to heal.

The best boxers are cold and clinical rather than heart-on-sleeve types, and so you wonder if Haye will prevail here….assuming he wakes up on the right side of his bed, that is.

Previous Post: « World Cup 2018 News: The Ox and Zlatan Set to Miss Out as Boateng Sweats on His Place at the Summer Spectacle
Next Post: Horse Racing Punters Say Goodbye to The Tote with Britbet Expected to Take Over »