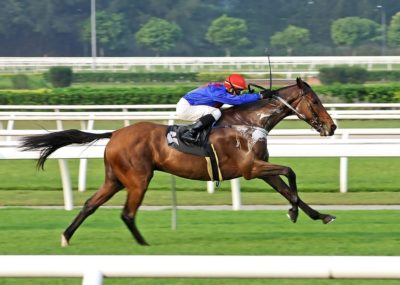 From abandoned starts to 100/1 winners, the Grand National festival is never short of a headline-making story or two.

And the 2018 edition looks set to make history for the most heart-warming of reasons.

Jockey Guy Disney will become the first amputee to ride over the famous Aintree fences when he saddles up in the Randox Health Foxhunters’ Chase – run over the Grand National course – on the opening day of the festival.

And the Guinness Book of Records has confirmed that Disney will be the first amputee to take to track.

Disney was serving in Afghanistan back in 2009 as a captain in the British Army when the vehicle he was travelling was hit by a grenade. The subsequent impact cost him his right lower leg.

Wearing a prosthetic, the 36-year-old has enjoyed plenty of success as a jockey in his own right, and has earned his place at Aintree on merit, not by sympathy.

The unique back story that pre-dates Disney’s racing career will of course be the feature of news reports ahead of the Grand National festival, which kicks off on Thursday April 12. But it is well worth celebrating his achievements as a jockey, too.

He took the spoils in the Royal Artillery Gold Cup at Sandown Park in 2017 – the first amputee to win under Rules in Britain conditions, and he repeated the feat earlier this year too; again on board Rathlin Rose.

He will pilot Gallery Exhibition in the Foxhunters’ Chase; a horse he helped to purchase along with the Somerset Racing GD syndicate.

Gallery Exhibition has been trained by Kim Bailey, himself a former Grand National winning trainer, who has known about Disney’s story from the beginning. “It will be an extraordinary feat,” he said.

“I saw Guy when he was in hospital, so I’ve known the story from day one. When he was lying in hospital, all he wanted to do was ride in a race and get back in the saddle and that was his ultimate dream.

“We all thought he had no chance really, but then he then rode in a charity race and finished second. Since then he’s moved on to prove himself under Rules and in point-to-points. The hours he’s spent trying to help him to get back in the saddle and ride and get the BHA to agree to let him ride, has been extraordinary.

Gallery Exhibition has been installed as a 20/1 shot by the bookmakers, and those odds are arguably generous given the decent performance he put in at Musselburgh last time out, finishing third behind another Foxhunters’ Chase fancy in Wonderful Charm (8/1).

Perhaps the horse that Disney and all others in the field will need to catch is Burning Ambition (3/1), a seven-year-old with an eye-catching win at Limerick to his name. He did, however, disappoint in the St. James’s Place Foxhunter Challenge Cup Open Hunters’ Chase back in March, finishing eighth despite setting off as the bookmakers’ favourite.

A Grand Day Out

Much of the focus of the Grand National Festival will be on its final day, Saturday April 14, and that’s only natural given that the title race – which has been moved to a later start time of 5:15pm – is the most bet-upon horse race in the world.

But punters are advised to keep an eye out for plenty of value in the opening pair of days of the festival, where a number of Group 1 races await.

Grand National Thursday opens with the Big Buck’s Celebration Manifesto Novices’ Chase at 1:45pm, and that is followed by a trio of Grade 1 outings in the Doom Bar Anniversary 4YO Juvenile Hurdle, the Betway Bowl Chase and the Betway Aintree Hurdle, where a prize fund of £250,000 is paid to the winner.

Friday is Ladies Day, and the fine fillies will watch on as a quartet of Group 1 renewals unfold before them. There’s the Betway sponsored Top Novices’ Hurdle and Mildmay Novices’ Chase, the Sefton Novices’ Hurdle and the standout race of the day, the JLT Melling Chase.

At the early declaration stage the likes of Altior, Balko Des Flos, Politologue and Douvan have all been entered into the JLT. Altior extended his winning run to 13 races after triumphing in the Queen Mother Champion Chase at Cheltenham, and he will take some stopping here. Can Douvan recover from his festival disappointment to give punters a run for their money?

Previous Post: « When the Going Gets Tough: Which of the Favourites Is Most Likely to Win The Masters?
Next Post: Fury Across the Mersey: Can the Toffees Give Liverpool Something to Chew On? »

Heads or Tails: When Football Matches & Tournaments Have Been Decided by a Coin Toss
More Blog Posts | Full Archives