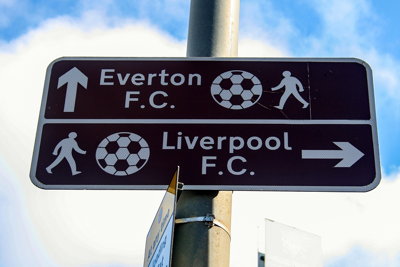 You can get from Anfield to Goodison Park with a hop, skip and a jump across Stanley Park. Unlike some footballing rivalries, which are ‘manufactured’ through disputes and one-off clashes, the battle between Everton and Liverpool is ingrained in the every aspect of the two clubs’ DNA: it’s in the passion of the fans, and the proximity of the two outfits’ home.

Saturday lunchtime will witness the 282nd Merseyside derby; not that the passage of time has dialed down the ill-feeling between the blue and the red half of this football-mad parish of the north west of England.

Forget the league table: there has ever been a dead rubber between these two sides! Liverpool might have aspirations of finishing second behind Manchester City in the Premier League – and worse-case scenario fourth place will do, but Everton, mathematically speaking, have very little to play for.

But don’t be fooled into thinking that the Toffees will roll over for the Reds here, far from it. They have a number of Scousers in their squad, each of whom will be abundantly aware how much this match means to the fans, and Sam Allardyce too understands how important getting the bragging rights is in English football.

To the untrained eye this has got a Liverpool win written all over it; but as we know, in the rarefied air of bitter local derbies almost anything can – and no doubt will – happen.

Occasionally, the head-to-head records between two teams identifies a pattern that pundits and punters alike can use to inform their opinions. The history between Everton and Liverpool is no different.

The Toffees haven’t beaten their red-shirted rivals since 2010: a run which spans 16 meetings and eight defeats.

That includes a drought of six matches at Goodison Park, so any theories of home advantage can be well and truly kissed goodbye here.

A useful side-note to mention, however, is how well Everton have fared in their pair of matches with Liverpool this term. A 1-1 draw and a 1-2 defeat doesn’t sound all that impressive, but the Toffees noticeably raised their game and that is an obvious sign of their motivation for this fixture. You write them off at your peril!

Everton are in an arguably better place than Liverpool as far as player availability is concerned.

They will be without Eliaquim Mangala, Mason Holgate and James McCarthy, but those are all long-term absentees and the Toffees have won without them. Idrissa Gueye and Gylfi Sigurdsson could both also be absent, but again neither of that pair has proven particularly influential this term.

The news isn’t so rosy for Liverpool, who are definitely without defenders Joel Matip and Joe Gomez, could be without Emre Can and have a huge question mark next to the name of their talisman, Mo Salah.

The Egyptian left the field in his side’s 3-0 win over Liverpool with what appeared to be a groin injury, and with the quick turnaround from Wednesday you would wonder if he will make it onto field of play at Goodison Park.

If he doesn’t, that will enhance Everton expectations yet further.

The bookmakers are offering the best part of 4/1 on an Everton victory, and in the context of a 90 minute match – and given what we’ve seen above – you do wonder if there is value to be had there.

That misses two glaringly obvious points, of course: a) Everton aren’t very good, and b) Liverpool have been outstanding all season long.

But as we’ve already noted, the Toffees have raised their game in these local derbies, and you do wonder how Liverpool will fare without Salah, assuming he doesn’t start. They might just lack that attacking edge they have shown so readily this term.

Everton were trounced 1-3 against Manchester City last time out, but as a rule they are generally pretty good at Goodison Park; losing just one of their prior ten. And they now have an attacking outlet to put the ball in the net: Cenk Tosun, the big-money Turkish signing who has notched four in as many games.

The history books aren’t kind to Everton in these fixtures as we know, but as Tottenham showed against Chelsea last week lengthy hoodoos can be broken. They claimed their first win at Stamford Bridge since 1990 on Sunday, which proves that, at some point, poor and almost inexplicable runs do come to an end.

Of course, savvy punters will know that they don’t have to simply back Everton outright to make the most of the value on offer. Other options, including Draw No Bet, Double Chance and Asian Handicaps, are available.

And then there’s the goals-based markets. Everton have kept just one clean sheet in their last ten; Liverpool are without two key defenders. A flutter on Both Teams to Score & Over 2.5 Goals will more than double your money.

Heads or Tails: When Football Matches & Tournaments Have Been Decided by a Coin Toss
More Blog Posts | Full Archives