Argentina will be led to the World Cup in Russia by Jorge Sampaoli, a highly respected coach who worked wonders with Sevilla and guided Chile to Copa America glory.

He is widely regarded as a man capable of springing a tactical surprise or two, and he did exactly that in a friendly against Singapore last year when he fielded a 2-3-4-1 formation!

It worked – the Argentines won 6-0 – and you wonder if attack is the strongest form of defence for a side blessed with an abundance of creative talent but very few classy defenders to call upon.

That was evident in their World Cup qualifying campaign, where they needed a Lionel Messi hat-trick to secure qualification against Ecuador in the final gameweek, and as recently as March they were thumped 1-6 by Spain in a friendly.

Perhaps a radical approach is exactly what the doctor ordered then as they seek a first triumph in the summer showpiece since 1986, when the world was mesmerised by the magic feet – and hand – of Diego Maradona.

Could a two-man defence be the answer to their prayers?

No Case for the Defence

Sampaoli named his full 23-man squad for the World Cup on Tuesday, and once again it looks like a rather top-heavy selection.

In attack he can call upon Lionel Messi, Sergio Aguero, Gonzalo Higuain and Paulo Dybala; with no place for Mauro Icardi, despite the Inter Milan frontman blasting 29 goals in Serie A this term.

And then at the back it really is a case of slim pickings. Javier Hernandez, off earning his fortune in China, will be joined by Manchester based Nicolas Otamendi and Marcos Rojo, former Tottenham man Federico Fazio, Cristian Ansaldi, Marcos Acuna and Gabriel Mercado.

At least Sampaoli can rely on a pair of safe hands in goal, albeit in the shape of two men who can’t get a game at club level: Sergio Romero and Willy Caballero. River Plate’s Franco Armani will provide the cover.

Now, if you were playing on FIFA 18 or Football Manager you would be desperate to find a way of getting as many of those attacking talents into your side as possible, and in 2017 Sampaoli devised a system that enabled him to do just that.

The question is: will he have the bravery to field the same set-up in Russia?

Sampaoli is best known to a European audience for his work with Sevilla, where in a single season he guided the club to their highest La Liga finish in seven years of fourth and to the last 16 of the Champions League.

He is known for an ultra-attacking mentality, backed by a quick, possession-based passing game and high pressing to win the ball back as high up the pitch as possible.

It is those basic tenets that he will be looking to bring to the Argentina set-up this summer, and while he would ordinarily opt for his traditional 4-2-3-1 system, you do wonder if he might opt for something a little more futuristic in Russia, such as the below: 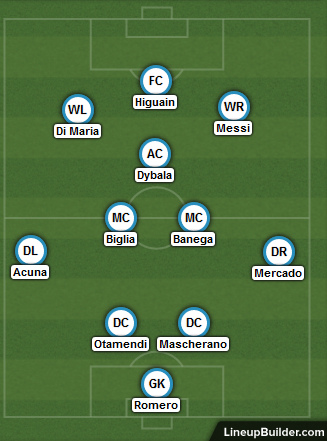 It’s funny, because while it looks faintly ridiculous on paper, in reality the balance isn’t too bad.

The full backs are attacking by nature, but can also defend – Mercado is a right back nominally, but one who loves to bomb forward. He was purchased by Sampaoli for Sevilla, too.

Biglia and Banega will dovetail in midfield, with the latter adding a bit more attacking guile to the latter’s typically South American physicality.

How do you solve a problem like Di Maria? You slot him in an advanced role on the left hand side, where he is at his best, with the mercurial Paulo Dybala – a match winner on any given day – playing ‘in the hole’ behind Gonzalo Higuain, who seems to have restored the manager’s faith in him after being cut adrift from the international scene for the while.

Drop the juiciest cherry of them all, Lionel Messi, onto the top of an already delicious cake, and the Argentines look ready to rock in Russia.

Odds of 11/1 suggest the bookmakers aren’t overly convinced by them, but this is a side who reached the final in 2014 remember and whose new-found attacking outlook under their mastermind head coach could surprise and delight in equal measure this summer.

Previous Post: « Spain and Belgium World Cup 2018 Squad News: Chelsea Trio Miss Out as Spanish Set Sights on the Trophy
Next Post: Can Unai Emery Bring the Good Times Back to Arsenal? »