If you were in the UK this Bank Holiday weekend, the chances are that you would have enjoyed some lovely weather.

Indeed, the spring sunshine has a habit of making us look forward to the summer ahead, and for golf fans that means three majors in the space of four months.

The good times continue this week at the Players Championship, the sport’s unofficial fifth major, that takes place in the ever-sunny Florida.

It’s a huge tournament, with a lucrative paycheque up for grabs and the prestige of winning at one of golf’s premier layouts, the picturesque TPC Sawgrass, and its infamous seventeenth hole featuring the island green.

It’s an event that any of the big boys would love to win, and yet many have rather mixed records around this course: Dustin Johnson has finished no higher than twelfth in ten visits, Jordan Spieth has missed three consecutive cuts and Rickie Fowler, ever unpredictable, has finished first, second and sixtieth here and missed five cuts into the bargain!

The feeling that the big names are vulnerable is lent weight by the identity of last year’s Players Championship winner. Si-Woo Kim, the talented young Korean, was in in a horrible run of form leading into the tournament, and yet he managed to hold off the challenge of JB Holmes, Ian Poulter and co – not bad for a 750/1 outsider!

Suggesting a repeat of that lofty price is rather optimistic, and indeed the cream tend to rise around Sawgrass: the list of recent winners includes Jason Day – who took down last week’s Wells Fargo Championship, Fowler, Martin Kaymer and Tiger Woods, amongst others.

So where is the smart money going?

Rory to Make Hay in the Florida Sun?

One of the few elite players to truly enjoy themselves around Sawgrass is Rory McIlroy, although he still awaits that elusive ‘W’ around this stretch found in Ponte Vedra, Florida.

The Irishman has notched three top-10s and a 12th in his last five visits to the area, and that’s a handy insight given that he has been in fine form of late.

He won the Arnold Palmer Invitational back in March, and followed up with a top-five return at The Masters; played at the devilish Augusta National layout that delights and detests the players in equal measure.

So all is well in the McIlroy camp, and of all those at the head of the market he surely represents the best value. Jason Day is of interest of course, but we have seen before how difficult it is to win back-to-back events and for that reason he has to be cautiously swerved.

Patrick Reed is another with obvious appeal given his win at The Masters, but he has found winning generally quite hard to come by over the years, whereas Rory has that indefinable ‘X factor’ that characterises winners.

Plenty of Value for Punters to Plunder

Newcomers to golf betting may not be aware that there is plenty more to the game than simply picking winners.

There are stacks of side markets, and a couple of the most popular are the Top 10/20 Finish categories. And there are plenty who catch the eye this week.

A player who is on a fine run of form is Bryson DeChambeau, who has finished inside the top-10 in three of his last four starts. If he can repeat the feat this week, it will pay at a handsome 6/1. 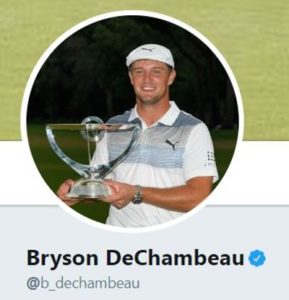 DeChambeau isn’t everybody’s cup of tea, but his scientific outlook does lead to some fantastic approach play; a pre-requisite when trying to dink iron shots into these tiny greens. He hits long and straight off the tee too, and so has every chance of creating the opportunities needed to win high-profile events like the Players.

A notable mention in this market should also go to Zach Johnson, the former Open champion whose game is also trending in the right direction. He loves it around Sawgrass with 11 cuts made in 12 starts and five top-20 returns, and he’s not far from cracking the big ten here. At 7/1, it is certainly worth a flutter.

There are options galore in the Top 20 category, and one of the very best is Brian Harman at a handsome 4/1.

He very rarely plays badly, and he particularly thrives at courses where the onus is on precision rather than power. The designer of Sawgrass is Pete Dye, one of the most respected course architects in the game, and Harman tends to have a habit of showing up well at his layouts. Punters will be hoping that lightning can strike once again in sunny Florida.