It is the news that all England fans wanted: Gareth Southgate has confirmed that Harry Kane will start for England against Belgium.

The Tottenham striker has been in fine fettle in Russia so far, bludgeoning five goals in just two outings against Tunisia and Panama thus far.

And rather than give his frontman a rest ahead of the knockout phase which the Three Lions have already qualified for, the manager has confirmed that Kane will start against Belgium and come up directly against his Spurs teammates, Jan Vertonghen and Toby Alderweireld.

“His scoring record of goals per game is outstanding,” Southgate said. “He is only behind Gary Lineker in terms of World Cup goals for England, and that is a wonderful personal achievement for him.

“Equally, he is the captain and he knows he will be judged on how far we go as a team. He wants to contribute to a winning team, and he knows it is not as satisfying if you are a player scoring goals and the team does not win.”

When pushed as to whether Kane would start against Belgium, the manager referred to the player’s quest for the Golden Boot trophy.

“As a manager you have to think of the whole squad and then your second thought is for individuals and their own situations, and that is a really complex balance in any business where you are managing people.”

In short, yes, we expect Kane to continue up front up for the Three Lions, and that will please those who have backed him in that Golden Boot market no end. He leads the hotshot charts with five at the moment, and that has seen the bookies install the 24-year-old as the 7/4 favourite.

But with Romelu Lukaku and Cristiano Ronaldo hot on his heels on four, and a cast including Diego Costa, Luis Suarez, Philippe Coutinho and Eden Hazard just a couple behind, every minute on the pitch will count for the England striker.

Here’s a quick look at Kane’s main rivals for the Golden Boot prize.

The Manchester United man picked up a knock against Tunisia and was substituted before the ned of the game, and according to reports he still hasn’t returned to full training as of Wednesday.

And that means he’s unlikely to be in the side against England on Thursday – good news for Three Lions supporters – but less good for those who have backed him in the Golden Boot stakes.

He should return for his side’s last 16 clash against Japan, Senegal or Colombia, and you could easily see him netting against any of those sides.

There is a chance that Belgium could go a long way in this competition, but until matters in Group G have resolved themselves we won’t know if it’s Lukaku or Kane who is in the driving seat.

Portugal’s talisman bagged four in his first two games in Russia, but a blank against Iran – and a last 16 draw against a Uruguay side yet to concede in the competition – has seen Ronaldo’s Golden Boot price slump as low as 6/1.

The Real Madrid man is seemingly capable of anything on the football pitch, but even he has his work cut out single-handedly carrying a lacklustre Portugal side any further than the round of 16.

Diego Costa grabs the goal for Spain to make it 1-0 pic.twitter.com/ZZrnfSym2Q

The former Chelsea striker is just two back from Kane, and with a last 16 tie against Russia to come his Spanish outfit will be confident of progressing to the business end of the competition.

Spain averaged two goals per game in the group stage, and so Costa leading the line ahead of a midfield featuring Isco, Iniesta, Koke, Silva and co must be feeling confident that there are more goals to come.

Many sportsbooks are still paying out three places on each way bets in the Golden Boot market, and so at 10/1 it is Costa who looks the value punt given Spain’s likely progression. 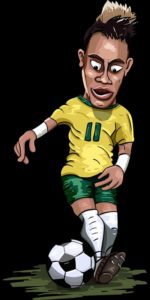 He’s only got one goal so far, but with a game in hand, so to speak, there is still plenty of money coming into the market for Neymar.

The Brazilian has been kicked, pushed and prodded so far by some brutal marking from Switzerland and Costa Rica, and his inability to maintain his cool in such provocation is as likely to lead to a red card as it is further goals.

That said, a final group match against Serbia should yield a positive result; if they top Group E, a possible last 16 clash with Germany awaits!

Previous Post: « England vs Belgium Preview: England Expects…. But Can the Boys Deliver?
Next Post: World Cup 2018 Name the Finalists: Are Brazil and Spain on a Collision Course? »