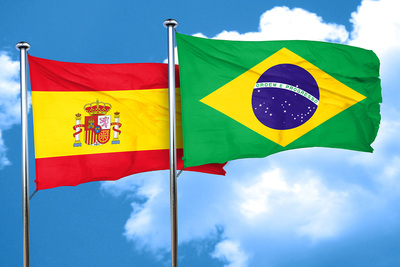 If you believe the bookmakers, the final of World Cup 2018 will be contested by Brazil and Spain.

That pairing has been priced at approximately the 6/1 mark across the board, which is at least half the price of a France vs Spain (12/1), Brazil vs Belgium (14/1) or Brazil vs Croatia (18/1) final.

Given the two countries’ history in this competition it makes sense, but are their runs to a potential final really that easy?

The 2018 edition of this fine tournament has thrown up plenty of surprises already – cough, Germany, cough – and so we can safely assume that there will be more shock results and upsets to come.

So here are three potential World Cup 2018 finals which you can ‘dutch’ to enhance your chances of a payout, or bet as singles if you are feeling particularly lucky.

After all, as we’ve seen so far, anything can happen….

The Sensible Play: Brazil vs Spain (6/1)

Siding with the bookmakers is savvy – they employ teams of analysts and traders to protect their profits – and at the moment a Brazil vs Spain final is their prediction.

It certainly makes sense give their respective draws, too. If you are going to win a World Cup, you will need to beat good teams so there’s no such thing as an ‘easy’ draw.

But for Spain, in the bottom half, the picture certainly looks a lot clearer.

They face Russia in the Round of 16, which is as comfy as it gets to be fair. Yes, they are the host nation, but Uruguay showed that by getting on top early you can silence the home support quite easily. The Russians were fortunate to be drawn in an easy group, but the end is surely nigh.

That sets up a potential quarter-final with Croatia, who are fancied to overcome Denmark. Like we say, there are no easy games at this stage of the competition, but the Spaniards just about have the edge on Luka Modric and co.

That leads them to the last four against a side from the very bottom of the draw: England or Belgium, depending on who finishes where in Group G, Sweden or Switzerland, Senegal, Japan or Colombia.

As for Brazil, their passage will require them to beat Mexico and then one of Belgium, England, Japan, Senegal or Colombia in the quarters; and either Uruguay, Portugal, France or Argentina in the last four.

Nobody said it would be easy, but Spain vs Brazil looks to be the most likely final if you want to play the percentages.

France reached the final of Euro 2016 without ever quite being at their best, and they will be desperate to go one better in Russia on similar lines.

They look a decent bet because Argentina, their Round of 16 opponents, look to be a spent force. Emotionally exhausted after weeks of in-fighting and controversy, and physically drained after only securing their last 16 spot in the last five minutes of their final group game, Messi and co could struggle to raise their game on Saturday.

And then comes a quarter-final against Portugal or Uruguay. To reiterate, there is no easy path to the World Cup final, but at this point France would be 180 minutes from the showpiece occasion.

If they can just click into gear, Les Bleus could accelerate through the latter stages of the competition.

As for Spain, well, just read above for more info on why they will be a tough nut to crack at the business end.

This is a wager that assumes Belgium lose to England on Thursday night in the Group G concluder, but with Roberto Martinez set to make wholesale changes to his starting eleven that is certainly possible.

From there the Belgians have that route we’ve spoken about: the Group H winner, then Switzerland/Sweden and finally Spain/Croatia a likely semi-final.

Uruguay just have something about them. Solid at the back and with the Suarez-Cavani front pairing, they have the ability to grind out results and there’s every chance they will prove too strong for Portugal in the Round of 16.

And from there we’re throwing the usual potential names into the hat for opponents: France or Argentina, Brazil or England.

But these Uruguayans know how to defend, and if you keep a clean sheet you’ve every chance of winning a football match.