A pair of highly satisfactory friendly performances has given England fans a bit more confidence in their side’s chances ahead of the World Cup, and also presented Gareth Southgate with a few selection headaches ahead of the Three Lion’s first outing of the tournament against Tunisia on June 18.

First up was the 2-1 win over Nigeria, which was far more comfortable than the scoreline suggests. England settled into Southgate’s favoured 3-4-3 shape early, with Kieran Trippier and Ashley Young providing the width from wing back, Eric Dier sitting in front of the back three and Dele Alli and Jesse Lingard linking up in the middle with Raheem Sterling supporting Harry Kane.

The Three Lions romped into a 2-0 half time lead courtesy of goals from Harry Kane and Gary Cahill, and while it was a strong display it was frustrating to see Sterling bogged down in central areas rather than isolating himself against a marker in wider areas.

A couple of days later Elland Road was the scene of a 2-0 win for England over Costa Rica, as Southgate shuffled his pack once more.

A number of players were given run outs, and the likes of Trent Alexander-Arnold and Fabian Delph gave their manager some food for thought by putting in assured display.

Jordan Henderson started in midfield, but it was the pace and guile of Marcus Rashford and Jamie Vardy up front that really caught the eye. The former scored a cracking goal, while the latter terrorised the Central Americans’ defence in a display that hinted that a 3-5-2 system could be a Plan A or B for the Three Lions in Russia.

The two friendlies possibly confirmed a number of starters who will pull on the white shirt against Tunisia, but some eye-catching displays elsewhere may just have Southgate chewing the end of his biro as he scribbles down his starting eleven for his side’s opener.

So how will England set up against the North Africans?

We don’t know a huge amount about Tunisia, certainly in regards to playing against elite-level opposition European soil, but as with most North American sides we expect them to be hard working, diligent and strong in the tackle.

Their best known players, certainly to English football fans, are former Sunderland man Wahbi Khazri and Leicester’s Yohan Benalouane, who has barely had a look in during his time at the Foxes. In short, Tunisia are not an outfit blessed with huge stars.

They will play a variation of a 4-5-1 shape, and that means that England should enjoy plenty of possession. The hard part will be breaking down the banks of red shirts in front of them.

You suspect that Southgate’s team selection will feed into that notion, and he will look to attack from defence. So, Kieran Walker and Harry Maguire are likely to start at centre back, and they will be tasked with supporting their wing backs in wide areas. In between them, John Stones will be tasked with bringing the ball out from the back and drawing out the deep-lying Tunisia attacking line. 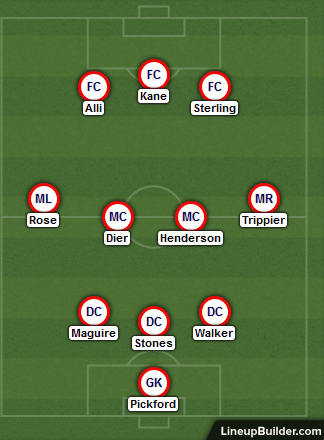 Width will be provided by Kieran Trippier, who appears to be ahead of Trent Alexander-Arnold in the pecking order, and Danny Rose, who faces a struggle against Ashley Young and Fabian Delph for the left wing back role. The takeaway point from the two friendlies was that Rose played 110 minutes or so and Young 70, which suggests that Southgate wanted the Tottenham ace to get some game time under his belt.

As mentioned, the onus against Tunisia will be to attack them and find a breakthrough, with little coming back the other way. So, we would anticipate that only one of the more defence-minded midfielders will start – probably Henderson over Dier – and that Dele Alli will play a deeper role with licence to break forward, as he did against Nigeria.

In attack, the temptation is to play two through the middle and really take the Africans on, but this is the first game of the tournament for the two sides and no risks are necessary. So, expect Lingard and Sterling to play in the half spaces (the old-fashioned ‘inside left’ and right) behind Harry Kane.

There will be times in this World Cup campaign when England are under the cosh, and at that point we will need an effective Plan B to rally through the storm. That could lead to some tough decisions, with Raheem Sterling and possibly even Harry Kane being left out.

Picture the scene: England are being pegged back by Colombia in the last 16; the South Americans being fantastic exponents of the possession game. The Three Lions simply cannot make the ball stick up front.

How about adopting a more direct approach here, pumping balls into the channels and turning their opponent’s defence around? There is plenty of pace at Southgate’s disposal, and as Vardy and Rashford showed against Costa Rica they could make for a deadly pairing.

You could bring in Dier alongside Henderson in midfield, move Kyle Walker to right wing back and bring in another defender like Gary Cahill. Suddenly England are a solid side who could be deadly on the counter attack, and that is a very exciting proposition indeed for fans of a side who have played dull, routine football in major tournaments for the best part of two decades.