Every single match of World Cup 2018 has had a stack of narratives, storylines and what, if’s and maybe’s about it, but few fixtures have been as dizzying as the Brazil vs Belgium humdinger on Friday evening.

It’s one of those games where you could see it being a bore draw, an end-to-end classic or something in between, but the signs suggest that punters and spectators could be in for a treat to end the working week.

Brazil will be without Casemiro, their defensive shield in midfield who is suspended. Fernandinho is likely to come in, but he lacks the pace and athleticism of the man he is replacing.

As for Belgium, they have shown little interest in defending throughout this tournament, shipping twice against Japan and Tunisia in performances which exposed their tactical inflexibility in wide areas.

Add into the mix a cavalcade of attacking talents, from Neymar to Hazard and De Bruyne to Coutinho, and the stage is set for a quarter-final cracker.

Attack is the Best Form of Defence

So far, Roberto Martinez has set his Belgian side up in a way that is designed to maximise their attacking intent.

Eden Hazard and Dries Mertens play high up the pitch and narrower than you might expect, supporting Romelu Lukaku in the final third. Kevin de Bruyne starts from deeper positions, while Axel Witsel is posted as the sole defensive concern in midfield.

In wide areas, Thomas Meunier and Yannick Carrasco bomb forward with abandon; often leaving their defensive posts to join in with attacks. As Japan showed, the space they leave behind can be exploited on the counter attack.

It would be a huge risk for Martinez to modify his system ahead of such a big game, but in interview he has hinted at it. “As a coach I have a lot of options with this team, but I know in my head what I want to do,” he has said. “We will need power. If we show the same mentality as we did on Monday, we have a big chance.”

That hinted at a starting berth for Marouane Fellaini, but more likely is that Mousa Dembele will come in and partner Witsel in midfield, with De Bruyne moving forward at the expense of Mertens.

That adds security in the middle of the park, but it doesn’t solve the problems in wide areas. Meunier and Carrasco will presumably still bomb on, and that leaves Alderweireld and Vertonghen exposed to counter-attacking forays from Neymar and Willian.

And you wonder if Vincent Kompany’s presence at the heart of defence is a hindrance, with the faster, more athletic Dedryck Boyata arguably a better option in this system. 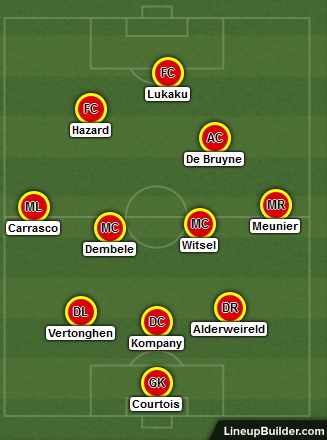 Stepping Into the Unknown

Belgium have only reached three World Cup finals since the tournament began, and that in itself brings with it pressure.

Their players bottled it at Euro 2016, going down to a hard-working but limited Wales side, and it was interesting to hear Vincent Kompany speak in such pessimistic terms this week.

“We are going to look them in the eye. But if we make this a match of individuals, then we’ll lose.

“If it becomes a match of individual performances we’ve got no chance. If we play as a team, if we fight for each other, we can do it and that’s what matters to me.

“We just have to step up to another level against Brazil. At least I hope we can.”

That’s not exactly the kind of tub-thumping, chest beating attitude you want to hear from a senior player in your squad!

Brazil have been there, done it and got the t-shirts, and a side made up of players desperate to make up for their hammering to Germany four years ago is going to be very tough to beat.

There are going to be so many little tactical nuances going on in this match, and so many individual battles, that it will be hard to stay on top of the action.

But ultimately football is about kicking a bag of wind into a net, and from that perspective Brazil just seem better placed to do just that – even without Casemiro.

The gung-ho spirit of Belgium is laudable but could prove to be their undoing, and even with the ultimate football Plan B of Marouane Fellaini on the bench, it would be a surprise if they were able to get out of jail twice in a row, as they did against the Japanese.

Will there be goals? You’d certainly expect so, and Brazil to Win & Both Teams to Score is available at a princely 7/2.