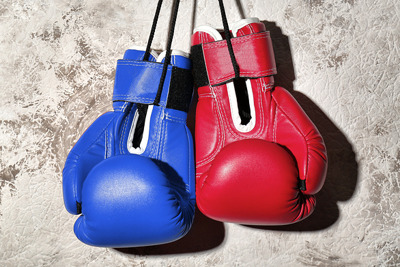 Two of the finest pound-for-pound British boxers around will lock horns in a mouth-watering clash on Friday.

George Groves and Callum Smith will meet for the Muhammad Ali Trophy, the spoils for conquering the World Boxing Super Series, the WBA super-middleweight title and for the pride that being regarded as the best super-middle on the planet brings.

Curiously, they will head to Saudi Arabia to get it on, with the 10,000 capacity King Abdullah Stadium in Jeddah on hosting duties.

It’s an odd twist to a fight that would have comfortably sold out arenas in the UK, but as is often the case money talks, and if the Saudis want to chuck their oil money at you then why not?

For Smith, it’s the first major fight of a career which has taken some time to get going at 28. But at least he doesn’t bear the bipolar experiences of Groves on the big stage, who has won and lost in front of tens of thousands of people on numerous occasions.

Only two years separate the pair, but experience is clearly on Groves’ side. Will that prove the differentiator, or can Smith strike another blow for boxing’s young guns?

The Case for Groves

When George Groves was knocked out cold by Carl Froch in front of 80,000 people at Wembley Stadium in May 2014, his career was at something of a crossroads.

A decent fighter with scalps including James DeGale and Callum Smith’s older brother Paul on his CV, Groves pocketed a share of the £22 million generated by the Froch encounter.

He may have had that lightbulb moment there and then as he lay on the canvas. I’m rich, why do I need to get punched in the face for a living?

But as is often the case with boxers and sportsmen and women in general, there’s something inside them – a personal pride, perhaps – that forces them onwards.

And so the 30-year-old persisted, bouncing back before another heartbreaking defeat to Badou Jack in Las Vegas. Would Groves ever be a world champion?

Something had to give, and in came Shane McGuigan as trainer. It was a move that would change Groves’ career forever.

Suddenly, his aggression and undoubted technical ability were laser-focused, and big wins over Martin Murray and Eduard Gutknecht forced Groves back into the world title picture.

This time, lighting would not strike thrice as Groves delivered a punch-perfect performance in dispatching Fedor Chudinov – who had never been knocked out until he met the Englishman.

Last time out Groves was involved in a right old tear-up with Chris Eubank Jr, winning on points after dominating all three of the judges’ cards.

And that brings us up to date about a fighter who has experienced incredible highs and crushing lows in a 31 fight career, but whose game has been upped markedly since hooking up with McGuigan back in his darkest days.

The Case for Smith

The write-up for Callum Smith is a doddle compared to that of his opponent.

It’s a resumé which features 24 fights, 24 wins and not so much as a split decision to test the resolve.

Smith is a big old unit at the super-middleweight mark, and he has used his power to serve up 17 wins by way of KO.

But he’s part of the Smith boxing legacy, and that brings with it plenty of technical ability given that a couple of his siblings have also fought for world titles.

It’s a hitlist that is lacking in star names, wins over Rocky Fielding and Christopher Rebrasse, and in answering the question ‘how good is Callum Smith?’ the simple answer is who knows, he’s never really been tested!

There’s a gulf of experience here, with Groves having fought for, or defended, world titles on six separate occasions, including blockbuster nights at Wembley and the MGM Grand in Vegas.

Smith has never had the privilege of world honours, and he’s rarely fought outside the north of England either.

The Liverpudlian has struggled to see off his last two opponents in the Super Series, albeit winning comfortably on the cards, and so we have to ponder how he will fare taking on the best opponent he has ever met between the ropes.

Froch, Jack, Chudinov, Eubank Jr….Groves has been in with some terrific fighters and enjoyed moments of success in all of them; who can forget his stunning first round knockdown of the Cobra in their first fight.

Smith has physical advantages in height (around three inches) and reach (six inches), but under McGuigan it’s been evident that Groves has found a way to get the job done no matter whom his opponent has been.

His big fight experience should also prove telling, and at odds of 8/11 it is Groves who holds plenty of betting appeal. Groves on points, at 7/4, is a blockbuster play.