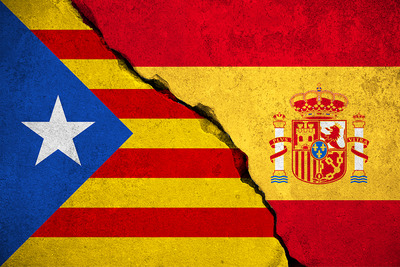 The layman might think that football matches played between Real Madrid and Barcelona are merely that; a chance to win three points and assert authority in the race for the Spanish La Liga title.

But it runs much deeper than that. These two teams represent cities with wholly opposite political and sociological ideologies, and for many years they have even played the game of football in different ways.

They say that opposites attract, but in the case of El Clásico – as the fixture has been known since the start of the 21st century – it has only served to create a divide that transcends the 22 players on the pitch and the thousands in attendance.

To give some kind of context, the average worldwide TV audience for El Clásico is 500 million, which puts it in the realms of World Cups, Olympic Games and Super Bowls. It really is that big of a deal.

A Tale of Two Cities

Barcelona is a symbol of rebellious left-wing politics in the country, and many of its inhabitants identify as Catalonian. You may have seen on the news in recent times the conflict in the region, with Catalonians seeking independence from the mainland as an autonomous community free of central rule.

That unrest dates back decades to the rule of General Franco, whose coup during the Spanish Civil War overthrew the more progressive Popular Front and introduced conservative politics to the country. Franco was aligned to Real Madrid for a number of years, and hence why the club are looked on distastefully as the ‘team of the establishment’.

The rivalry still exists along similar lines to this day, and such contrast even transmits to the playing styles of the sides. Barcelona, who reinvigorated the ‘tiki taka’ approach of possession football, have been powered by the majestic Lionel Messi for a number of years.

Real, meanwhile, are more renowned for spending huge amounts of money gifted to them by president Florentino Perez.

That win at all costs approach is viewed as counter to the basic tenets of the beautiful game, and explains why many neutrals favour the sublime Barca style over the rather more mechanical Madrid approach.

Blood on the Streets….And On the Pitch

The rivalry between Barcelona and Real Madrid on the pitch had been simmering away for years, but really came to a head during one Copa del Rey tie in 1943.

The competition had been renamed ‘Copa del Generalisimo’ as a nod to the ruling General Franco, and his iron grip had a clear and profound impact upon the outcome of the match.

Barcelona had won the first leg 3-0, with Real complaining about all three goals allowed by the referee. The Madrid side’s aggressive tactics and general dirty play were treated with disdain by the watching Barca fans, who whistled every time one of the Real players came into possession of the ball.

Stopping just short of alleging that the referee was bribed, the Madrid based media whipped up a frenzy ahead of the second leg, and Barcelona fans were banned from travelling to the city for safety reasons. On the day of the game, the Barca team bus was pelted with stones and coins, and during the game their goalkeeper Luis Miro could not retreat to his goal-line for fear of being struck by glass bottles thrown from the crowd.

Real went 2-0 up before Barca’s Benito Garcia as sent off for what most onlookers referred to as a normal tackle. At this point, they basically gave up, sensing that their efforts were worthless with Franco watching on. The game ended 11-1.

It was here that the rivalry between the symbol of the dictatorship and the rebels was born.

The rivalry between Barca and Real was kept on the simmer for decades, and really came to the boil as one of the most bizarre transfer deals in history unfolded.

Luis Figo was an icon at Barcelona. As part of a deadly frontline with Patrick Kluivert and Rivaldo, the Portuguese ace won La Liga and Cup Winners’ Cup trophies, and was eventually named vice captain of the club.

Real Madrid presidential candidate, Florentino Perez, offered Figo a deal: he would personally pay him $2.4 million to sign a contract that stated if Perez won the vote, the winger would join the club from Barcelona.

Figo initially denied such a deal existed, but when Perez was announced as Real president Figo was unveiled as the club’s record signing just 24 hours later.

Naturally, the Barca fans were not overly enamoured by their former talisman’s decision, and they let him know about it the next time he visited the Nou Camp with his new teammates. The Portuguese international was pelted with bottles, cigarette lighters and golf balls, and instructed not to take corners for his own safety.

Those fevered feelings were taken to the next level a season later, when Figo – displaying notable chutzpah – started to take set pieces again in the latest instalment of El Clásico, and visibly mocked the Barca faithful with ironic clapping when they bombarded him with missiles.

At one point the game had to be delayed for more than 20 minutes while the debris was cleared, and at this point one of the most iconic images in the Barcelona vs Real Madrid rivalry – the pig’s head – was shown on camera.

#OnThisDay on 2002, Luis Figo returned to the Camp Nou as a Real Madrid player…

Cue a severed pig’s head thrown at his feet ?? pic.twitter.com/TEWSgiuYmQ

Messi vs Ronaldo: A Rivalry for the Ages

If any two players in the modern era best sum up the rivalry between these two famous outfits, it has to be Cristiano Ronaldo and Lionel Messi.

We’ve written about the contrasts between the two cities and the clubs as a whole, and this pair of world-class talents also help to summarise the key differences in all their glory.

What do the stats say about the Ronaldo v Messi debate?

Ronaldo is the epitome of ‘a winner’. Supremely gifted, yes, but less technically so than Messi, CR7 has at times almost single-handedly driven Real Madrid and his national side Portugal to glory, and you could make a case for him being labelled as the most impactful footballer that has ever set foot on the turf.

Messi, meanwhile, is an altogether different beast. He grew up on the mean streets of Rosario in Argentina, where football is the main source of release from poverty and crime. Playing in the streets every day, the diminutive winger honed his famous ball control, and he remains one of the most technically-gifted players to ever lace up his boots.

They are opposites as personalities too, with Messi largely opting to shun the limelight (and that’s got nothing to do with his slightly dodgy tax dealings!) and Ronaldo always happy to take centre stage.

They have dominated the El Clásico for the past decade, but Ronaldo’s move to Juventus – and Messi’s broken arm – means that the October 2018 meeting between the sides at the Nou Camp was the first time in eleven years where neither has featured.

The difference, you fancy, will be stark, with neither talisman on the pitch. Between them, they have blasted 44 goals in the El Clásico, but you would argue that Barcelona will miss out the most. Nobody has scored more goals in this fixture than Messi, and of his 26 strikes 18 have come in La Liga matches between the two teams, whereas nine of Ronaldo’s 18-goal haul came in the Copa del Rey or Super Cup matches.

The Argentine has also assisted more El Clásico goals than any other player in history, and is one of a select group of five players who have more than one hat-trick in the famous fixture to their name – a club that CR7 does not belong to.

What Does El Clásico Mean?

We’d love to be able to give you some great insight or facts to wow your friends with here, but unfortunately the origins of the El Clásico name are rather dull!

The term translates from Spanish to English as ‘the classic’, which refers to the status of the two clubs in the wider history of Spanish football.

The October 2018 fixture will be the 239th competitive meeting between Barcelona and Real Madrid, and the 178th in La Liga.

The head-to-head results are staggering, because for all that time and energy expelled there is still only two wins between them: Real Madrid holding a narrow 72-70 lead as far as El Clásico wins are concerned in meaningful competitions, with 35 draws.

When the stakes are highest, Real also seem to hold the aces. They have three wins to Barcelona’s two in the Champions League, with three draws.

And an investigation into the two clubs’ trophy cabinets also gives the Madrid outfit the edge. They have 33 La Liga titles to Barca’s 25, and they have lifted the European Cup (now the Champions League) on 13 occasions, with the Catalans getting their hands on the trophy five times.

If we look at the past decade in microcosm, we note a slightly different pattern to the one of Real Madrid dominance that had gone before.

In the summer of 2008, Barcelona employed one Pep Guardiola as head coach; and a sea-change started to unfold.

This also coincided with the end of the original ‘Galacticos’ era at Real Madrid, where the likes of Figo, Ronaldo, Beckham, Zidane, Raul, Roberto Carlos and, erm, McManaman all combined to bring glory to the city.

Barca, under Guardiola, won five and drew one of their next six El Clásico appearances, as a new order was installed. It’s no surprise to learn that this was one of the most dominant periods in the Catalan giants’ history.

If we fast forward to the modern day, we note that Barcelona are also unbeaten in their last four El Clásico encounters (W2 D2 L0), and you wonder if the loss of Ronaldo will leave Real in the doldrums for several years to come.

As we have come to know, there is a distinct home field advantage in sport, and particularly so in football.

There’s no proven reason for that other than comfortability; and the fact that a higher percentage of spectators are cheering rather than booing you.

It’s a trend that largely continues to El Clásico, and particularly so when Barca host their rivals at their majestic Camp Nou home.

A return of W6 D6 L3 in La Liga and Champions League matches against Real might not look that impressive on paper, but remember that the Madrid side are routinely crowned the best team in Europe – and let’s face it, probably the world – on a regular basis.

By that token, it’s a staggeringly good record, and one that will give Barca supporters plenty to cheer about the next time they host the Galacticos on home soil.