Thursday sees the third gameweek of the Europa League 2018/19, and for English football’s two representatives it has been plain sailing so far.

Both Chelsea and Arsenal have taken maximum points, and looking at their fixtures this week it would be a surprise if that trend did not continue.

As for Rangers and Celtic, it’s been something of a mixed bag. Stevie Gerrard’s boys are flying at the moment, but Celtic – not helped by a tough draw – could do with beating RB Leipzig this week in order to keep their qualification hopes alive.

Can they do it? Let’s take a look in our Europa League betting tips: 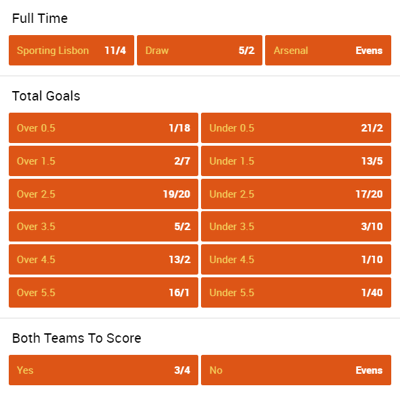 Arsenal were simply imperious in Monday night’s win over Leicester, and there must be small part of Unai Emery that is tempted to field the same starting eleven that finished that game here.

But he’s a smart cookie, and he will know that the Gunners have bigger fish to fry this season.

The good news is that they sit top of Group E with six points, and so he can make changes here and rest players without damaging their season to any great extent.

You may recall the commotion at Sporting Lisbon at the tailend of the season, when a bunch of ‘fans’ broke into the club’s training ground and attacked players and staff.

Naturally, some wanted to get the hell out of there, and so the likes of Rui Patricio, William Carvalho and Gelson Martins left or pastures new.

The upshot is that Sporting are a shadow of their former selves, and currently sit as low as fifth in the Portuguese Primeira Liga.

As far as a betting angle goes here, it’s tricky to make a big call until we have seen Emery’s team selection. But anything approaching a strong starting eleven, featuring the likes of Welbeck, Ramsey and either Lacazette or Aubameyang, will have enough firepower to see off the Portuguese side.

At that point, the 11/10 about an Arsenal victory becomes great value indeed. 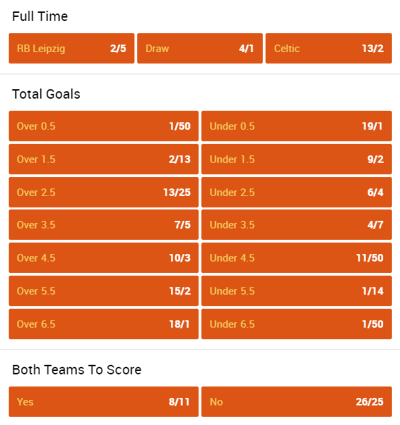 Celtic have their work cut out against a decent RB Leipzig side.

The Germans have only lost once in the Bundesliga this term, and come into this one with a 6-0 win over Nurnberg fresh in the memory.

All is not well at Celtic, that much is obvious, and while they continue to claw at Hearts in the Scottish Premiership they are still encountering problems; they made hard work of the 4-2 win over Hibernian on Saturday, for example.

The Hoops were well beaten in Salzburg in this competition, and it’s hard to imagine them having any greater joy against one of Germany’s strongest teams.

So, Leipzig with a -1.00 Asian handicap at 4/6 offers a touch of value; our stake will be refunded if they win by one goal, with a full payout if they triumph by two or more. 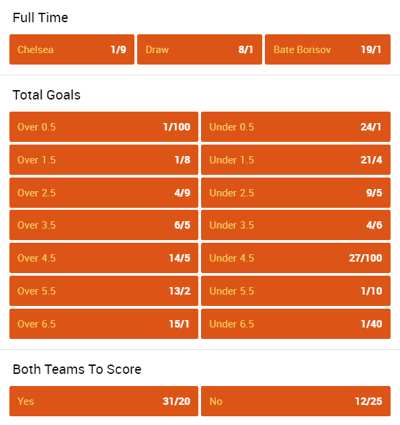 When you look at Maurizio Sarri’s team selections for Chelsea’s opening pair of Europa League matches, you might draw the conclusion that the Italian is keen on progressing in the competition.

And why not? He’s got a strong squad these days with two decent players in each position, and that affords him the luxury of mixing and matching his starting eleven.

The Blues should have no problem seeing off a game BATE Borisov side at Stamford Bridge. The Belarussians were stuffed 1-4 by PAOK in their most recent game in the competition, and that hardly bodes well for success on Thursday.

With Chelsea priced at 1/7 there’s not a huge amount of value to be found, and in such cases it is often better to plunder the Anytime Goalscorer market for your best bets.

Thinking logically, there are two players that are almost guaranteed to start against BATE: Pedro and Cesc Fabregas. That pair can be backed at 11/8 and 7/2 respectively to find the net at any point. 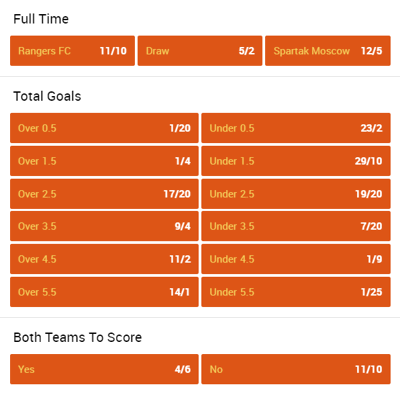 Things are going pretty well for Steven Gerrard at Rangers.

The Gers have won four of their last five in the Scottish Premiership, and won them well: 4-0, 5-1, 3-1 and 4-1. They’ve also got off the mark with two victories in the Europa League, so all is rosy.

Thursday’s opponents, Spartak Moscow, have got off to a bizarrely poor start. They sit a lowly seventh in the Russian Premier League, and lost 0-2 at Rapid Vienna in this competition.

Clearly, the loss of their best player (Quincy Promes to Sevilla) has affected them, with creativity hard to come by – they’ve scored just 12 in 11 domestic matches.

The Russians will be a tough nut to crack on their own plastic pitch, but away from home they are a rather softer proposition. Rangers, with confidence high, are worth backing here at 5/4.