Aston Villa have sacked Steve Bruce this afternoon, just hours after a topsy-turvy home draw with Preston and a bizarre assault by one of the Villa faithful.

It was, nominally, just your typically nondescript set of midweek fixtures in the Championship.

But the second tier did not fail to deliver as an action-packed set of games culminated in Aston Villa boss Steve Bruce being attacked with a cabbage.

Yes, you read that correctly.

The Prelude to Cabbage Gate

Okay, so it was hardly an attack, more an inaccurate throw of the innocent vegetable in Bruce’s question.

It came towards the end of a titanic collision with Preston at Villa Park, where the hosts took a 2-0 lead before going down 2-3 as the Lancashire side rallied.

To say the Villa fans were disgruntled is something of an understatement after experiencing what must feel like a defeat, and cabbage-gate was the bizarre, but headline-making, culmination of a string of poor performances from the West Midlanders.

The incident raises a number of questions. Firstly, what kind of lunatic takes a cabbage to the football? It’s not as if while everyone else is tucking into their half-time pie and pint you an be off perusing the veg aisle.

More pertinently, it begged the question how much does Steve Bruce have left in the hotseat? And where do the Villa go from here? Eventually Bruce survived less that 24 hours as he was dismissed on Wednesday afternoon.

Quality Not Always a Surety of Success

When you look at the players Aston Villa have signed in the past couple of years, it almost beggars belief that they now find themselves in mid-table obscurity in the second tier.

Premier League experience in John Terry, Whelan, Ahmed Elmohamady and Robert Snodgrass, allied to the players that stayed at the club following their relegation to the Championship, should have been enough to see Villa promoted at the first time of asking.

As it was, they fluffed their chance of automatic promotion, and went on to lose in the play-offs.

Severe financial problems were revealed in the summer, and so Bruce had to batten down the hatches. Even so, he found enough loose change down the back of the sofa to bring in John McGinn, Bolasie, Tammy Abraham and Anwar El Ghazi; again, all players who should shine in the second tier.

Quite why Bruce hasn’t been able to bring them all together in a coherent, winning formula is anybody’s guess, but the Villains find themselves in 12th place having won just three of their twelve outings to date.

Whichever way you slice and dice it, things do not look promising for boys in claret. The below graphic is our Expected Points (xP) model, which ranks sides based on their attacking and defensive output. This suggests that Villa are, well, lucky to be 12th, truth be told. 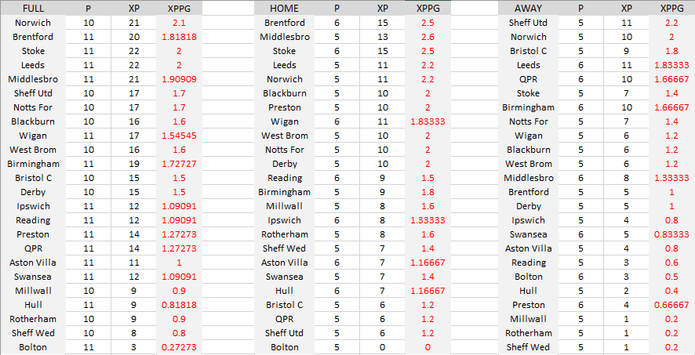 You can still access the various Championship outright markets offered by the bookmakers, with the odds provided in each naturally changing to reflect this flowing and ever-unpredictable division.

There are two markets in particular that really catch the eye, and there’s still time to get involved before the value completely disappears from the game.

First up, the Villa are 8/15 to finish outside the top six this season with a number of books.

Now, that looks almost guaranteed, and despite the paucity of the odds still warrants investment. The board had given Steve Bruce their vote of confidence in the summer when rumours of Thierry Henry being appointed were circling, but they have gone back on their word and sacked him less than a quarter of the way through the campaign.

Had the former Manchester United centre back remained at the club, it was hard to see how they could progress from here. In his time in charge he had tried a myriad of players and formations, and nothing has really worked with any great consistency. Can the new man in charge turn the ship around?

Secondly, and this is for the more masochistic punter, you can access 11/4 on Villa to finish in the bottom half of the table.

That’s more of a longshot, as a managerial change will surely precipitate an improvement, even if only in the short term.

That said, if Sheffield United or Blackburn draw tonight they will push the Villains down into that bottom half, and so it will take some kind of turnaround or intervention for them to reach the dizzying heights of the top 12 once more.

Who Next for the Villans? 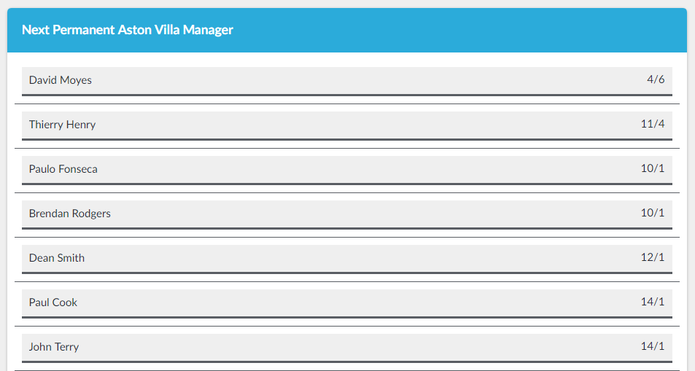 And so the Aston Villa board begin their search for a new manager in earnest. They travel to the capital on Saturday to take on Millwall, but after that the international break ensures they have enough time to get in the right man as they plot to climb the Championship table sooner rather than later.

The bookies have moved fast to price up the market, and their odds suggest there are five men in with a sniff of taking the Villa Park hotseat.

What you tend to find is that when there is a big move in these Next Manager markets, the money tends to come flying in; the notion that somebody, somewhere, knows something has invested heavily gets other punters hot under the collar.

On paper, the Moyes appointment looks a logical one. He did good work at Preston, Everton and in his last employment at West Ham, a troubled outfit that the Scot stabilised to some extent.

But his managerial reputation was tarnished after spells at Manchester United, Real Sociedad and Sunderland, and it was telling that he resigned a day after the Black Cats were relegated to the Championship. Maybe Moyes just doesn’t fancy managing in the second tier?

That said, if he’s holding out hope of a Premier League job he might be waiting by the phone for quite some time.

The key point for rumination is that Moyes hasn’t managed in the Championship in nearly 20 years, and you would figure that the Villa owners would want to appoint someone a) with a huge profile, or b) who has been involved in the sharp end of a promotion bid from the second tier in recent times.

It was rumoured in the summer that the clubs new ownership team were courting the Arsenal and France legend, but something more concrete failed to materialise.

Henry is believed to want to get into management as soon as possible after turning in his Sky Sports punditry job, and a stint as assistant to Belgium boss Roberto Martinez, who reached the World Cup semi-finals, is said to have whet his appetite further.

Will he want to step into the cut and thrust world of the Championship in his first role though? It’s a brave move to risk your reputation in such a difficult division – your managerial career could end quite sharply with a bad job done here, and so you have to respect the likes of Frank Lampard who have tried their luck in the second tier.

As for Henry, his reputation travels, and he could surely land a plum job on the continent that would not require him to travel to Rotherham away on a cold Tuesday evening.

Rumours suggest that Rodgers doesn’t know whether to stick or twist at Celtic.

On the one hand, he’s got a job for life if he can continue to dominate the Scottish Premiership.

But Rodgers himself is said to be frustrated by Celtic’s lack of progress in Europe, and that has also reportedly led to a strained relationship with the Hoops’ chief executive, Peter Lawell.

You suspect that if Rodgers was to leave Celtic Park it would be for a Premier League side, but the chance to manage a fallen giant like Villa doesn’t come along all that often.

An Aston Villa supporter as a child, Smith is one of the few on this shortlist with Championship credentials.

Three times he has guided current club Brentford to mid-table security, and in the meantime he has built a reputation for favouring attacking, entertaining football – that would help to get the Villa Park faithful back on side.

The Bees are off to a decent start in 2018/19 too, and so Smith might need some persuading to head north.

But at 12/1 and with his obvious connection to the club, he does represent the value bet in the field.

Villa, who have their own financial problems to sort out, would surely love a man at the helm who can operate successfully on a shoestring budget.

But this would be a huge ‘promotion’ for Cook in the sense that he hasn’t worked with this calibre of player before, and the last thing the Villains need to do now is make a risky appointment.

“If any Wigan fan throws a cabbage at me, there’ll be trouble” ? ?#WAFC boss Paul Cook has his say on the sacking of Steve Bruce at #AVFC pic.twitter.com/goqGlL1zhH

Cook’s status as something of a legend at Wolves would perhaps also preclude him from taking on the role at their West Midlands rivals.