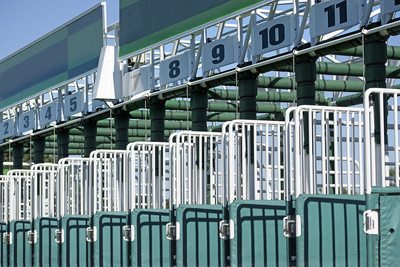 The draw has been made for the stalls that will contain the runners and riders for this year’s Prix De l’Arc de Triomphe, and defending champion Enable has been rewarded with a lovely draw as she looks to become only the second horse in thirty years to defend her crown.

The John Gosden four-year-old will launch her campaign from stall six at the revamped ParisLongchamp track, which is hosting its first Arc since 2015.

One horse Enable won’t have to tackle is stablemate Cracksman, who has been withdrawn in an attempt to protect him for a Champion Stakes defence later in October.

But an intriguing to the Arc field has been Sea of Class, the Irish and Yorkshire Oaks champion who will be looking to emulate her sire, Sea the Stars, who won this renewal back in 2009.

Connections have paid a supplementary cost of some £107,000 to add the three-year-old to the field; a drop in the ocean compared to the total prize fund of £2.5m available, which makes the Arc the richest renewal in European racing.

The downside for Sea of Class and trainer William Haggas is that she has been handed stall number 15 in the draw; far from ideal. She will have to run some race to get into contention.

Indeed, fans of such things will note that six of the last seven Arc winners have been female, and that the half-dozen all races from stalls 1-6. Before you place your bets on Sunday’s renewal, let’s familiarise ourselves with those handed a happy handy draw.

Why does the draw even matter, you might be thinking, surely the fastest horse on the day will find a way to win?

It’s a fair point, but we suspect the stall number might be more of a factor again now that the Arc has returned to its traditional Longchamp home after a temporary stay at Chantilly.

This is a sweeping, undulating track, and there can be no doubt whatsoever that having the initial inside line is a huge help.

There has also been below average rainfall in Paris at this time of year, so whereas the renewal often goes off at good-to-soft or squidgier, this year it may even start on good going. The point? That will lead to a faster race, where being up near the front should pay dividends.

Of course, if you are lacking in quality anyway the draw won’t make much difference, which is why the betting market isn’t going wild to back the horse in stall one, Clincher.

The Japanese horse has been 66/1 for weeks now and hasn’t shortened since the draw was made; a sure sign that he lacks the class to threaten here. Yet to win a Group 1 outing, Clincher was beaten by some eight lengths in his last start.

There’s similarly little interest in the horse exiting from stall two, Patascoy. The three-year-old only has two senior starts to his name, and while one of those was a fine runners-up effort in the French Derby, there has been little to suggest the local horse has the gears to go through to challenge in one of the most prestigious races on the planet.

Nelson, in stall three, is the 200/1 outsider, and despite coming from the Aidan O’Brien yard offers little value to punters other than to act as a line-runner for the clearly more talented Kew Gardens.

Another Ballydoyle runner that does pose questions is Capri, the former Irish Derby and St Ledger winner who has been out for much of 2018.

Two comeback races have yielded a win at Naas and a fairly tame effort at Longchamp last time out, but at 25/1 you could do worse than an each way flutter on a horse with a nice draw and Group 1 pedigree in the locker.

Sweet draw or otherwise, it will take some convincing for punters to pour into the 150/1 shot in stall five, Tiberian.

Seventh in the Melbourne Cup a year ago, it has also been more than 12 months since the French horse tasted success in any company; let alone in an elite field like this.

Second Time’s a Charm for Enable

All of which leads us to Enable, the bookmakers’ favourite at 11/10 and a horse who won’t have to overturn the history books to get the job done.

A filly aged four and in stall six, many of the boxes have been ticked for punters already, and that’s before you even consider her electrifying return to racing earlier in the year.

After spending much of 2018 on the sidelines, she returned to the track at Kempton Park in September.

Any trepidation from John Gosden and connections was blown out of the water when the four-year-old comfortably won the September Stakes over the classy Crystal Ocean.

A new course, yes, and in a season disrupted by problems. But any price above even money has to be taken up for a horse that is as backable as they come.

Previous Post: « Next Aston Villa Manager Betting: Bruce Sacked the Day After Bizarre Cabbage Attack
Next Post: Premier League 2018/19 Betting Tips: An Early Look at How the EPL is Shaping Up So Far »