On Sunday we will see the 176th competitive meeting between Manchester neighbours City and United; a rivalry that never ceases to amaze when the two teams meet.

The bragging rights are the fundamental prize for the players, staff and supporters of both clubs in the immediate aftermath of the Manchester derby, but with both sides entertaining notions of winning the title – or, in United’ case, a top four finish more realistically – the three points will also be most welcome.

Given their relative superiority in terms of domestic success and silverware, you’d be forgiven for thinking that City enjoy complete dominance over their neighbours from the red half of the city, but not a bit of it: Pep Guardiola’s men have only won two of their last eight games against the Red Devils.

And you may just recall the last time they met at the Etihad Stadium in April: City romped into a 2-0 lead at half-time courtesy of Vincent Kompany and Ilkay Gundogan, and there seemed to be no way back for United.

But whatever Jose Mourinho said in his team talk had the most incredible effect: a brace from Paul Pogba, a rare reminder of his talents, and a goal from Chris Smalling turned the tide and sent the away fans into raptures.

As for Sunday’s clash, the bookmakers have City down as a comfortable 4/11 favourite, but as we’ve seen they don’t tend to have things all their own way in these fixtures.

So is there any value in the 8/1 about Manchester United to beat their city rivals? Let’s take a look at three key battles that will determine how this encounter pans out.

A Case for the Defence

In eleven Premier League games this season, Jose Mourinho’s side have conceded at least one goal in ten of them.

Delve a bit deeper and we note that they have shipped two or more in 50% of those, and that will be a major concern for the Special One ahead of a trip to the country’s most potent attacking force.

City have won six from six on home soil, scoring 24 times and conceding just three. They won’t change their game plan for Sunday’s game, you wouldn’t have thought, with four at the back – including two attacking full backs – and just Fernandinho patrolling from deep in midfield. Otherwise, City will deploy their usual blue arrow formation.

Can United’s defence hold firm? It’s a tall ask, and all of the evidence suggests that the Cityzens will enjoy plenty of attacking success at the Etihad.

A strange situation regarding usual right back Antonio Valencia has seen Ashley Young deployed on the flank, and it’s a set-up that hasn’t really proven to be that fruitful.

Good 3️⃣ points today.
The character and team spirit was spot on!
Thanks to all the @ManUtd fans that came out today you were rocking!
??????? pic.twitter.com/bW4qzziGs3

Valencia has been out having had surgery on his mouth, and while Young is a perfectly serviceable player in his own right – and a World Cup semi-finalist no less – he simply does not offer the necessary defensive security.

So who could face him on Sunday? Well, Guardiola could opt to field Leroy Sane as an out-and-out left winger to run at Young, or he could have the similarly pacey Raheem Sterling on the left with Riyad Mahrez or Bernardo Silva on the right.

Either way, you don’t envy the task facing Young.

Mourinho to Use His Head 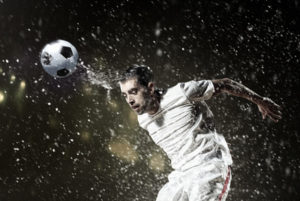 If you go toe-to-toe with Manchester City and try to out-play them, the chances are that you are going to be humbled rather swiftly.

And so seeking out another avenue of success could pay dividends for Mourinho’s troops.

Casting your mind back to April, you may just recall United’s winner in that epic 3-2 battle; a swirling set piece wasn’t defended properly, and Chris Smalling fired home.

Intriguingly, United have scored five goals from set pieces so far this term – nobody has netted more in the top flight, and City have shipped more from set pieces than open play.

Perhaps Guardiola’s side lack aerial dominance? The stats suggest as such, given that they have won fewer duels in the air (just 12.7 per game on average) than any other side. United, on the other hand, win 18.7 on average.

So perhaps the key for Mourinho is to batten down the hatches from open play, try to win as many set pieces as possible, and then lump balls into City’s box with gay abandon.

Taking on board everything we have surmised above, you can easily make a case for the Man City to Win & Both Teams to Score market at 17/10.

We really do like that set piece angle of attack too; we wonder if Jose Mourinho is reading this column?

City tend to lose their aerial duels, and that lends itself to Anytime Goalscorer bets on Marouane Fellaini (8/1), the original set piece nuisance, and Chris Smalling (16/1).

Whatever happens, you sense that we’re in for an absolute cracker!