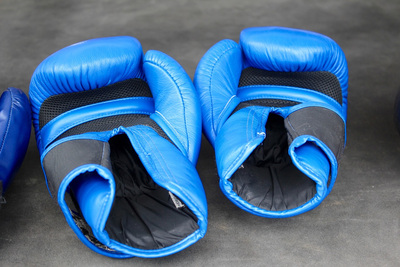 If Tony Bellew’s audacious challenge to become the undisputed cruiserweight champion of the world fails on Saturday night in Manchester, it is likely that ‘Bomber’ will call time on a fantastic career.

The Evertonian speaks with refreshing honesty about the sacrifices he makes prior to each fight, and that he will hang up the gloves when his wife tells him to.

And yet….there’s a glint in Bellew’s eye that suggests he’s not finished with the fight game quite yet.

However, there is the concern that Saturday’s opponent, Oleksandr Usyk, might leave the Scouser with no choice but to retire if he delivers yet another masterclass in cruiserweight boxing.

The Ukrainian won all four belts at the weight with victory in the World Boxing Super Series over Murat Gassiev, the Russian who was, until he encountered Usyk, unbeaten.

The 31-year-old puts all the marbles on the line against Bellew, and so it’s a fight that for both men will prove definitive for the rest of their lives.

When Tony Bellew surprisingly turned his back on the cruiserweight division to pursue a fight with David Haye at heavyweight, the world thought he had gone mad.

The bookies had him down as a 6/1 underdog against the Hayemaker, but that wasn’t the first time that the Bomber had been written off.

He fought – and beat – Nathan Cleverly as an outsider, and he again upset the odds when defeating Ilunga Makabu for the WBC cruiserweight crown.

And so maybe we shouldn’t have been surprised when he knocked out Haye, aided by his opponent’s achilles injury, and we certainly shouldn’t have raised an eyebrow when he dominated he rematch and dispatched the Londoner inside six rounds.

Perhaps we shouldn’t be too hasty to play down his chances against Usyk either?

“I understand why people write me off as he [Usyk] looks so formidable,” Bellew has said. “I have no doubt in my mind that I am going to find a way through him and shock the world again. Against the odds, I just know I can do it.

“He makes mistakes, as we all do. We all have vulnerabilities. I have seen the speed and come across the awkwardness he brings. I have experienced all the things, but he has ever experienced what I am capable of doing.

“He is underestimating me and already asking promoters which heavyweight will he face after this. He is in for a rude awakening. When I hit him for the first time he will feel it.”

In defeating Bellew, Usyk will have proven himself to be the best cruiserweight on the planet by quite some distance.

Where will he go from there? The move up to the heavyweight division, where the real big money lies, is a natural next step.

Usyk, who is intelligent, articulate and enigmatic – a far cry from the trash talking and abrasive glut of heavyweights currently doing the rounds – would be a big draw at top weight, and a potential fight against Anthony Joshua further down the line really does capture the imagination.

He would be a fool to look past Bellew, of course, but given that he is a student of the game it seems unlikely that the Ukrainian will fall into that trap.

Bellew vs Usyk: The Verdict

If there’s one thing we can be sure of, Usyk won’t be overawed by his trip to England to take on home favourite Bellew.

He has beaten Marco Huck in his native Germany, travelled to Latvia to see off Mairis Briedis and outgunned Gassiev in Russia, so he has an impressive CV as an away day fighter.

His gangly reach and awkward southpaw style will pose plenty of problems for Bellew, who was put on the canvas by another leftie in Makabu and who suffered defeat to one of the most dominant southpaws in the business in Adonis Stevenson.

So what chance does Bellew have? Well, he’s an excellent defensive fighter for starters, and packs a punch that will be at least equal to anything that Usyk has tasted before.

The concern for the Evertonian’s camp is that chin of his, which was detonated by both Makabu and Stevenson, who are shorter in stature than the Ukrainian.

Usyk is a different style of fighter to that pair – his punches are concussive, but rarely knockout worthy – and so he is likely to win this contest on points over a gutsy Bellew who may well just be outclassed here.

Usyk via decision, at 8/5 with plenty of bookies, looks a sound proposition to us.

Previous Post: « A History of The Tote: One of Sports Betting’s Oldest Institutions
Next Post: Grand Slam of Darts 2018 Betting Tips: MVG to Prove the Doubters Wrong »