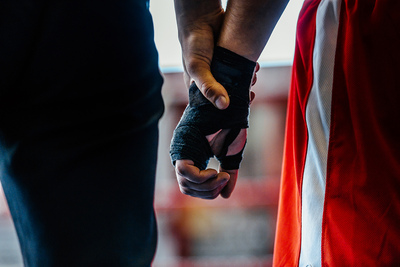 There are only a few sports where the final result is down to the interpretation of others.

In gymnastics’ myriad of disciplines, for example, the scoring panel decide who wins and who doesn’t based on performance, complexity of routines and so on. The same can be said for diving and a few other sports.

But none of those serve up the controversy quite like boxing’s ringside judges, who have a habit of making a complete horror-show of their verdicts.

One such individual, Alejandro Rochin, served up a perfect example at the weekend of why boxing can be the cruellest sport when it comes to declaring a winner.

Tyson Fury, after years of issues including a failed drugs test, mental health problems and ballooning weight, fought his demons to earn a shot at Deontay Wilder’s WBC heavyweight title at the Staples Centre in Los Angeles.

And the Brit produced a superb ‘away’ performance, much like he did when ripping gold from the waist of Wladimir Klitschko a few years ago. Sticking behind his jab and occasionally popping out two and three punch combinations, the Gypsy King had too much in the locker for the powerful but limited Wilder to contend with.

For anybody who’s ever been knocked down in life, that was for you. You can get up too! #andstill lineal heavyweight champion of the world

That’s the good news. The bad is that Fury twice felt Wilder’s lethal power, and twice hit the deck – the latter of which, in the twelfth round, saw him lie prone and unmoving for five of the ten second count, before rising Lazarus-like to see out the remaining two minutes of the contest.

Those knockdown rounds, and arguably one or two others, clearly went to Wilder, but the fight was dominated by Fury and most expected that to be highlighted by the judging panel as the contest was sent to their scorecards.

That meant the fight was called a draw, and afterwards Fury remarked that ‘the world knows who the real WBC champion is’.

Lennox Lewis, the former heavyweight world champion who himself was on the wrong end of a controversial judging decision against Evander Holyfield, said ‘it happened to me and I knew it was going to happen to him’.

“You have to make your fists be the judges,” he said. “Tyson Fury won the fight for me. I think Deontay boxed very poorly.”

“In a rematch, I can only imagine that he will be even better prepared.”

Others, including Floyd Mayweather, Tony Bellew and Carl Froch, also expressed their surprise at the result.

The good news for Fury, if there is any, is that he will bank tens of millions for the inevitable rematch, which will probably happen on UK soil, and should he beat Wilder there the door is ajar for another money-spinning battle with Anthony Joshua, which would be one of the most lucrative in British boxing history.

But boxers are proud men and women, and they don’t want losses or even draws on their CV.

Unfortunately, Fury is not the first to come a cropper at the hands of the judges, and here’s just a flavour of some of the worst points decisions in boxing history.

You know you’ve had an absolute ‘mare with your scoring when it causes the Olympic Games committee to change how the sport is judged.

The 1988 Olympics were hosted by Seoul, South Korea, and locals were delighted when Park Si-Hun fought his way to the gold medal bout in the light heavyweight division.

There he would meet the sublime Roy Jones Jnr, who had blown all of his opponents away without barely breaking a sweat. He was a red-hot favourite to take the gold.

In a move that changed the Olympic Games forever, three of the five judges gave the contest to Si-Hun, who was so embarrassed he raised Jones’ hand on the podium afterwards.

Two of the judges were banned from boxing for life, and this is one of the few times when judging incompetence allegedly crossed the line to downright corruption.

A bout billed as the ‘Perfect Storm’ showed that when the judges are allowed to make the big calls, it sometimes never rains but it pours.

Manny Pacquiao was the reigning WBO welterweight champion, with Bradley stepping up in weight to challenge at the MGM Grand in Las Vegas.

The champion delivered a masterclass, out-landing the challenger in 10 of the 12 rounds, but was unable to land the knockout blow to complete the perfect performance.

There wasn’t any doubt who would win on points….was there? Two of the three judges, almost unbelievably, had Bradley as their winner by 115-113, and that was enough for him to rip the gold from Pacquaio’s waist.

The crowd made their voices heard, and Bradley himself said he’s ‘have to watch the tape’ before making any comment. Tellingly, 50 of the 53 journalists at ringside judged the fight in Pacquaio’s favour, and after an independent review by the WBO the five new judges all had the Filipino down as their winner.

Unfortunately, the damage had already been done….

This was being billed as one of the most exciting heavyweight bouts of all-time, with both men looking to unify the division.

In front of a packed Madison Square Garden, the reality was rather less interesting. Lewis produced a fantastic defensive performance, jabbing at will and evading almost everything Holyfield through at him.

By the end, Lewis had landed almost as many punches as Holyfield had thrown.

The problem, perhaps, was that Lewis was a Brit who held a Canadian passport, fighting an American hero on home soil….and the judging suggested as much.

The contest ended in a controversial draw, with Eugenia Williams – who later apologised for her performance – scoring it 115-113 in Holyfield’s favour.

While boxing is a sport of interpretation, there are plenty of stats that enable the judges to make their decisions more accurately.

Numbers like punches thrown/landed are a good guide for how a fight has gone, even if most prefer to use the naked eye as their yardstick.

The stats suggest that Felix Sturm was absolutely robbed of his WBO middleweight belt against the legendary De la Hoya, who by now was in the winter of his career.

The older man was the busier, throwing 792 punches to Sturm’s 541, but with a success rate of just 24% – compared to his opponent’s 43% – the stats suggest he was wayward and lacking the precision of the champion.

Cynics would suggest the decision came to protect the proposed super-fight between De la Hoya and Bernard Hopkins, which was already in advanced negotiations prior to the Sturm bout. “There’s $10 million waiting for me if I win and De La Hoya wins,” Hopkins said prior to his fight earlier on the night. “All of this on the line and all it would take is one shot.”

HBO’s judging team had Sturm winning comfortably, and the German himself said: “I know Oscar is a big name here and a great champion. But tonight, I think the whole world saw who was the better fighter.”

When Sports Illustrated, one of America’s most prominent publications, serves up a headline of ‘Robbed’ emblazoned above your photo, you know you can feel hard done by.

And that’s exactly what happened following Pernell Whitaker, the WBC welterweight champion, took on Julio Cesar Chavez in Texas back in 1993.

Chavez was your classic Mexican: a classy operator who could box your head off or trade blows as you wished. Cheered on by a sizeable following on the southern border, he was expected to make light work of the talented Whitaker.

But the champion didn’t take a backward step, and in the middle rounds began to really assert his authority on a shell-shocked Chavez.

The fight almost became a procession in the latter stages, and with the ‘home’ crowd silenced there was even some surprise when the first scorecard was read out and Whitaker had only won 115-113.

But what followed next beggared belief. The other two judges somehow made it 115-115, meaning that the official verdict was a draw.

Whitaker retained his belt, but that was little consolation for a man who had just outboxed one of the pound-for-pound best on the planet.

Previous Post: « Luca Cumani: A look Back on the Legendary Horse Racing Trainer’s Career after His Retirement
Next Post: Match Fixing in Sport: How Deep Does it Go and Should Punters be Concerned? »