When it comes to training winners at the Cheltenham Festival, few know the game as inside and out as Willie Mullins does.

The genial Irishman has bagged 61 winners at the Festival – one more than nearest rival Nicky Henderson in the all-time leader rankings – and will be expecting plenty more in 2019 too.

Mind you, his monopoly on the Prestbury Park extravaganza is over. Gordon Elliott has bagged the leading trainer prize at the meeting for the past two years, and so Mullins – privately, you suspect – fells he has a little something to prove. He would love nothing more than to get one over on his fellow Irishman by regaining top spot and winning some of the feature races too.

As is customary at this time of the year, Mullins opened his stable doors to the press to offer a tour of his yard and to offer a few pointers on who his likeliest candidates for success at Cheltenham will be.

He spoke in depth to the Racing Post about his team, and admitted it would not be his strongest that he had taken to the English market town.

But, as we’ve come to expect, Mullins often has a trick up his sleeve, and punters should not be surprised if his charges spend plenty of time in the winners’ circle in March.

Here’s the lowdown from the man himself on his Cheltenham Festival entries for 2019.

Assessing his ‘squad’, Mullins said: “We have a nice spread across all the races, from the Gold Cup to the Champion Hurdle. The novice hurdlers are not too bad, we look to have a good hand in the Mares’ Hurdle and we have chances in both the Bumper and the Juvenile Hurdle.” 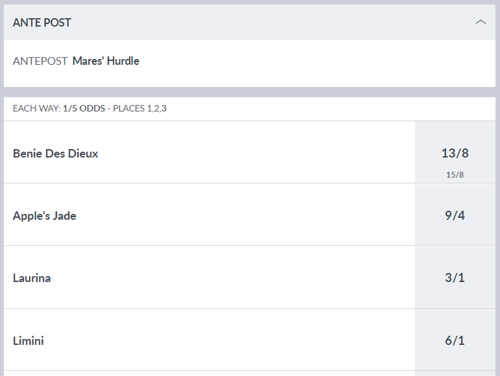 Of that Mares’ Hurdle, Mullins confirmed what the betting market had already hinted at: that Benie Des Dieux is his standout horse for 2019. “She’s our best chance going over. We haven’t had a chance to run her this year because we haven’t had the ground suitable. I really didn’t want to run her unless we got winter ground, and each time a race came up that was suitable for her the ground wasn’t good and so I left her.”

The equine flu outbreak also cost his starlet an outing – she had to have the booster jab as prescribed by the BHA, and couldn’t make her proposed race date. “Things haven’t been going her way, but hopefully they do when we get across the Channel,” Mullins added.

The trainer confirmed that she had been looking well in her work on home soil, and that will surely whet the appetite of punters as she heads off to win back-to-back Mares’ Hurdle titles on Tuesday March 12.

Her two main competitors would surely be Apple’s Jade and Laurina, who both crucially also hold Champion Hurdle entries.

Apple’s Jade, if she was sent into battle for the Mares’ Hurdle, would bring Mullins and Elliott together in a fantastic battle, but her trainer has already confirmed she will go to ground in the Champion Hurdle. “She’s come out of her last run very well. She’ll have two more little bits of work and then it will be all systems go for the Champion Hurdle,” Elliott has said this week.

The latter is also from the Mullins yard, so he could have a supreme two-hander in the card, although Laurina’s performance in winning the Quevega Hurdle suggests she also has a genuine tilt at honours in the Champion Hurdle.

“Laurina could be anything,” he said. “We’ll find out sooner or later! She’s very good at home, but hasn’t met the boys in opposition and that’s just the way things have worked out. I would prefer winter ground for her, however I have brought horses to Cheltenham before who have gotten up the hill. A good horse is a good horse.”

If both are pointed elsewhere, the coast is clear for Benie Des Dieux to demolish the opposition in the Mares’ Hurdle if that wetter weather comes.

It is one of those rare, almost inexplicable facts that govern sport as a whole, let alone National Hunt racing: Willie Mullins has never trained a Gold Cup winner.

Bizarre but true, and he will be looking to end that hoodoo in 2019 with one of four handy entries. 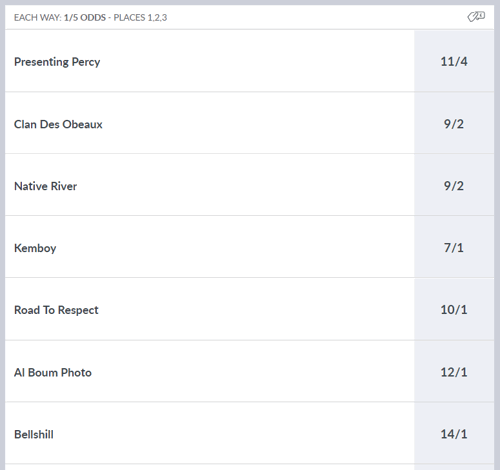 Bellshill, Kemboy, Al Boum Photo and Invitation Only all appear to have genuine chances, although Mullins himself is sweet on two in particular.

“Both Kemboy and Bellshill won at the Leopardstown Festival at Christmas, while Al Boum Photo and Invitation Only might need another year more to mature,” the Irishman said.

“But the top two have everything going for them. They’ve had great preparations, everything has gone right, so they give us a good chance in what could be a very open Gold Cup this year.”

Mullins sees the Gold Cup as being very open, and the bookmakers largely agree. Waiting patiently is the 7/2 ante post favourite, although his success will surely be governed mostly by the conditions. Clan Des Obeaux, the brilliant King George and Denman Chase winner, is in red hot form while Native River, the defending champion, cannot be written off.

On his stable tour, Mullins was asked about the health and fitness of Min and Footpad, two fantastic chasers who have options at the Festival.

“Both are fine. Min seems in great order, and Footpad I schooled the other day without any hind shoes as he’s injured himself this year with two over-reaches, so I’m not sure if he’ll have hind shoes on the day or not.

“I was very happy how he [Footpad] schooled the other day, and he looked like he was back to his old self”

“We’ll try and keep the two of them apart, I’m not sure which horse will run where but we’ll see.

Neither horse will have the easiest of tasks either way, with Altior set to go off as an odds-on favourite in the Champion Chase and Cyrname, who remarkably was given a higher number than Altior in this week’s re-jigged ratings, awaits the horse who enters the Ryanair Chase.