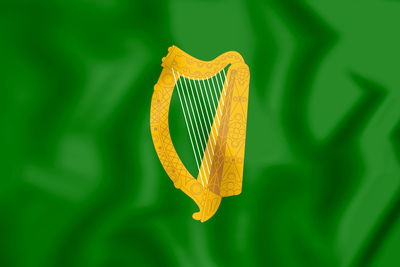 It may only be in its second year, but the Dublin Racing Festival has proven to be a fantastic addition to the National Hunt calendar already.

Horses of all shapes and sizes descended on Leopardstown for the two-day meeting, which produced a selection of stunning finishes and notable winners with the Cheltenham Festival just five weeks away.

Indeed, eight winners at the Prestbury Park meeting last year had run at the Dublin Racing Festival just prior, so perhaps it will go on to become a fantastic waypoint for the Cheltenham meeting in March once again.

Here are four to follow after their exploits at Leopardstown at the weekend.

Elite horses going to war and cheered home in a razor-wire tight finish by a raucous crowd; that’s the formula that works for the Cheltenham Festival each and every year.

And punters at Leopardstown enjoyed a fascinating dress rehearsal in the Irish version of the Gold Cup on Sunday.

In a field reduced to just four due to the fast going, the bookies’ favourite Road to Respect was edged out in a titanic collision with Bellshill.

The favourite looked the stronger horse after almighty leap over the last, but Ruby Walsh – as has been his trademark over the years – timed Bellshill’s finishing rally to perfection to give the crowd the home winner they craved.

“Our fellow was great. He jumped brilliant and Ruby was great on him,” said Bellshill’s trainer Willie Mullins. “We’re very keen to take him to Cheltenham, he needed the run badly at Christmas.”

And for punters seeking guidance for their Cheltenham Gold Cup ante post picks, Walsh himself gave the best indication yet that Bellshill could be the one to catch. “I don’t think either of us [Walsh or Sean Flanagan on Road to Respect] had a ton up our sleeve away from two out, we were both stretching and they were always going to quicken a little bit, and it was who would stay best. That’s what an honest horserace is,” he said.

“He can build on that and go forward now. He’s a bit older, a bit stronger, and he showed today he really stays.”

There are many who think Bellshill’s best work will come on quicker ground – his other major win, the Punchestown Gold Cup in 2018, was contested at a fair old lick – and so weather-watchers will have the nine-year-old on red alert should we enjoy a mild and dry early spring.

He’s into 10s with some sportsbooks for the Gold Cup in the ante post market, with a best price of 14/1 available, and that certainly looks value….weather permitting, of course. 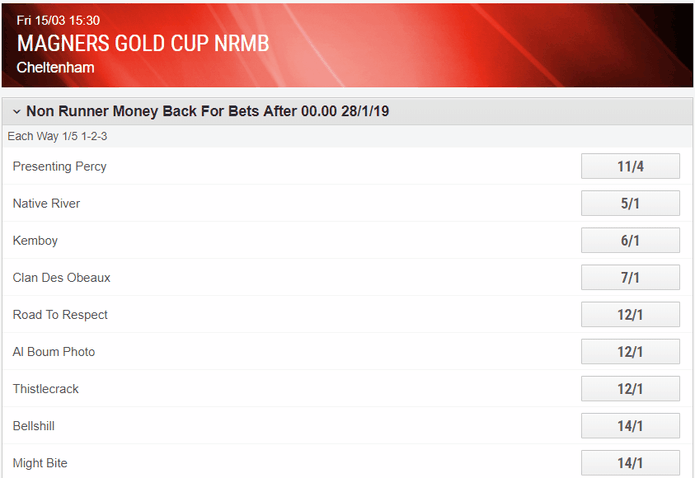 As for Road to Respect, there has been no great write-off by the market, with the Gigginstown horse still available at 12/1 after another decent showing in rapid conditions.

Apple’s Jade Set to Leave the Ladies Behind

Many had expected Apple’s Jade, the fantastic filly, to be pointed towards a second Mares’ Hurdle victory at the Festival.

But Michael O’Leary dropped the strongest hint yet that she will instead run in the Champion Hurdle after an outstanding win in the Irish version of the race at the weekend.

The seven-year-old dominated a decent field which included Supasundae and Melon to land a fourth consecutive victory, while serving up the biggest hint that she’s ready to step up to take on the big boys.

“The situation is, we were genuinely surprised by how well she ran yesterday,” O’Leary said on Sunday.

“I thought she’d be beaten by Melon – coming back to two miles on ground that was too fast for her given she stays three miles – but she was so good you’d have to look at the Champion Hurdle on the back of that.

“We won’t make a decision until Cheltenham week and we’ll see how she is, how everyone else is and what else we have going, but if she is all right and the ground is okay, it’s probably 75-25 she’d run in the Champion Hurdle.”

Buveur D’Air, another primed for Champion Hurdle glory, is one of the premier two-milers around, and as a two-time festival winner would surely start as favourite if some rain comes in the lead up to the Cheltenham Festival 2019.

But he is known to favour softer ground, and given Apple’s Jade’s incredible turn of speed over 16f on Saturday, quicker conditions could set up a phenomenal dual that could be the toast of the meeting. 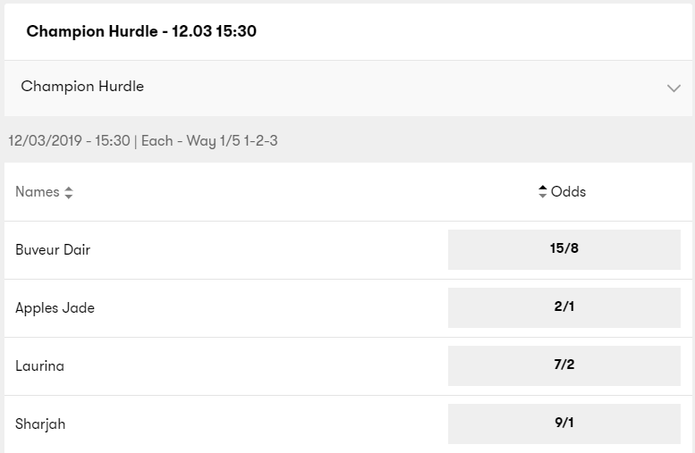 At the time of writing, Buveur D’Air held ante post favouritism – just – at 2/1, with Apple’s Jade at 9/4. Her price for the Mares’ Hurdle has gone out to 5/2 in some sections after being an even money chance just a week ago.

Douvan, Un De Sceaux, Footpad….there’s just three modern-day horses that have won the Irish Arkle and followed up by taking the race of the same name at the Cheltenham Festival.

Le Richebourg will be looking to join that exclusive club after another impressive showing at the weekend.

JP McManus’ six-year-old led home stablemate Us And Them to add another Grade One triumph to his collection, and all roads now lead to Prestbury Park for this exceptional young chaser.

That was a fourth win in five starts, and follows hot on the heels of another excellent run in the Racing Post Novice Chase at Leopardstown back on Boxing Day.

“Le Richebourg is a very quick and accurate jumper,” said Joseph O’Brien. “He’s learning all the time and the strong pace suited him. The Arkle at Cheltenham is the plan – they’ll probably go even quicker there.”

Into 9/2 in the ante post market, the bay speedster could take some stopping.

Incredibly, there had never been a British winner at the Dublin Irish Festival partway through it second edition, but a steeplechaser with bags of potential brought that run to an almighty end in the Flogas Novice Chase.

La Bague Au Roi, the Warren Greatrex bay, did all the running in Sunday’s 21f jaunt, and was rarely tested in what was a second consecutive Grade One win.

That followed a triumph in the Kauto Star Novices’ Chase on Boxing Day, where she left the likes of Santini trialling in her wake.

Setting a fair pace at Leopardstown, the eight-year-old jumped cleanly throughout and finished in a manner which suggested there was plenty left in the tank.

Preferring a firmer ‘flat track’ according to jockey Richard Johnson, it had been suggested that La Bague Au Roi would skip the Cheltenham Festival for a run at Aintree a few weeks later.

It’s a theory backed by Greatrex, who has said that “she will probably have entries for Cheltenham, but she is more likely to head to Aintree as I think she is better on a flat track.”

But after her heroics at Leopardstown, could there be an about-turn as La Bague Au Roi looks to make it third time lucky at Cheltenham?

Previous Post: « Celebrity Racehorse Owners: Famous Stars of the Stage, Screen and Stable
Next Post: Getting Shirty: How British Football Fans Continue to Get in Bother Abroad »