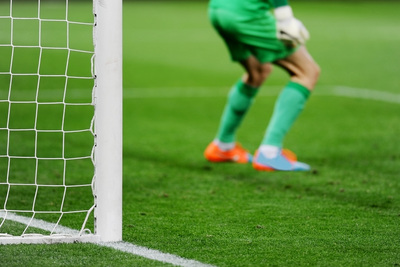 It was the sort of scene you wouldn’t expect to see in a Sunday League match between the Dog & Duck vs the Red Lion, let alone a showpiece cup final at Wembley Stadium.

But that’s exactly what happened in the Carabao Cup final when Kepa Arrizabalaga, the Chelsea goalkeeper, refused to be substituted by his manager Maurizio Sarri despite twice requiring treatment for cramp or a muscle injury.

Sarri, furious by the dissent in his ranks, appeared to almost storm off down the tunnel at one point during the row and also had to be held back by Antonio Rudiger as the sides prepared for the penalty shootout, which opponents Manchester City would go on to win.

Kepa could do nothing about the penalties that City scored, and he even appeared to be injured as he stretched his muscles in-between spot kicks.

There was furore from pundits across the media spectrum, with many suggesting that such insubordination wouldn’t have been accepted in ‘their day’.

Perhaps they are right given the lightweight nature of the Spaniard’s punishment – he was fined £200,000 (he earns £10m a year, by the way) and presumably was forced into making a public apology.

It will be interesting to see how Chelsea move on from this, and whether Kepa features in their starting eleven from here until the end of the season. If he does, it’s another worrying sign that player power is continuing to infiltrate the game.

It truly was a remarkable spectacle: Sarri and his assistant Gianfranco Zola waving frantically at their goalkeeper to leave the field, while Kepa stood with outstretched arms and protested that he was fine to continue.

The troubling aspect is that Sarri may have wanted to make the substitution for tactical reasons: Willy Caballero, the reserve keeper, is a former Manchester City player with a reputation for being a supreme penalty stopper, and the inference is that he might have had some insight into which corners the City players might fire their shots into.

Still, there was nothing the manager could do to remove Arrizabalaga from the field…or was there?

Incredibly, Law 3 as outlined by the International Football Association Board (IFAB), decrees that:

‘if a player refuses to leave the field after being substituted, play must continue’.

And so the individual in question is able to continue as they wish, and the only realistic way they can be removed from the field is physically – again, it’s worth remembering that you can be booked or sent off for violent conduct on a teammate as well as an opponent.

Hopefully, Kepa’s actions won’t spark a trend of players refusing to leave the field when their number is held aloft by the fourth official.

Coming as it did in a Wembley cup final, Kepa’s behaviour became a global news sensation.

But there have been plenty of other examples of players – some megastars – that have refused to have been substituted, but because they haven’t done so in front of a TV audience of millions they have generally been swept under the carpet.

Nobody can doubt the God-given gifts of Lionel Messi and Cristiano Ronaldo on the football pitch, and their humanitarian work off the field should also be reported.

But both have shown a propensity to be something of a prat in the past.

In a La Liga game against Eibar back in October 2014, Barcelona boss Luis Enrique attempted to substitute Messi in order to give the Argentine a rest given that the Catalan giants had romped into a 3-0 lead.

But the diminutive frontman replied by simply sticking his thumbs up at his manager to signal that he wanted to continue.

A visibly frustrated Enrique stood down and instead removed Neymar from the action, commenting after the game that “I have to take everything into account, but I trust in how he [Messi] feels and what he tells me.”

Like Sarri, the Barca legend had no choice but to eat humble pie in the wake of his player’s egomaniacal actions.

It’s not the first time that Messi has been guilty of causing discontent in a dressing room, with stories that at World Cup 2018 he ended up picking the Argentina starting line-up instead of coach Jorge Sampaoli.

Whether there was any truth in that remains to be seen, but a shocking expose in The Independent revealed just how deep tensions in the camp ran; not aided by their talismanic attacker.

Messi’s long-term nemesis, Cristiano Ronaldo, is also no stranger to pulling the strings…no matter what his manager orders him to do.

Incredibly, CR7 once defied the orders of the legendary Zinedine Zidane as he looked to substitute his forward for some fresh legs in a Champions League tie with Bayern Munich in 2016/17.

Seeing the number seven appear on the fourth official’s board, Ronaldo shook his head and wagged his finger at Zidane in a shocking act of unprofessionalism.

Surprisingly, ZZ – not known for being the shy and retiring type – acquiesced to his star man, instead taking off Karim Benzema to allow Marco Asensio to enter the fray.

And what a choice it was, whether by accident or design. Ronaldo scored once and Asensio bagged a brace as the Galacticos overturned the Germans’ lead in extra time.

It must be an ego thing that gives players the sense of self-importance to wilfully disobey their manager’s instructions. Messi, Ronaldo and Zlatan Ibrahimovic are all guilty of ‘pulling a Kepa’.

As is customary for the man, Zlatan scored a remarkable goal for AC Milan in their game against Fiorentina back in November 2010; an audacious bicycle kick that flew into the top corner of the net.

As he celebrated his moment of magic the giant Swede somehow managed to hurt his arm, but as manager Max Allegri tried frantically to substitute his striker were rebuffed by the classic Zlatan stare.

Whether you’re a global superstar or not, there is a distasteful arrogance to refusing to be substituted. Let’s hope that Kepa – hardly on the level of a Messi or a Ronaldo – finds that out the hard way.