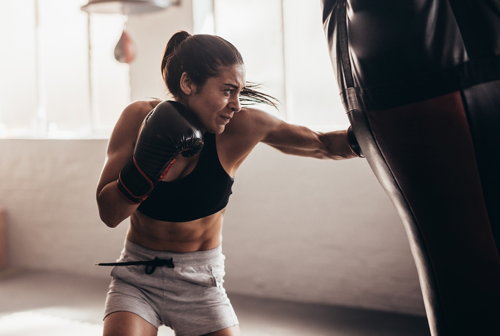 You sense it could be a landmark night for women’s boxing.

The middleweight division will be unified for the first time on Saturday when Claressa Shields puts her WBC, WBA and IBF belts on the line against the WBO strap-holder Christina Hammer.

Both are unbeaten so far, hence the excitement, and Shields firmly believes this bout will confirm her status as the greatest female fighter ever.

“Victory will show that I am the greatest woman of all time,” she said.

“I am not just saying it to be super cocky – to be the greatest you have to do great things.”

The American has achieved plenty already, as it goes, having won back-to-back gold medals at the Olympic Games of London 2012 and Rio 2016, and in just nine professional fights she stands on the brink of greatness….not bad for a 24-year-old.

Hammer has been rather more circumspect in the build-up, and has refused to be drawn into a war of words with Shields.

“This feels great and is a great opportunity to show the world great female boxing, and that women can be strong, athletic. It will be the game changer of women’s boxing,” she said.

The scale of the event, which will be held at the Boardwalk Hall in Atlantic City, confirms that women’s boxing is very much on an upward trajectory, and that any past preconceptions about the sport have been brushed aside given the likely attendance figures. “This is the biggest fight in women’s boxing history. It feels very big today and I’m sure in a month, a day or a year after this fight we will know that it was a historic event,” said the promoter, Dmitriy Salita.

One of these women will earn themselves a spot in boxing’s hall of fame, that’s for sure, but where do Shields and Hammer stack up against the greatest female boxers that have ever lived?

Her father was often dubbed ‘the Greatest’, both by himself and boxing’s expert pundits, and so perhaps it’s no surprise that Laila Ali enjoyed an incredible career in the ring too.

The daughter of Muhammad Ali unified the middleweight division, and she was part of the first ever main event PPV for women’s boxing, in which she defeated Jacqui Frazier-Lyde, the daughter of Joe Frazier with whom Ali enjoyed a ferocious rivalry. It was a true Rocky story.

Laila ended her career with a perfect 24-0-0 record, and with more belts than Donatella Versace. She regularly featured on the undercard of huge cards featuring the likes of Mike Tyson, and her trailblazing for women’s boxing is still felt around the world today.

She floated like a butterfly and stung like a bee, and if Ali was boxing today she would have finally reaped the financial rewards for her efforts.

Widely regarded as the hardest hitting female to ever take to the sport, Wolfe was a three-weight world champion who only suffered a single defeat in her 26-fight career.

‘Brown Sugar’ picked up straps in the light middleweight, middleweight and light heavyweight categories, and avenged her only loss to legendary scrapper Valerie Mahfood to ensure she ended her career with no regrets.

Wolfe continues to blaze a trail, working as an actress in Hollywood movies such as Wonder Woman while training the next generation of fighters, including middleweight contender James Kirkland. 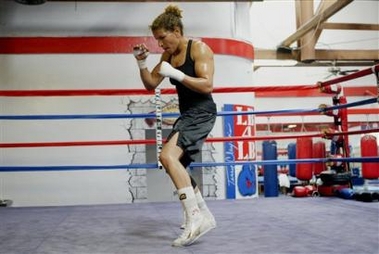 Boxing promoters love to hang a nickname or moniker on their fighters – usually woefully misplaced, but by budding Lucia Rijker ‘the most dangerous woman on the planet’ they arguably weren’t far from the mark.

The Dutch Destroyer enjoyed a glittering career in kickboxing before lacing up her gloves, and from there she compiled the perfect 17-0-0 record with 14 knockouts.

That led her to world titles in both the super lightweight and junior welterweight divisions, but a lack of worthy opposition – this was in the 1990s, prior to the boom in women’s boxing – meant that Rijker’s career was arguably cut short too soon.

While Shields vs Hammer is potentially the biggest fight in the sport’s history, Rijker could have laid claim to that accolade but for injury.

Legendary promoter Bob Arum arranged the ‘Million Dollar Lady’ contest, which would have seen the Dutchwoman take on Christy Martin at Mandalay Bay, Las Vegas. Both fighters were guaranteed a minimum purse of $250,000, with a further $750,000 to the winner.

But Rijker ruptured her Achilles tendon in training, and the fight was scrapped. Sadly, she never got to have that career-defining match.

The Norwegian has achieved a distinction in boxing that only five fighters – male or female – have achieved. Alongside Bernard Hopkins, Jermain Taylor, Terence Crawford and Oleksandr Usyk, Braekhus holds all the alphabet titles, namely WBO, WBA, WBC, IBF and IBO, simultaneously. She was also the first female undisputed champion in any weight category.

It’s an unbelievable achievement, and shows just how far the 37-year-old is ahead of the rest of the middleweight division.

Braekhus is still active too, with her last fight coming in December 2018, where she defeated Aleksandra Lopes on points in California’s StubHub Center. That extended her undefeated streak to 35-0-0.

It’s always a risk adding an active fighter to a list of the best in history, as we know that history has a habit of coming back to bite you on the behind.

But Katie Taylor has left a lasting legacy in the UK and Ireland no matter how the rest of her career pans out.

Mind you, things are going pretty well for the 32-year-old, who in March 2019 unified the lightweight division with a knockout win over Rose Volante. That was just her thirteenth professional fight.

Taylor was a prominent amateur who won five gold medals at the World Championship, but arguably the best day of her career came when she carried the flag for the Republic of Ireland at the opening ceremony of the 2010 London Olympics, where she would also go on to win gold.

Widely regarded as the best pound-for-pound women’s fighter on the planet, Taylor’s place in boxing folklore is assured; even though, you suspect, there’s plenty more to come from her.

Previous Post: « The Greatest Comebacks in Sporting History: From Tara Moore to the New England Patriots
Next Post: Sporting Greats Who Return to the Top: Tiger Woods Joins Ali, Lauda and Federer with an Incredible Career Comeback »