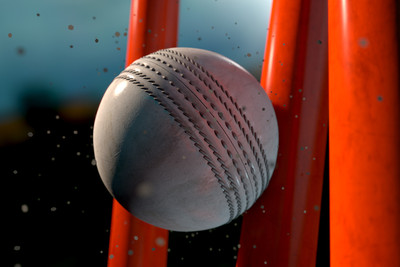 England are the favourites to win the 2019 World Cup.

Those are not words you get to hear every day, but they are well deserved for an English cricket side that has worked extremely hard to be ranked the best limited overs team in the world.

And as hosts, England have an almighty advantage in this Cricket World Cup, which gets underway on May 30 and runs all the way through until the final at Lords on July 14.

Eoin Morgan’s men will have to come through the regular league phase, the Super Sixes and then the knockout rounds to finally get their hands on the trophy, with this current class looking to become the first English outfit to win cricket’s version of the World Cup.

They will come up against a high quality India side, plus the likes of Australia, South Africa and New Zealand who are more than capable on their day. 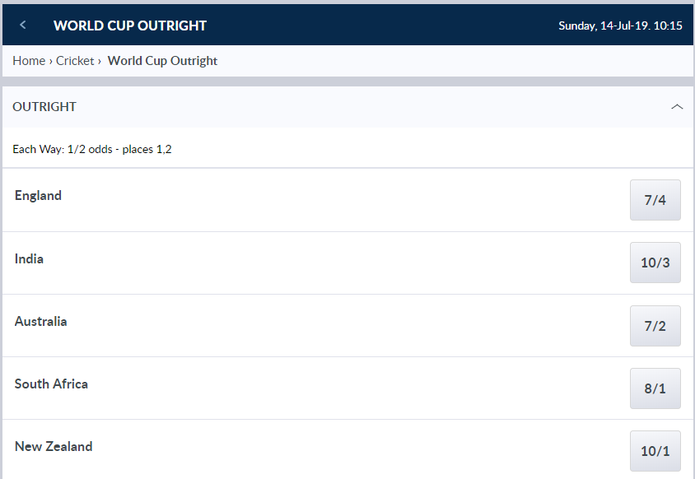 But on the face of it, this is one England team that surely won’t let supporters down at the business end of the tournament. At least they won’t be getting beaten by Germany in the knockout phase, anyway!

Whether England lift the trophy or not, we’re surely in for an outstanding tournament both to watch and bet on, while neutral observers should get to enjoy some tremendous matches that go right down to the wire.

Let’s hope this year’s edition serves up some crackers like these, arguably the five best Cricket World Cup matches in history.

Games between these old enemies always get the blood pumping, so when they faced off in the 1987 World Cup final we were entitled to feel excited about what was to come.

And the two teams produced a spectacle to savour, with the Aussies posting 253-5 from their 50 overs at Eden Gardens in Calcutta.

It was the sort of total that was both highly competitive and eminently gettable, and England set about their task in derisory fashion with opener Tim Robinson dismissed after just two balls.

Graham Gooch, as he so often did, steadied the ship, and Bill Athey’s composed half-century got England right back into the contest.

Mike Gatting looked to be carrying England to victory, but in the heat of battle he made the strangest decision: playing the reverse sweep, a shot rarely seen prior to the Millennium, off Alan Border and plopping a simple catch up to an Aussie fielder.

Up against it – the moment England handed Australia the 1987 title? Should Mike Gatting's misjudged reverse-sweep make it to the next round of @bira91's @cricketworldcup Greatest Moments? pic.twitter.com/MheIYCV0hx 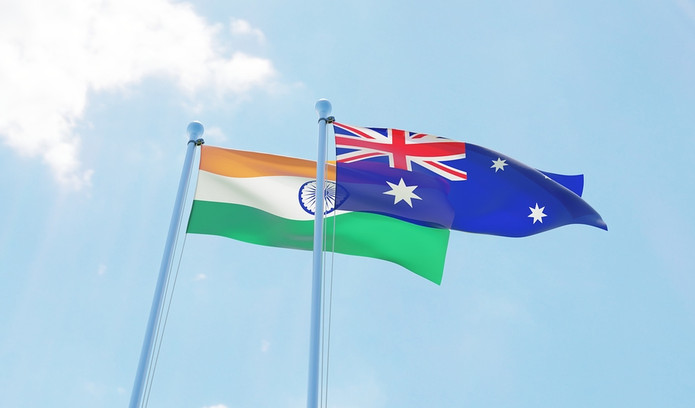 While more drama was to come for Australia in this tournament (see #5 above), their group match with India was hardly a quiet night in at the library.

The result could have been so different had Ravi Shastri not owned up to a ball that Dean Jones had hit for six – which the Indian had claimed had bounced before the rope.

If Australia’s total of 268 had stood then the game would have been tied, but Shastri did the decent thing in the break between innings and admitted the ball had gone for six; the Aussies’ score was bumped up to 270.

Guess what: India were bowled out for 269 when Maninder Singh was dismissed as he looked to hit the winning runs.

England had a habit of fowling up their attempts to win the World Cup, and once again in 1992 their poultry efforts were derailed by a Zimbabwean chicken farmer.

Eddo Brandes worked on a farm by day and played a bit of cricket at the weekends, and his abilities were such that he was called up minnows Zimbabwe for their final squad.

But even he surely could not have believed what followed, as his gentle swing bowling accounted for four wickets as England tumbled to defeat despite chasing a lowly 134.

One of the most talented English batting line-ups ever was ripped to shreds by a man more widely known for giblets than wickets.

For possibly the best Cricket World Cup match in history, you have to go all the way back to the inaugural hosting of the event in 1975, when the West Indies and Australia – the two best teams on the planet at the time – contested the final.

The Windies batted first and were indebted to a swashbuckling century from their captain, Clive Lloyd, as they posted 291-8 from their 60 overs.

The Aussies, as brash and as confident as ever, fancied the run chase, but they hadn’t catered for the bullet-like throwing arm of Viv Richards. The big-hitter had suffered a rare failure with the bat, but he ensured he impacted the final by running out three of Australia’s top four batsmen, and by the time they were reduced to 231-9 the game looked all but over as a contest.

But step forward Jeff Thomson and Dennis Lillee, known principally for their rapid, fiery pace bowling, who put together a run-a-ball partnership to haul their side to within 17 runs of the Windies with two overs remaining.

In the end, the pressure told and Thomson was run out to spark jubilant scenes on the terraces at Lord’s. The ground was jam-packed with West Indians from around London, and the mass pitch invasion was confirmation – if any were needed – that the Windies love their cricket and, principally, they love winning.

It may not have been the best game of cricket from a technical standpoint, but this semi-final must surely go down as one of the most edge-of-the-seat sporting spectacles in history.

With just one win separating them from a place in the World Cup final, South Africa won the toss and chose to field first.

And they made serious inroads into the Australia batting line up, with a hostile spell from Alan Donald and the miserly Shaun Pollock combining to reduce the Aussies to 68-4.

The batting side rallied courtesy of half-centuries from Steve Waugh and Michael Bevan, but Donald and Pollock returned to the attack and shared nine wickets between them as the Aussies were bowled for a well below-par 213.

South Africa were 48-0 in reply and going nicely, but the introduction of Shane Warne into the attack, as was often the case, changed the game.

The leg-spinner removed Gibbs, Kirsten and Cronje in quick order, and while the South African middle-order rallied the game was perfectly poised with them at 183-7 with five overs to go.

What followed was drama of the highest order, as the Saffers needed nine runs from the final over with just one wicket to play for.

The Aussies were favourites to win then, that is until Lance Klusener blasted the first two balls of the over to the boundary.

With one run needed and four balls to get it, South Africa were home and hosed….weren’t they?

Not quite, and nerves were frayed when Klusener and Donald were involved in an almost calamitous run out off the third ball.

That was the dress rehearsal for what was to come from the fourth ball. Klusener pumped the ball into the outfield and set up for what would have been the winning run.

But Donald stayed put at the non-striker’s end, and an almighty farce ensued.

In the end, both South African batsmen ended up at the same end, as Damien leming rolled the ball underarm to Adam Glchrist, who whipped off the bails to complete the run-out.

The game ended in a tie, but Australia progressed to the final on account of finishing higher in the league phase of the competition. It’s a ‘defeat’ that South Africa have not lived down to this day.

Previous Post: « Premier League Club’s Financial State of Play 2017/18: How is Your Team Performing Off the Pitch?
Next Post: James Graham’s Broken Leg and The Worst Injuries That Sports Stars Have Played On With »