It’s been a long time since being a Newcastle United fan has been a joyful experience.

The gloomy atmosphere in the North East has – coincidentally or not – occurred almost simultaneously with the time that Mike Ashley has controlled the purse-strings at the club.

Since the businessman took over the club prior to the 2007/08, they have finished inside the Premier League’s top eight on just one occasion, with two relegations and a pair of tenth place finishes the best the Magpies have mustered.

The architect of their over-achievement lately has been Rafa Benitez, who has since left the club after Ashley failed to tie the Spaniard down to a lucrative long-term deal despite being treated as a demi-god by the fans – once again, the owner’s unwillingness to open up his chequebook has proven costly.

And what about those fans, of whom 51,000 on average piled into St James’s Park on a weekly basis. That’s just 2,000 less than Liverpool, some 10,000 more than Chelsea and considerably more than the likes of Everton and Leicester City. When they say Newcastle United is a big club, that’s exactly what they mean.

But with a underwhelming new manager, and rumours that Ashley’s financial empire isn’t built on as solid ground as it might seem, is it any wonder that there has been a surge in the amount of bets on Newcastle United to be relegated from the Premier League in 2019/20, more than any other club. 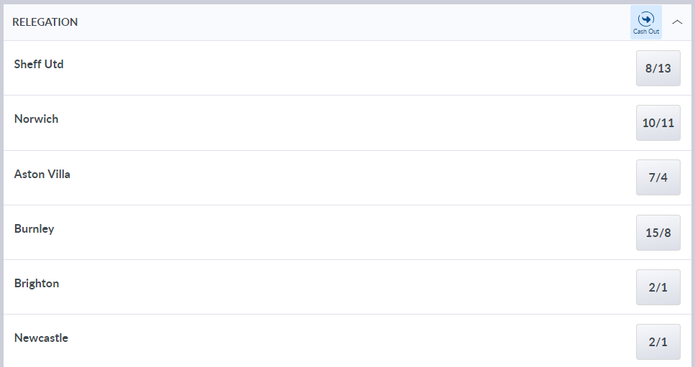 Is there any hope for the Magpies?

No Welcome Mat for Bruce’s Homecoming

Benítez’s successor will be Steve Bruce, a man without about as much loyalty as Ryan Giggs on heat. Here’s a bloke that has managed Birmingham City and Aston Villa, Sheffield United and Wednesday, and now Sunderland, Hull City and Newcastle United. He left the Owls after a couple of months in charge, despite the club allowing him a lengthy compassionate leave and offering him a way back into the game.

As a Geordie, you would have thought Bruce would have been welcomed with open arms to the club, but an uninspiring managerial record – and with memories of that to-year tenure at Sunderland still fresh in the mind – means that the former Manchester United defender has been cast as something of a pariah already.

In over 20 years of management Bruce is still to win a trophy, and his best achievements have come in guiding teams to success in the Championship – that does not bode well.

He got sacked by the Black Cats after winning less than one-in-three games while in charge, took Hull City up….and then down again, and has walked away from numerous jobs when the chips were down.

But it’s not all doom-and-gloom, having kept Wigan and Birmingham City up when few gave them a real chance of survival.

The question right now is where are Newcastle United at? Having finished thirteenth last term, shouldn’t they be looking to kick on and finish in the top half of the Premier League?

Perhaps, but that would hinge on Bruce delivering the best work of his managerial career, and Mike Ashley supporting him in the transfer market to revitalise what is a pretty ordinary squad of players.

You sense that Mike Ashley is the kind of chap who likes to keep his band statements close to hand.

And so the latest financial forecasting for his firm Sports Direct might just be keeping him up at night – and that might have implications for the amount of cash Bruce is given to spend on new recruits.

Ashley himself has called trading conditions ‘unbelievably bad’, and with poor forecast results for his brand House of Fraser the share price of Sports Direct has also taken a battering – at one point down 15% to a seven-year low at the end of last week.

The British Retail Consortium has also intimated that high street conditions in the UK will continue to worsen amid Brexit uncertainty, which again will have a knock-on effect for Ashley’s Sports Direct concern.

He has a huge high street empire, which also includes House of Fraser, Evans Cycles and Agent Provocateur.

Regardless of all those issues, Sky Sports is reporting that Ashley will hand Bruce a £90m war chest to spend this summer, with £10m left over from the January window supplemented by £50m of his own coffers and £30m from the sale of Ayoze Perez to Leicester.

And the new manager will have to use all of his nous to bring in fresh blood that bolsters the Magpies’ quality – judging by their pre-season results so far, anyway.

When Tom Allen scored an own goal to consign Newcastle to a 0-4 defeat against Wolves in the Premier League Asia Cup on Thursday, you could almost sense the discontent amongst the club’s fans rising.

The starting lie-up they fielded was well below-par for top-level football, and that gave an indication of the near miracle that Benitez performed in keeping them up last season.

They were well-organised and drilled, with a defence-first approach that saw them concede just 48 goals – fewer than Arsenal and Manchester United.

It meant that their own goal threat was stilted – something Bruce will have to address if he wants to take the Magpies forward.

Somehow, Bruce needs to bring in new faces quickly, get them integrated into the squad and not defer too far from the basic tactical quirks that saw Benitez over-achieve rather markedly at the club.

You sense that’s the only way that this boyhood Newcastle fan will be able to win over the fans. Otherwise, it could be yet another turgid campaign for the long-suffering Magpies faithful.

Previous Post: « Why Punters Should Be Keeping an Eye on Derby Winner Masar’s Breeding
Next Post: Where Does Shane Lowry’s 2019 Win Rank in Open Championship History? »