It’s the worst thing that can happen on a racetrack.

We all love the thrill of a day at the races; watching the horses in the parade ring and having a flutter on the betting floor, before cheering our selection home down the final straight.

But when a horse falls, and is subsequently unable to recover, it does leave a rather bitter taste in the mouth.

Hence the scrutiny that Santa Anita Park, the famous track in Los Angeles, has found itself under this year.

All in all 30 horses have died while racing or training at the venue, and it’s a fatality rate that has even made the front pages of the newspapers in America.

And the concern now is that regulators may be forced to step in and alter the face of horse racing in North America, possibly forever.

Santa Anita is, in many ways, the Ascot of American racing.

While purists of the sport may favour other tracks like Churchill Downs or Keeneland, the LA venue is one that has attracted the monied and the famous down the years – Errol Flynn and Bing Crosby were two notable regulars.

The dirt track has welcomed some of the finest horses ever to grace the sport too, from Seabiscuit to John Henry.

The more recent trend for fatalities at the course has got many worried, and when the national newspapers begin a crusade against you they can be a particularly formidable opponent to fight off.

Powerful media tend to influence governments and key political figures, and that could be bad news for racing in the US.

There were 21 fatalities at the Breeders Cup host track between December 26 and March 5 alone, and that forced the course to be closed pending an investigation. Numerous Grade One events were cancelled as a result.

The most troubling trend is that it wasn’t necessarily in the heat of battle where the horses, including Breeders’ Cup Dirt Mile winner Battle of Midway, suffered their fatal injuries. Nine lost their lives while in training, and the numbers of casualties is around two-to-one on the venue’s dirt and turf tracks.

The root cause of the problem is not known, although many are pointing the finger of blame at the surfaces. The dirt track at Santa Anita was a mixture of sand and clay for decades, but in 2014 this was replaced by the specialist El Segundo sand.

The state also experienced unusually high levels of rainfall in the winter, and that in the end it could not penetrate the ‘sealed’ mud on the track.

Pressure is mounting to move the Breeders’ Cup, the so-called ‘world championship of racing’, to another track like Churchill Downs this year, as investigations into the state of the track continue.

In May, the Californian Governor, Gavin Newsom, endorsed the possibility of handing more authority to the California Horse Racing Board to suspend licenses where safety could not be guaranteed.

“The recent horse fatalities in California are unacceptable,” Newsom said. “We must hold the horse racing industry to account. If we can regulate horse race meets, we should have the authority to suspend licenses when animal or human welfare is at risk.”

So What Does This All Mean for Racing in the USA? 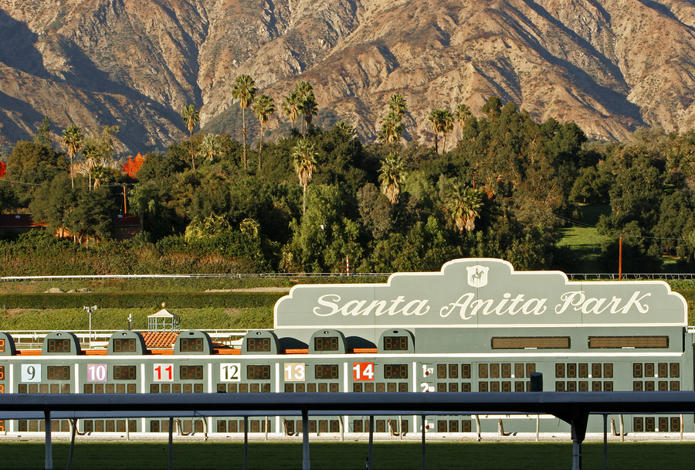 It should be said that, on the whole, the safety and welfare of horses at the USA’s other major tracks is not in question.

Even so, pressure is mounting to more widely regulate a sport that does not have a perfect record in terms of equine safety.

Indeed, when a publication as storied and famous as the LA Times writes a feature article entitled ‘we are running out of ways to tell Santa Anita to stop racing’, you know change could be a-foot.

The last time there was a significant spate of deaths, this time at the Aqueduct track in Queens back in 2011, the New York state powers ordered a task force to investigate. After five months, a variety of conclusions were made that led to significant changes to the sport in NY. Specialist medical staff were employed, and the rules regarding horses running on certain medications were strengthened.

Even so, not everyone is in support of horse racing – as we know from the UK – and animal rights campaigner April Montgomery perhaps spoke some prophetic words at a meeting of the California Horse Racing Board earlier in the summer. “Californians will end horse racing at the ballot box,” she said. “We’re going to end it, and it’s going to start with California.”

Pressure is mounting, and now the fatality and injury records of other tracks are coming under intense scrutiny. Churchill Downs, home of the Kentucky Derby and Oaks, is one venue above which the vultures are circling.

When quizzed on the future of horse racing in the US, the Jockey Club’s chairman, Jim Gagliano, said that reform is probable, not possible. “I will say it seems to be a strong catalyst for the industry to take the steps necessary to improve equine health.

“There is a strong feeling that the sport is at a tipping point. and comprehensive changes are being addressed.”

Racing, all around the world, has been here before. But the intensity of the scrutiny seems to get more extreme with each passing year. Where – and how – will it end.

Previous Post: « WH Stayers’ Million: One of the Richest Prizes in Horse Racing
Next Post: Football and Politics Collide Again as Bedoya Calls for US Gun Control During MLS Game »