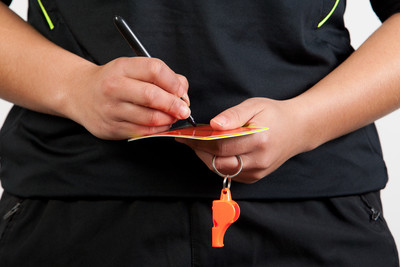 In reality, the UEFA Super Cup is something of a non-entity as far as early season football is concerned.

Sure, there’s a chance to bag some more continental silverware, but after their contrasting weekends you can rest assured that both Liverpool and Chelsea would rather not be flying out to Turkey at this premature juncture of the campaign.

However, those teams will be part of a slice of unique history in football, and the Super Cup in 2019 will surely prove to be a watershed moment for the sport.

Stephanie Frappart will be the first female referee to officiate a major continental match in men’s football when she takes the whistle in Istanbul. She will be joined by Manuela Nicolosi and Michelle O’Neill as her assistants.

The Frenchwoman has plenty of big match experience in the middle, having officiated the women’s World Cup final in the summer and a selection of Ligue 1 matches last season.

Are there any nerves? Forget about it. “We train a lot of all the time, so we are not afraid because we are always ready for all the games,” the 35-year-old said emphatically.

But this is the first time a big men’s match will be refereed by a woman, and you sense it’s just the beginning.

Indeed, more and more women are being appointed in the men’s game. Frappart is the trailblazer, but there are plenty who could be set to follow her into the spotlight.

Here are five female referees that could be gracing huge matches in the coming years.

Having led the way, the sky really is the limit for Stephanie Frappart.

She was added to the elite FIFA International Referees List in 2009, and just two years later she took charge of her first big men’s game in the Championnat National, which is France’s third tier.

Praise duly followed, and Frappart was promoted to take the whistle in Ligue 2 as of 2014.

And in 2019, she completed her run to the top of the sport by officiating the Ligue 1 contest between Amiens and Strasbourg.

The 35-year-old has refereed in two women’s World Cups, including that 2019 final between the USA and the Netherlands, and so she can handle the pressure of officiating huge occasions. She is a credit to the professions, whether refereeing men or women’s games.

Given that her father was a referee, perhaps it’s no major surprise that Bibiana Steinhaus followed in the family footsteps.

She has officiated in countless German women’s games, including the DFB-Pokal der Frauen final, and it was her calm discipline under pressure that caught the eye of Bundesliga officials.

The 40-year-old was elevated to referee in the German top-flight in time for the 2017/18 campaign, and she took charge of a handful of matches including Hertha Berlin and Werder Bremen. She remains a Bundesliga official to this day.

Steinhaus has major occasion experience, having officiated in a women’s Champions League final and an Olympic gold medal match back in 2012.

That experience could see her getting a call-up for men’s continental matches, and that may mean a reunion with Pep Guardiola, who she famously had a physical confrontation with when he was Bayern Munich manager back in 2014.

She is the highest ranked female match official in England, and that’s all while working a 30-hour week in the NHS.

Rebecca Welch may well be a superwoman, and she’s a highly-rated official who will surely make the step up to EFL and even Premier League action in the near future.

We are delighted to learn that Rebecca Welch has been promoted to Category 1 FIFA Referee.
This news is absolutely wonderful and is without doubt, just reward for all the effort and dedication Rebecca has put into her refereeing career. @RefsAssociation @DurhamFA @RAFAYthCouncil pic.twitter.com/5eH6hvtFU5

She has already taken the whistle in the National League, and the 34-year-old has officiated a women’s FA Cup final between Manchester City and Birmingham in 2017.

Another on FIFA’s list of key referees, Welch will presumably be coming to a men’s Football League game near you soon.

She was the trailblazer that cut a swathe through the men’s game.

On English soil, Sian Massey – as she has been known for most of her career – came to prominence when she was appointed as an assistant referee in the Premier League back in 2010.

She was added to the Select Group of officials in 2011, which is widely regarded to feature only the very best in the business.

Massey-Ellis has taken the whistle in a number of men’s matches, while running the line in a series of high profile games played by both genders.

Whether she referees or continues as something of an expert on the touchline, Massey-Ellis’ status as a leader in women’s officiating is assured.

It would be fair to say that the perception of female officials in the men’s game is not great in South America.

However, such outdated views need a ceiling-shatterer to come along and change views through their actions, and Claudia Umpierrez has certainly achieved that.

In 2016, she became the first woman in history to officiate a game in Uruguay, and shortly after she was granted the honour of being named one of the best referees in the world by the International Federation of Football History & Statistics.

The times they are a-changing, and old-fashioned chauvinistic views are being kicked to the kerb. We’ve not reached a level of complete equality yet, but the playing field is certainly being levelled.