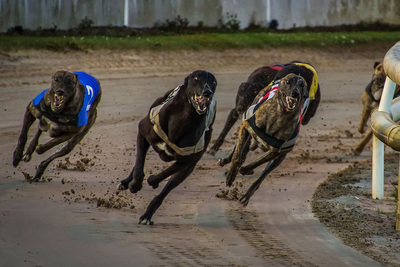 For fans of dog racing, the English Greyhound Derby is the undoubted pinnacle of the sport.

First held way back in 1927, the Derby enjoyed plenty of support in the intervening decades at its spiritual home at the White City Stadium, which played host to the 1908 Olympic Games, amongst other things.

When White City was closed in 1984, the action moved on to the purpose-built Wimbledon track, where it remained until that facility was demolished in 2017 to make way for property development and the New Plough Lane ground, which when finished will become the new home of the AFC Wimbledon football team.

And that is where the problems began. Amid dwindling interest in greyhound racing as a sport, the Derby has had to endure something of a nomadic existence, with its temporary home of Towcester also now closed after the holding company went into administration.

The English Greyhound Derby has now moved on to the Nottingham Greyhound Stadium, which is now one of the foremost venues for the dogs in the UK – primarily because there is so little competition with tracks closing at an alarming rate.

So where does the English Greyhound Derby go from here?

A general trend of dwindling attendances has had a clear knock-on effect to the number of greyhound tracks still active today.

The stats are alarming. In 1946, for example, which came a matter of months after the end of the Second World War, the total annual attendance for greyhound meetings in the UK topped 70 million, with nearly £200 million wagered per year. In 2017, attendances were down to just two million with just £75 million spent on the various bet types available.

Arguably most troubling is that there are just 21 licensed tracks in England and Scotland – down from 77 licensed premises and 200 independent tracks in the 1940s, with Harlow and Crayford the only tracks within spitting distance of the sport’s spiritual home in London. Seventy years ago, there were 33 independent dog tracks in the capital alone, but the demise of Wimbledon and Walthamstow has been indicative of the issues that organisers face.

That drop in interest has also affected prize money in the sport too. In 1980 the prize fund for the English Derby was £35,000, and if we fast forward 40 years it has barely trebled – compare and contrast that to the percentage increase in prize money for horse racing and other sports such as snooker and darts, and you can see why greyhound racing is said to be in terminal decline.

The Beginning of the End

Once upon a time, a trip to the dogs was a social event for people of all ages and social classes – even in the midst of the Great Depression attendance figures remained high.

Unfortunately, there are just so many other options these days, with attendances at football matches growing since the 1940s and with horse racing continuing to serve up a few different meetings every day up and down the land.

There was another problem, with many inner-city tracks becoming run down and an easy target for developers – as seen with Wimbledon, or facing financial problems as the sport becomes less profitable, i.e. Towcester.

In the 1960s, the landscape completely changed. The Betting and Gaming Act made it legal to bet off-course, and this meant that high street betting shops saw an upturn in takings – before, many punters went to the dogs just to get their bets on.

We see a similar trend continuing to this day, with many bookmaking firms now live streaming the action on their websites, apps and in their shops. These days, you don’t even need to leave home to place a wager on the greyhounds.

Just look at the staggering liquidity available on the Betfair Exchange for even the most bog-standard of meetings. A staggering £1.5 billion is wagered online – a far cry from the derisory returns at betting kiosks on the track, and explains perhaps why many people are choosing to stay away from attending this proud old sport in person.

Hopes for the Future?

It does seem a rather tall ask for greyhound tracks to get bums back on seats in their venues.

There has been a clear generational shift away from a night at the dogs to more studied betting at home or in betting shops, with wagers placed without needing to step out into the cold.

Investment is hard to come by too – just look at the debacle surrounding Towcester, and indeed when money does flood into the sport it seems to be a means to an end.

For instance, Coral have now purchased both the Romford and Brighton tracks. Is the firm really interested in investing in greyhound racing. Of course not; they simply want to be able to offer live streaming to their customers without any licencing problems.

All of which leads us back to the English Greyhound Derby, which seems to be without a permanent home and highly unlikely to return anywhere close to London in the coming years.

There is sponsorship from Star Sports and the ARC, while the Nottingham Stadium has seemingly displayed their interest in hosting the meeting for the foreseeable future.

They will again take on hosting duties in 2020, and perhaps greyhound fans need to get their heads around the fact that, for now, the sport’s pinnacle race will remain a non-London concern.

Previous Post: « The History of Towcester Racecourse: A Unique Home to Horse Racing
Next Post: Total Network Solutions and the History of TNS Football Club »