Of all the industries that make billions of pounds each year, none has gone through the regulatory mill quite like the betting sector.

From TV advertising bans and the FOBT maximum stake cut to the latest news that credit card gambling will be banned, UK bookmakers have taken a legislative pounding in the past couple of years.

The government’s law changes are ratified for the right reasons, with the aim of reducing the number of problem gamblers a fair enough goal.

But it’s worth remembering that, armed with a credit card, individuals can still run up huge debts by purchasing uncapped amounts of cryptocurrency, by trading stocks and shares and even simply by buying gifts at Christmas time.

Are there plans to outlaw credit card shopping any time soon?

Either way, conditions have been tough for the bookies and their share prices have started to take a toll too.

Upon the news that credit card gambling is to be outlawed, all of the major firms saw their share price fall considerably – even though only a relatively small percentage of their customer base, thought to be around 800,000 of the 24 million people who regularly gamble, uses their credit card.

So let’s take a closer look at three of the main gambling brands in the UK – William Hill, GVC Holdings and Flutter – and see how the various legislative measures have affected their share price in the past couple of years. 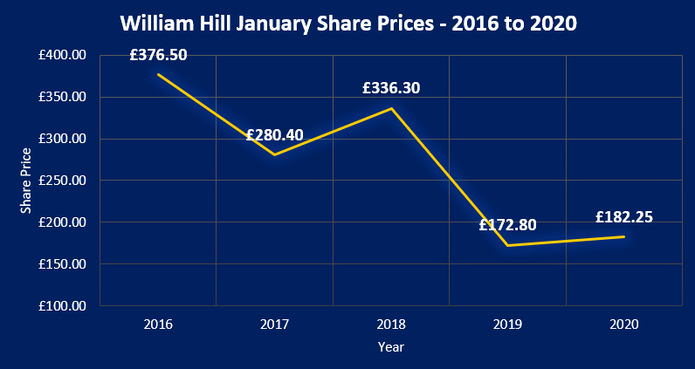 As you can see, the share price of William Hill has more than halved in the space of just four years.

There are many factors for this, and most of these have to be attributed to governmental intervention from the top-down.

The changes in law regarding FOBT machines was also a watershed moment for the industry. This saw the amount that an individual can wager on a fixed odds betting terminal slashed from £100 to £2 – again, a move designed to curb problem gambling, and a move that has considerable knock-on effects to the sector.

In a report conducted by the Mail on Sunday, they found that up to four betting shops a day were having to close their doors, putting thousands of people out of work.

Those restrictions, announced in 2018 and originally planned for April 2020 (before being rushed forwards to 2019), have had a significant impact upon the share price of William Hill – indeed, you can see their stock fall by around £160 per share after the announcement.

The firm have been particularly hard hit by the FOBT regulations given their significant high street presence, and in the wake of this governmental intervention they announced plans to shut more than 700 UK betting shops – an obvious bear sign for stock traders. That was matched by their financial reporting, which warned of disastrous results. In the end, their 2019 accounts yielded a loss of £64 million in the first months of the year.

Most recently of all, the share price of William Hill fell by a whopping 3.2% in the space of 12 hours when it was revealed that the government was implementing their blanket ban on credit card gambling.

It hasn’t been complete doom and gloom, however, with the firm upgrading their profit expectation for the next trading window to be up to £143-148 million – that saw their stock price rise by some £7 per share.

But the overall picture is dire, and this is a company that has seen its value halve in barely four years – imagine if Amazon or Apple saw similar losses. The media would suggest the world is coming to an apocalyptic end!

Can William Hill’s share price ever return to those highs of five or six years ago? Given the continued crusade against the betting industry, you would have to suggest not.

The good news for William Hill stock holders is that the brand continues to perform well in the USA, and given that expanding market has almost untold levels of potential this may be the frontier that keeps the firm – and the gambling industry in general – at previously profitable levels. 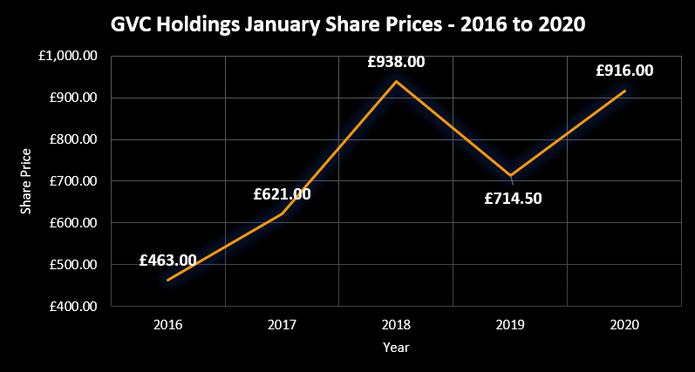 The share timeline of GVC Holdings is an interesting one, because through a number of sensible acquisitions they have been able to protect themselves, somewhat, from governmental intervention.

For example, they are still trading at roughly the same share price today as they were in January 2018 – whereas William Hill are down roughly 45% on the same period. It probably helps GVC that they have a diversified portfolio of brands that extends beyond just sports betting, such as their bingo and casino imprints.

It is possible to bulletproof yourself to some extent then, as GVC Holdings did when they acquired Ladbrokes and Coral in December 2017, before making moves in the US by signing a deal with MGM Resorts to provide sports betting in their properties – both moves saw their share price rocket, and it has rarely declined since.

That’s not to say they haven’t faced challenges, however. The FOBT debacle saw them trade as low as £519 per share – down more than £400 on their all-time high. Ladbrokes’ announced that they are planning to close some 900 shops in the coming years, which had a devastating impact upon their value on the stock exchange.

However, they have rallied since, and even the 2.8% drop witnessed on the day that the credit card gambling ban news was released had already been buffered by the news that the GVC Holdings profit forecast had been upgraded after ‘higher than expected’ revenues were recorded.

Swiss banking firm UBS rates GVC as a better ‘hold’ for share traders than William Hill, which suggests that governmental intervention does not necessarily impact upon all betting firms equally.

“Our illustrative analysis suggests the greater potential impact for William Hill given high exposures to the UK and lower margins,” the UBS spokesman said.

“For GVC, we see the lowest impact for a funding or staking limit given a lower UK exposure.” 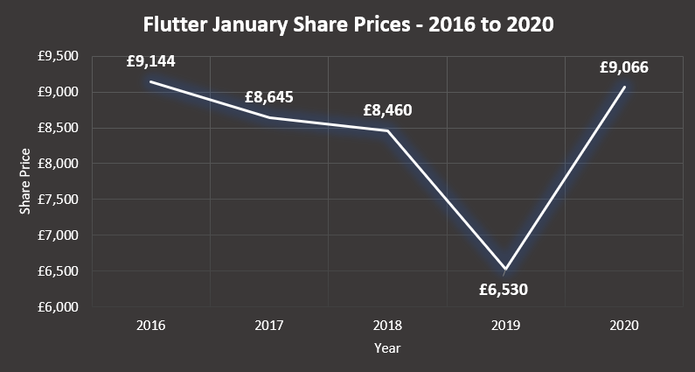 Another gambling operator that has been able to insulate themselves from long-term share price damage is the Flutter Entertainment group.

They are trading at a healthy price these days, and aren’t a huge amount down on their all-time high.

However, look at that dip experienced in January 2019 – the first reporting period after the FOBT cut was introduced.

Imagine holding stock in Flutter at this point, and seeing more than £3,000 disappear from your value per share!

They have rallied, however, largely due to a succession of smart acquisitions and a business model more focused on online operations than the high street courtesy of Paddy Power and Betfair.

Flutter have also purchased a full or part share in the likes of FanDuel and the Stars Group, which has diversified their product offering and consolidated their online expertise.

But they aren’t immune to governmental intervention. Just take a look at these share prices: on January 3, each Flutter share was worth £9,456. Then the news of the credit card ban was introduced, and they flopped to £9,070 – a significant 4.08% reversal. 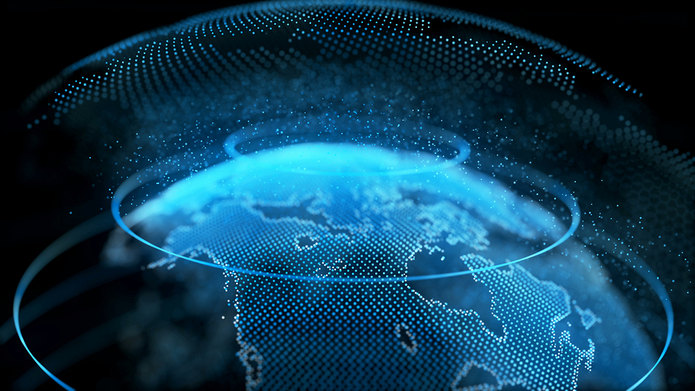 Diversify, acquire well – especially in the USA – and focus online: this seems to be the blueprint for minimising the damage caused by governmental intervention.

There will be plenty more challenges forthcoming from the regulators, and it wouldn’t be a huge surprise if the UK Gambling Commission introduces a complete ban on betting firms sponsoring football teams and sporting events in the near future – another factor that would impact upon profitability and these share price.

Technological shifts will continue at pace too, and so betting firms that rely heavily on the high street are also likely to face renewed challenges in 2020 and beyond.

The gambling industry is changing, and while attempts to minimise problem behaviour are welcomed by everyone, how long will it take for the government’s attempts to remove society’s freedom of choice to decimate the betting sector beyond repair?

Previous Post: « Sportswashing and Saudi Arabia
Next Post: Is Pinatubo the Greatest Two-Year-Old of the Past 25 Years? »