In informal conversation but without any real conviction, Lewis Hamilton has mentioned the r-word: retirement.

Whether imminent or in a few years’ time, the sport of Formula One will be left with a major hole when the Brit finally decides to hang up his helmet, and purists will be hoping that a new star emerges as far as a recognisable world star is concerned.

There are candidates – a rivalry between Max Verstappen and Charles Leclerc at the top level would be welcome, but what a story it would be if the legendary ‘Schumacher’ name re-emerged in the near future.

And it just might, you know. Mick Schumacher is the 21-year-old son of the incomparable seven-time world champion Michael, and early in October he had his first taste of life as an F1 driver.

The young gun acted as a practice session driver for Alfa Romeo ahead of the Eifel Grand Prix at the Nurburgring, and that is a well-trodden path into the sport – he will, of course, hope to be the main driver of a team sooner rather than later.

And don’t think this is a ‘job for the boys’ or that nepotism is at play. The young Schumacher has enjoyed a fine career in other racing disciplines already, and as a member of the Ferrari academy he is being primed for a lengthy career in F1 – just like his old man.

“I am overjoyed to get this chance in free practice,” Schumacher jnr said in anticipation of his F1 debut.

“The fact my first participation in a Formula One weekend will take place in front of my home audience at the Nürburgring makes this moment even more special.”

Who knows where the journey will take him?

Who is Mick Schumacher?

Like so many aspiring Formula One drivers, Mick Schumacher’s career began in karting – the same route to the big time that Hamilton himself took.

He had progressed to the German organisation, ADAC Formula 4, by 2015, and after a successful first season he was given the keys to the Prema Powerteam vehicle that competed in both the ADAC and Italian Formula 4 championships. Mick would finish second in both campaigns to cement his status as an up-and-comer to watch.

Schumacher then competed for Prema in the Formula 3 European Championship, and after a ‘getting to grips’ style season in 2017 he improved incredibly a year later, taking the title with eight wins and fourteen podium finishes in all across the 30 races.

Ascension to the Formula 2 Championship followed in 2019, again at the wheel of the Prema Racing team, saw a 12th place finish in his maiden campaign, but like the old chip off the block he is it wasn’t long before Mick was back in the winner’s circle. At the time of writing, he leads the 2020 F2 Championship by a comfy 22 points to his nearest challenger with just four races remaining.

Success has followed the young Schumacher around, so is he poised for more glory in Formula One in the near future?

Will Mick Schumacher Drive for Ferrari? 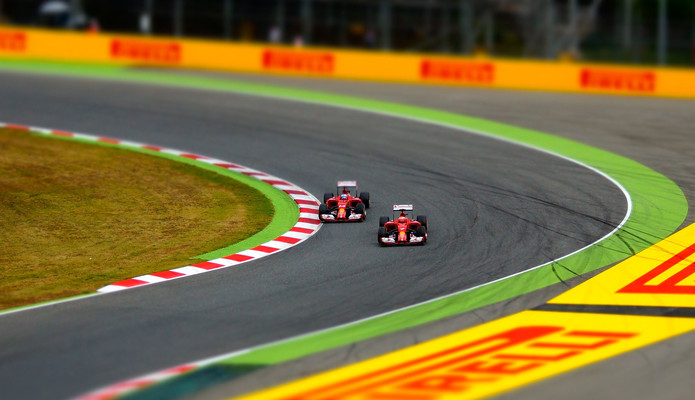 As his inexorable rise continues, so too does chat about the prospect of another Schumacher tearing round Grand Prix circuits in the red car of the Prancing Horse.

Good things come to those who wait, of course, and more likely is that Mick will start his F1 career elsewhere until he has got to grips with the sport’s unique machinations.

He is currently an affiliated member of the Ferrari academy, a programme that funds training and mentorship for prospective Formula One aces, and clearly following in the footsteps of his father would be high on the agenda.

The likes of Alfa Romeo and Haas have, in the past, acted as a sort of feeder team to Ferrari, and so it’s quite possible that Schumacher’s first engagement in Formula One will be with one of those operations.

Intriguingly, neither has settled drivers for the 2021 season with contract negotiations ongoing, and indeed Kimi Raikkonen – the principle driver for Alfa Romeo – is expected to retire at the end of the 2020 campaign. It’s not beyond the realms of possibility that Mick will be sworn in to F1 sooner than even he might have expected.

And then you have the Haas team principal, Guenther Steiner, who has confirmed that his team are considering their options, he said the following in an ominous warning for current pair Romain Grosjean and Kevin Magnusson.

“If you think in the long term then maybe we should do a year with young drivers and prepare them for 2022, because that is also an investment,”

So strap yourselves in F1 fans, it looks as if the name ‘Schumacher’ might be heading to a Grand Prix track near you very soon….

The US based Haas F1 team has confirmed that Mick Schumacher will race for them from the 2021 Formula One season. Schumacher will partner with fellow rookie Nikita Mazepin who has been competing against the German in Formula 2.

They replace the outgoing drivers Kevin Magnussen, who joined in 2017, and Romain Grosjean who has raced with Haas since 2016. Grosjean suffered a horror crash in the 2020 Bahrain Grand Prix, suffering burns when his car crashed through barriers on the first lap, splitting in two and bursting into flames.

Both Schumacher and Mazepin have signed multi-year deals with the constructor, could we be seeing a future F1 champion driving for Haas in 2021?

Previous Post: « What Impact Will the New Handball Laws Have on the Future of Football
Next Post: What Will Happen to William Hill’s UK Customers After Huge Caesars Sale? »