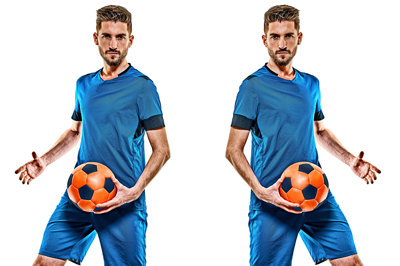 For all but the most passionate of Italian football fans, the Serie A clash between Napoli and Benevento would have passed by without so much as a second glance.

But for the Insigne family, it was an extraordinary day – Lorenzo would be facing off against younger brother Roberto in the ultimate sibling rivalry.

Remarkably, both scored for their respective teams in Napoli’s 2-1 win, and while we couldn’t find any stats to confirm as much there can’t have been many other times when brothers have scored in the same game for opposing teams.

All of which got us thinking….who are football’s all-time leading sets of siblings?

They are, arguably, the most famous brothers in English football.

Bobby Charlton, you may recall, was part of the famous ‘Busby Babes’ era for Manchester United, during which he won three Division One titles and the European Cup. He won the Ballon d’Or in 1966.

Jack won the Division One title and the FA Cup with Leeds United, and he is also well remembered for his fine managerial work with the Republic of Ireland – leading them to two memorable World Cup performances.

Together, Bobby and Jack were part of English footballing history as part of the national team squad who, unforgettably, lifted the World Cup in 1966.

Not a lot of people know this, but Liverpool man Thiago Alcantara and PSG’s Rafinha are actually brothers.

They are the sons of former Brazil legend Mazinho, and the pair came through the youth ranks at Barcelona – Thiago moving on to Bayern and Rafinha staying at Camp Nou for much of his career before joining the Parisians in the summer.

Between them they have 41 international caps (Thiago has opted to represent Spain, Rafinha plays for Brazil), seven German Bundesliga titles, five La Liga wins, three Champions League triumphs and, in Rafinha’s case, an Olympic gold medal. That’s not a bad haul at all!

The Milan derby is one of the most bitter and hotly contested fixtures in football, so imagine how the Baresi household felt when brothers Giuseppe and Franco went to war.

Giuseppe was an Inter Milan stalwart who helped the club to two Serie A titles and a UEFA Cup, while Franco is remembered as a classy defender for AC Milan whose trophy cabinet includes six Serie A wins, three European Cups and a World Cup.

Perhaps the proudest day for the brothers came when they were both selected to represent Italy at the European Championships in 1980.

They say that blooder is thicker than water, and that’s perhaps why the kinship between Fabio and Pablo Cannavaro has lasted into their forties – the duo are now on the coaching staff of Chinese side Guangzhou Evergrande.

Paolo built a reputation as a rock solid defender at Napoli, but it was Fabio who made a greater mark on the elite-level of the game.

He remains one of the few defenders to ever win the Ballon d’Or, and his trophy haul includes Serie A and La Liga titles and a World Cup with Italy in 2016.

While its common for similarly aged brothers to come through the youth ranks together, it’s rare for them to play the bulk of their adult careers together as well.

But Frank and Ronald de Boer did just that, forming a key part of the outstanding Ajax sides of the 1990s.

They won five Eredivisie titles as the Amsterdam outfit dominated Dutch football throughout the decade, and in 1994/95 they added the Champions League to their already stuffed trophy cabinet.

They say that it can take just seconds to realise that two people are related simply by observing their behaviour.

You didn’t need to be a detective to know that Filippo and Simone Inzaghi were brothers – the gangly, lank-haired frontmen shared a love of putting the ball in the net in amongst being caught offside ten times a game.

Simone is a cult favourite at Lazio to this day, while Filippo’s achievements in the game – three Serie A titles, two Champions League winners’ medals and a World Cup – speak for themselves.

It’s amazing to think that in 2021, the archives of brothers who have won a major international tournament together could have another entry.

You probably know about Romelu Lukaku already; the former Manchester United and Everton frontman now banging them in for Inter Milan.

He also leads the line for Belgium, and he is often joined in the starting eleven of Roberto Martinez’s side by his brother Jordan, a left back who turns out for Lazio.

The Belgians are among the favourites to win the rescheduled Euro 2020, and so the Charltons could soon have some brotherly company.

What a sporting family the Nevilles are.

You’ve got dad Neville Neville (no, that’s not a typo), who was a talented cricketer in Lancashire, and sister Tracey, who captained England’s netball team.

But most football fans will be familiar with Gary and Phil Neville, the full backs who represented Manchester United and England during the nineties and noughties.

Together they won six Premier League titles and a Champions League, also representing England at World Cups and European Championships on the right and left of the defence.

They remain heavily involved in the game with a controlling stake in Salford City, while Gary is a respected pundit and Phil has just announced he will leave his job as England Lionesses’ head coach in 2021.

Previous Post: « What is the Horserace Betting Levy Board, and How Does It Fund UK Horse Racing?
Next Post: Swift Justice: Coleman the Latest to Join the Ranks of 100m Sprinting’s Hall of Shame »