Anyone with even just a passing interest in football will know of the rivalry between Liverpool and Manchester United.

It’s a conflict that is both competitive, given how they have battled for supremacy in the beautiful game in England over the decades, and geographic, with barely 30 miles separating their respective Anfield and Old Trafford homes.

Maybe it’s a bit unexpected, but the 2020-21 season is shaping up to be another titanic collision between the two giants of the English game. They are locked together at the top of the Premier League table, and on January 17 they will meet in what will be the proverbial ‘six pointer’ even this early in the title race.

As such, it seems timely to put the two clubs under the microscope, comparing their achievements in both the bygone and contemporary eras and perhaps even answering the ultimate question in football – are Liverpool or Manchester United the more successful club? 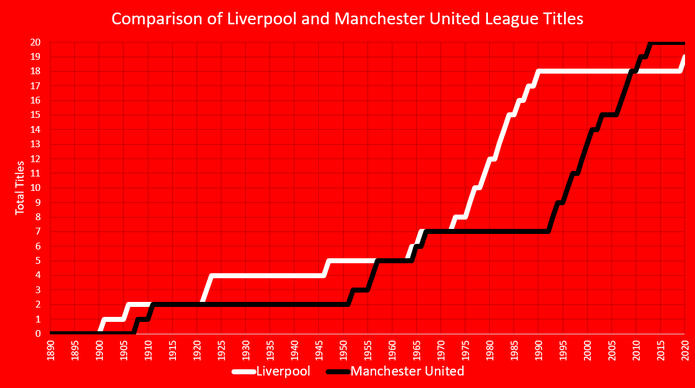 If you want to, you can trace the origins of the English top flight back to 1888/89, which is generally considered to be the first official season – pub quiz fans will know that Preston were the inaugural English champions.

We can plot the success points of both Liverpool and Manchester United throughout the century-and-a-bit that has passed since, with both enjoying periods of dominance.

Liverpool were crowned English champions for the first time in 1900/01, and they would only have to wait five years for their next title. Manchester United, meanwhile, didn’t take long to get in on the act, winning the league twice in 1907-08 and 1910-11.

Back-to-back title wins for the Merseysiders came between 1921 and 1923, but you have to fast forward to the 1950s and 60s before you see a period of dominance – United’s ‘Busby babes’ era culminating in five First Division titles, seven runners-up finishes and a host of other trophies. Incidentally, Liverpool won the title on three occasions during Matt Busby’s tenure at Old Trafford, which in itself is not too shabby.

Into the 1970s and 80s and Liverpool were the premier force in English football, claiming an unprecedented eleven titles in just two decades – United, on the other hand, did not win a single championship in that time.

The First Division became the Premier League in time for the 1992-93 season, and United claimed the first title of the rebranding – all told, they won eight of the first eleven editions of the competition.

More silverware followed under Sir Alex Ferguson, and Liverpool fans would have to wait until 2020 for the first time that their side had gotten their hands on the trophy in 30 years.

The Verdict: It’s a close run thing, and amazingly in more than 130 years of competition there is just one league title between the two clubs – Liverpool 19, Manchester United 20. 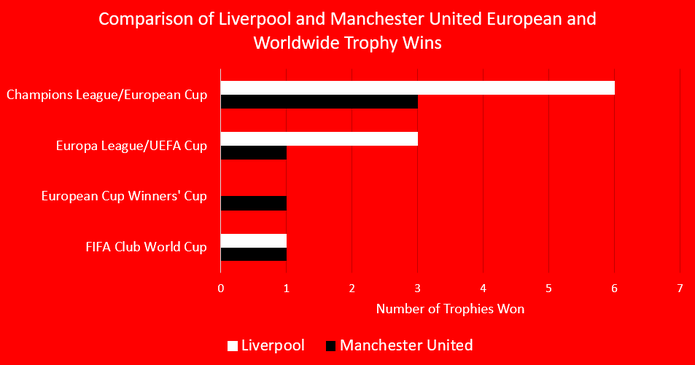 There have been countless continental competitions down the years, but let’s start with the European Cup/Champions League given that this is the most prestigious.

The Busby Babes clinched the first continental glory for Manchester United back in 1969, and it wasn’t until their next managerial giant – Sir Alex Ferguson – came along that they would experience more, with further Champions League wins coming in 1999 and 2008.

If we throw other continental competitions into the mix, we can also consider the UEFA Cup which latterly became the Europa League. Liverpool have lifted that trophy on three occasions – 1973, 1976 and 2001 – with Manchester United’s sole victory coming in 2017.

Lest we forget Manchester United’s win in the UEFA Cup Winners’ Cup in 1991, while they and Liverpool have both triumphed in the FIFA Club World Cup – United in 2008 and the Reds in 2019.

The Verdict: Both of these footballing giants have enjoyed plenty of success in Europe and around the world, but it’s Liverpool’s trophy haul of ten just beating United’s own collection of six. 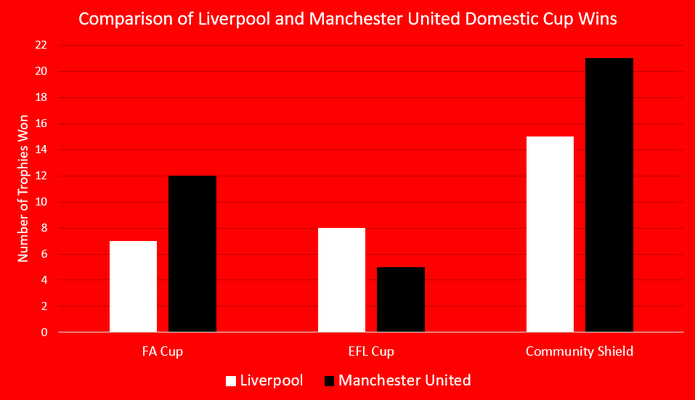 Established in 1871, the FA Cup was for a while one of the absolute pinnacles of English football – it’s a shame the magic of the cup has been tarnished somewhat since.

It’s a competition that has been kind to both Liverpool and Manchester United, although it’s the Red Devils who have got their hands on the famous trophy on more occasions – they have 12 wins compared to the Merseysiders’ seven, and 20 final appearances compared to 14.

The League Cup is considered more of an annoyance than a target for many clubs in these days of packed fixture lists, but it’s been good to Liverpool over the years and they have lifted this trophy more than any other side – eight times, to be precise. Manchester United have won the League Cup on five occasions.

And finally we have the Community Shield….meaningful competition or glorified pre-season friendly? Each to their own, of course, but it’s worth noting that Manchester United have won this game 21 times (more than any other club) and Liverpool on 15 occasions.

The Verdict: As you can see, Manchester United boast quality and quantity, with more domestic cup victories than Liverpool and more in the one that, arguably, counts the most – the FA Cup.

As we have come to learn, big spending on new signings isn’t always a pre-requisite for success nor does it guarantee a trophy-laden season, however both Liverpool and Manchester United have benefited from significant spending through the years.

United were the first of these sides to throw their financial weight around, but it took until 1962 for them to really open up the purse strings – breaking the British transfer record to sign Denis Law from Torino for £115,000.

United have broken the domestic transfer record on six occasions, whereas Liverpool have been rather more circumspect – only Stan Collymore (£8.5 million, 1995) qualifies. Virgil Van Dijk became the most expensive defender in the world when he joined the Reds in 2018, however.

For a more modern day context, here is each club’s transfer spending in the past ten seasons:

It’s not just how much you spend, but the value you are getting. On that front, Liverpool have been far more effective than Manchester United in modern times.

The Verdict: You could argue that Manchester United have splashed the cash more than Liverpool over the years, and have they been rewarded? Their trophy cabinet suggests as much. But it’s clear than in modern times Liverpool undoubtedly have the edge on quality of spending.

Previous Post: « Why Does Rain Cause the Cancellation of Horse Racing Meetings? Could More Artificial Surfaces Help?
Next Post: Heads or Tails: When Football Matches & Tournaments Have Been Decided by a Coin Toss »