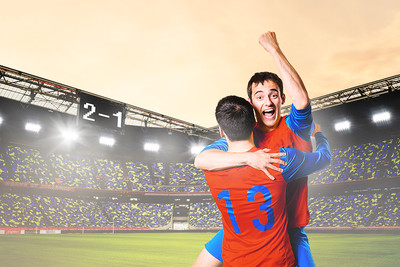 On a packed weekend of quality sport, Sunderland’s 4-1 win over Doncaster Rovers will have gone largely unnoticed outside of Wearside and South Yorkshire.

But it was a game that delivered a very unusual set of circumstances. Firstly, Charlie Wyke netted all four goals for the Black Cats – a quad remains an rare feat in the professional game, and eve more unusual was that all four of the frontman’s strikes were assisted by the same player: Aiden McGeady.

It’s been a while since Sunderland graced the Premier League of course, but the deadly duo of Wyke and McGeady got us thinking about the most lethal combinations of scorers and creators that have ever lined up together in the top flight.

Now, at the time of writing, Harry Kane and Son Heung-min are in danger of eclipsing the rest on this list, but as things stand here are the best goalscorer-assister combinations in Premier League history.

Given that both of these players were such prolific marksmen and hard-working teammates, it’s no wonder that Frank Lampard and Didier Drogba are the Premier League’s most dynamic duo.

Of the 36 goals in which one assisted the other, according to data provided by OPTA, it was Lampard who set up Drogba on a whopping 24 occasions.

Of course, the midfield ace went on to become Chelsea’s top goalscorer of all-time, while together he and Drogba claimed three Premier League titles, four FA Cups and the Champions League in 2011/12.

“Whenever I felt I was getting the ball [and passed it] over, I knew Didier would run and we talked about it — where exactly he wanted it, the defender he felt would get sucked in to the first movement and we could go in behind.”

Sitting just four goals behind Lampard and Drogba, it’s likely that Son Heung-min and Harry Kane will become the most prolific goal-assist duo during the 2020/21 season.

Where would Tottenham be without them? Struggling, that’s for sure, and to give an indication of what Kane and Son have achieved their combination for 14 goals is already the best return for a single Premier League campaign in this category.

It might surprise you to know that Kane has supplied more goals for Son than vice versa this season, which reflects the changing tactics of Jose Mourinho and the England striker’s willingness to drop deeper and create rather than wait for the ball to arrive at his feet in the penalty area.

When asked about their combination play, Kane told reporters:

“When I am passing it to him and he is cutting inside and whipping it top bins it is an easy game for me.”

When he left the club, David Silva was given an almighty send-off by everyone at Manchester City, and the diminutive Spaniard’s role in their rise to Premier League champions cannot be understated.

But any good creator needs a reliable goal-grabber, and Silva worked with one of the best around in Sergio Aguero – the Argentine scored 21 times courtesy of the Spaniard’s probing.

In a book about Silva, Aguero called the left-footed wizard a ‘legend’ of the game, while Silva repaid the compliment when he claimed to the press that the Argentine made him look good.

“The stats are there – I gave him lots of assists, and to be fair he makes it very easy because he knows how to find the spaces and is clinical in front of goal. He is one of the best in the world.”

In a reign of terror that brought them two Premier League winners’ medals – including that remarkable ‘Invincibles’ campaign of 2003/04 – two FA Cup wins and a Champions League final, Robert Pires and Thierry Henry were one of the most eye-catching attacking duos around.

Their best work came during those halcyon days of 2003/04, when the pair combined for a whopping 17 goals.

Both were World Cup winners too who played alongside some of the best players on the planet, but you can tell this pair reserved their favourite moments when they were combining out on the pitch.

Of course, there was the occasional dark moment – darkly comic too, when they combined to attempt a cheeky penalty against Manchester City when Pires attempted to roll the spot kick to the onrushing Henry. Sadly, the former didn’t make forward contact with the ball, and thus the latter was unable to strike it at goal.

England fans of a certain vintage will remember the striking duo of Teddy Sheringham and Alan Shearer, who combined with such panache for their country – particularly at Euro ’96, where 30 years of hurt were so nearly ended.

Sheringham benefited from a similarly telepathic relationship at club level, this time with Darren Anderton at Spurs, who provided 27 goals for ‘Shezza’ including 20 in a single campaign.

While plagued with injuries, Anderton was regarded as one of the best young English talents of the 1990s, and his combination play with Sheringham earned both call-ups to the England squad….who knows, if Gazza had connected with Shearer’s cross in the Euro ’96 semi-final he could have been a European Championship winner.

Previous Post: « Why Does Racing Get Abandoned On An All-Weather Course?
Next Post: The Hundred: Everything We Know So Far About Cricket’s Bold New Format »