They say that the wisdom of the crowd is the shrewdest judge in sports betting, and so the market favourite should – in all reality – go on to win a specific event or at least contest it at the business end.

Of course, we know that isn’t always the case – that’s what makes having a flutter unpredictably good fun – and so often a favourite in a football match or a horse race is overturned.

But over the course of a two-week tournament? Surely the betting favourite would prevail over that longer span of time with more margin for error? We know that a defeat in the group stage of the European Championship is not a disaster, and that many teams have gone on to prevail in major tournament football despite tasting defeat early on in proceedings.

So, in theory, the favourites should have a good record in the Euros, and that would certainly prick the ears of England fans who know that their side is currently the market leader to prevail at the rescheduled Euro 2020.

But do the history books show that the favourite tends to have their way in the European Championships? Let’s take a look at the last four editions of this great tournament to find out more.

Pre-Tournament Favourites at the Euros

Despite having failed to even qualify from their group at the World Cup in 2002, France were installed as favourites to win Euro 2004 by the bookies at odds of 10/3.

Les Bleus’ campaign hardly got off to the best of starts – they found themselves 0-1 down to England in their opening group game, but two injury time goals from Zinedine Zidane ensured they finally found their feet.

A win over Switzerland and a draw with Croatia secured their passage to the quarter-finals, but there they ran into tournament surprise package Greece – more on them shortly. Suffice to say, the attacking talents of Zidane, Thierry Henry, David Trezeguet and Robert Pires could not find a way past the disciplined Greek defence, and an Angelos Charisteas goal dumped the favourites out of the competition in the last eight.

As for the other betting market principles, Italy (5/1) completely flattered to deceive and finished third in Group C behind Sweden and Denmark, while England’s (8/1) hopes were ended in – you guessed it – a penalty shootout against Portugal (15/2).

The hosts would progress to the final, but they – like a few before them – had no answer to the diligence, hard work and organisation of Greece, who produced one of the most incredible underdog stories in international football history to win Euro 2004 at princely offs of 100/1….you could even get 150/1 on the betting exchanges! 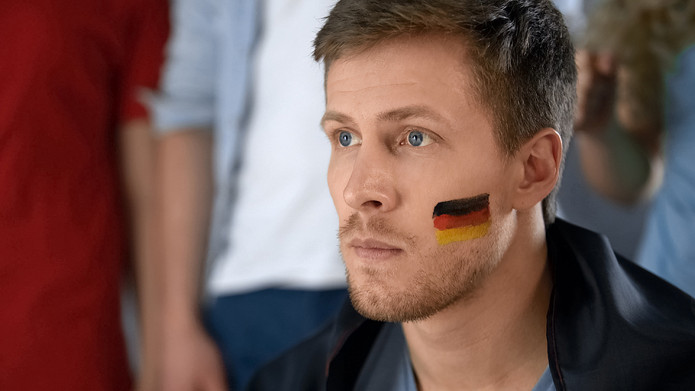 At the World Cup in 2006 it was Italy that prevailed over France in the final on penalties, and yet neither of those protagonists was the favourite at Euro 2008.

That honour went to Germany, who were expected to assert their authority on major tournament football once more.

They started life in Group B well enough, with a Lukas Podolski brace earning them a 2-0 victory over Poland.

But they were beaten 1-2 by Croatia next time out, and needed a win over Austria in their final group game to get over the line. A goalless first half was not on the agenda, and it was left to Michael Ballack to net the all-important strike that would just about sweep them into the last eight.

A pair of 3-2 victories over Portugal and Turkey took the Germans to a much-predicted final where they would take on Spain, the 13/2 second favourites – the betting market was certainly on point here.

However, the market principle did not complete their expected victory, as a Fernando Torres goal in the first half of the final guided Spain to the final and ensured the betting favourite was downed for a second consecutive edition of the Euros.

Spain’s victory at Euro 2008 would spark a period of dominance on the international stage, and their subsequent triumph at the 2010 World Cup in South Africa was one of the few times that a national has been crowned world and European champions concurrently.

And so the Spaniards were warm favourites heading into Euro 2012, which would be co-hosted for the first time by Poland and the Ukraine.

An opening draw with Italy, followed by a 4-0 thrashing of the Republic of Ireland, put the 11/4 favourites in a strong position in Group C, although they still needed a late Jesus Navas goal to save them against Croatia in the final match of the bracket.

A routine 2-0 win over France took the Spaniards into a semi-final against neighbours Portugal, and a cagey affair was eventually settled by a penalty shootout – Bruno Alves’ miss sweeping Spain into the final against Italy.

The Italians, available at 14/1 to win Euro 2012 prior to a ball being kicked, had surprised many with their run, but they eventually ran out of steam in the final against Spain’s possession football and the world champions ran out comfortable 4-0 winners – this time, the pre-tournament favourites well and truly lived up to the billing.

Having won the World Cup in 2014 – demolishing hosts Brazil 7-1 in the semi-finals – you would have thought that Germany would have been a shoe-in to be favourites at Euro 2016.

The Germans, however, were considered a 4/1 shot by the betting public, and instead it was France – on home soil – who were backed into favouritism at 10/3.

Anyone that had placed a few spare pennies on the French might have been regretting it after a fairly abject group phase, however. They needed an 89th minute winner to see off Romania, were held to a stalemate by tournament debutants Albania until injury time and then drew their final Group A encounter with Switzerland.

Meanwhile, the Germans had won Group C with quiet authority, Spain (11/2) reached the knockout stage despite defeat to Croatia and England (9/1) just about scraped through too despite dropping points against Russia and Slovakia.

However, Spain and England would depart at the last 16 with losses to Italy and Iceland respectively, while Germany and France were paired together in the semi-finals – the latter prevailing to keep their hopes alive of lifting the trophy in front of their own fans.

Standing in their way was 22/1 hopefuls Portugal, who despite a first-half injury to talisman Cristiano Ronaldo were able to grind their way to extra time against the dominant hosts.

And there, they would secure an upset win for the ages when Eder fired home to break French hearts and land the victory for his side.

So there you have it – backing the favourites in the European Championship is not all it’s cracked up to be, and you shouldn’t be afraid of having a flutter on a few outsiders either!