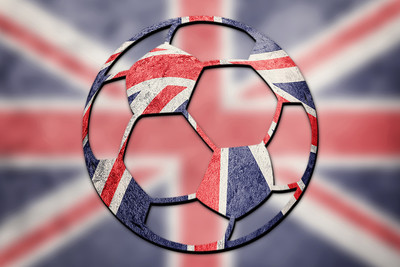 It was 25 years ago that England and Scotland served up a slobberknocker as part of the outstanding Euro ’96 tournament.

With Wembley Stadium packed to the rafters with both home and away supporters passionately supporting their respective countries, a nip-and-tuck affair was eventually settled by Paul Gascoigne’s moment of brilliance in the second half.

Fast forward the best part of three decades, and the two old enemies were paired for a rematch at the European Championships of 2020 (or 2021 if you prefer).

The hyperbole reached fever pitch and expectations of a repeat of the action of 25 years ago was hoped for, but as tends to be the case in these situations both teams huffed and puffed and never before has there been a more 0-0 game than the one serve up at Wembley on June 18.

All of which got us thinking: which of the home nations, so we’re also throwing Wales and Northern Ireland into the mix, have performed the best against each other?

For the purposes of this exercise, we’re focusing only on the most important matches – i.e. World Cup and European Championship encounters, plus qualifiers for both of those tournaments too.

Who are the reigning kings of the United Kingdom?

For this look at who has performed best in games between England and Scotland, we’re disregarding all of the Home Nations Championship style tournaments – those were immensely popular throughout the twentieth century, right up until the 1980s in fact.

And so we start with the clash between the two nations in the World Cup qualifying in 1950, which England won 1-0 thanks to a Roy Bentley goal. Since then, there has been nine other games that fit the bill for our study. 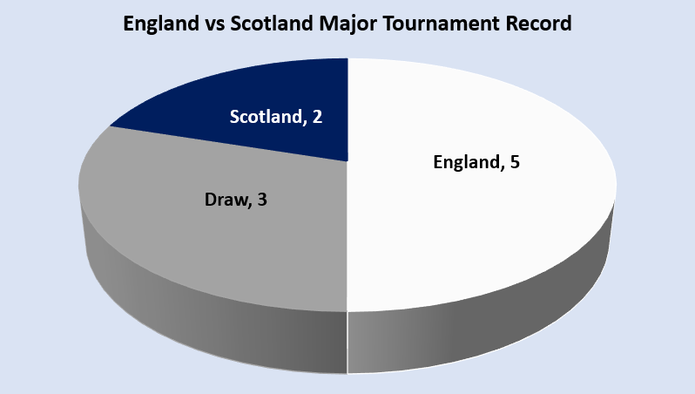 England have had the upper hand in the ten meetings in our rundown, although you may well have expected the Three Lions to have perhaps won more than 50% of their clashes with the Auld Enemy.

In the classic points format, England average 1.80 points per game against the Scots, and the Tartan Army have claimed 0.90.

Incidentally, we didn’t mention the three games that took place in the Rous Cup, a unique tournament of the late 1980s that saw England, Scotland and an invited team from South America compete in a classic round robin format.

England and Wales played each other dozens of times between the late 1800s and the 1980s in the British Home Championship, and it’s the English that have prevailed in 68 of the 103 games played in all competitions.

But if we drill down into the numbers some more and look at only the most important of games, we can see that Wales have never beaten England in a World Cup, European Championship or qualification game! 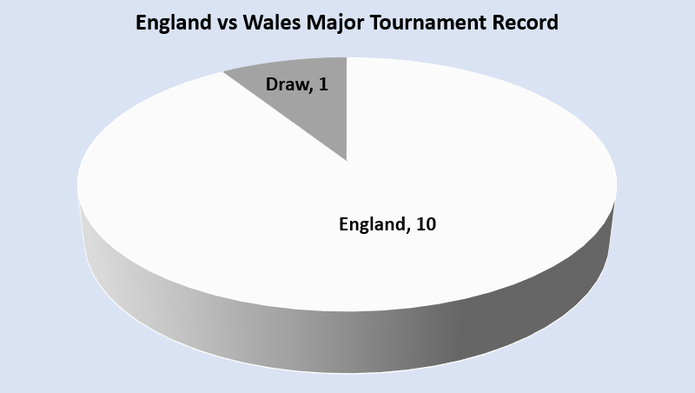 Indeed, England have prevailed in ten of the eleven meetings, with the only aberration being a 1-1 draw in qualifying for the World Cup of 1974. 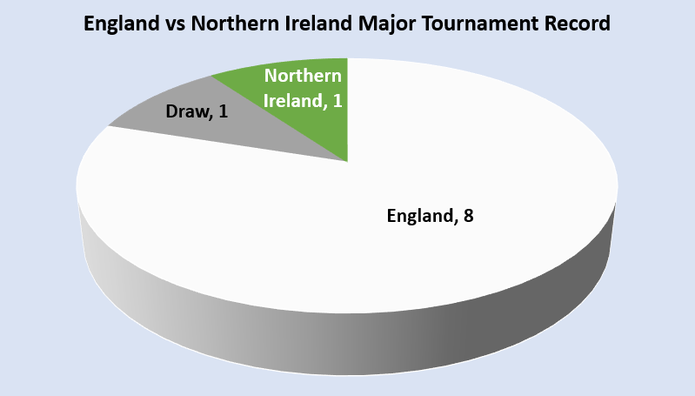 Again, it’s another home nations fixture that England have dominated. In fact, they won their first five major meetings with Northern Ireland in a row, and the rot was only stopped by a 0-0 draw in qualifying for the 1986 World Cup – that was an English side manged by Bobby Robson with the likes of Glenn Hoddle, Chris Waddle and Gary Lineker in the starting eleven.

Incredibly, Northern Ireland’s only major victory over England came the last time the two sides met – that was a 1-0 triumph for the Irish in World Cup qualifying back in 2005. David Healy cemented his place in Irish folklore courtesy of his 73rd minute goal that night in Belfast.

Regular foes in friendlies and Home Championship games dating back to 1876, Scotland won their first 13 games in a row against Wales – and it took the Welsh 30 meetings before they registered their first victory against the Scots.

We have ten games between the pair that meet our ‘significant’ criteria, as you can see, this is a much closer rivalry than some of the other home nations games, with Scotland just getting their noses in front with one extra win. 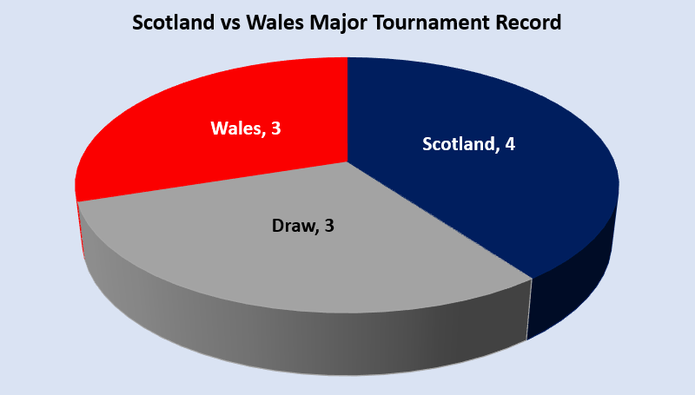 However, it’s notable that the Scots were the better team in days of yore – in more recent times, the Welsh have come to the fore.

Indeed, Wales beat Scotland twice in qualifying for the World Cup in 2014 – that man Bale netting twice in a 2-1 victory in 2012, and that scoreline was repeated a year later with Aaron Ramsey and Hal Robson-Kanu wiping out Grant Hanley’s opener.

There has only been 36 competitive meetings between these old Celtic rivals, and just four of them have come within the parameters we have identified. It’s honours even between Scotland and Northern Ireland, and given the scarcity we can go through each encounter in turn. 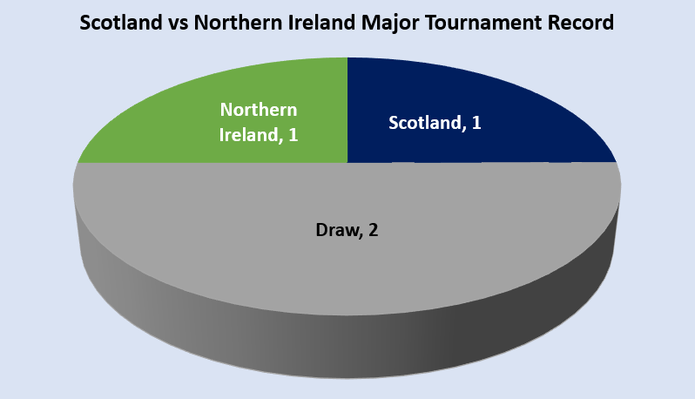 The first pair of contests came in qualifying for the European Championship of 1968. Scotland won the first at Hampden Park courtesy of goals from the two Bobby’s – Murdoch and Lennox. The second saw Northern Ireland gain revenge eleven months later, with David Clements’ second-half goal sending Windsor Park into raptures.

There have been 35 meetings between Wales and Northern Ireland – the vast majority coming in the British Home Championship.

Of those clashes that have taken place in a major event, it’s the Welsh that have had the upper hand. Northern Ireland have never beaten Wales in a World Cup, European Championship or qualification match. 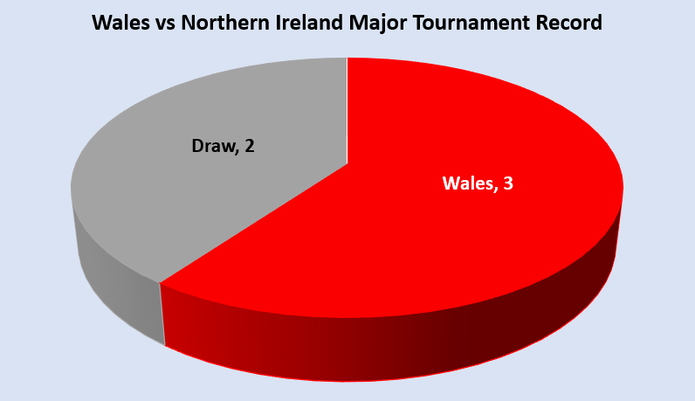 After a 0-0 draw in qualifying for the Euros in 1968, Wales won the return meeting 2-0 at Wrexham’s Racecourse Ground courtesy of strikes from Wyn Davies and Ronnie Rees.

They didn’t meet again in a major game for the best part of four decades – qualifying for the 2006 World Cup, to be precise. And they played out an entertaining pair of fixtures, with the first ending 2-2 at the Millennium Stadium before the Welsh prevailed 3-2 in Belfast thanks to a late goal from Ryan Giggs.

They last met at Euro 2016, with Gareth McAuley’s own goal enough for Wales to clinch a 1-0 triumph.

What About the Republic of Ireland? 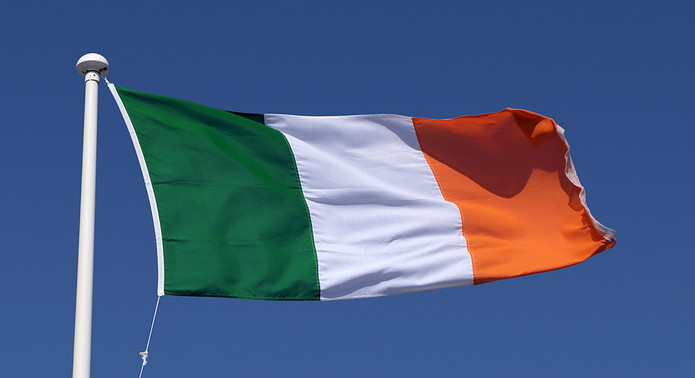 While not classed as a ‘home’ nation given their non United Kingdom status, the Republic of Ireland still has a long and storied footballing history.

Rep. of Ireland vs the Home Nations

Political tensions and fears of potential terrorist activity from the IRA have meant that the Irish and England have met just 17 times in all competitions in more than a century, while other major games against the other home nations have been sparse too.

Stalemate has largely been the order of the day when the Irish meet their old foe, and that shows just how much those from the Emerald Isle want to get one over on their counterparts from across the water.

Arguably the most famous contest between the pair came at the 1990 World Cup, when Lineker’s early goal for England was cancelled out by Kevin Sheedy – the Irish fans danced long into the night after that one.

The Scots have had their way with their fellow Celts, although it should be noted that two of those victories came way back in qualifying for the 1962 World Cup. Recently, they met in qualification for Euro 2016, with the two games ending 1-1 and 1-0 to Scotland.

The Republic of Ireland and Wales didn’t even meet in a competitive game until 2007, when the Irish prevailed 1-0 in a qualifier for the Euros the following year. The Welsh have only managed to score in one of their four games against them.

It would be fair to say that the two sides of the Irish border are not exactly the best of buddies, and that’s why they have played so few times against one another.

However, there have been eight significant meetings over time, with the Republic enjoying the upper hand. They are still to meet in a final World Cup or European Championship game.

What Was the British Home Championship? 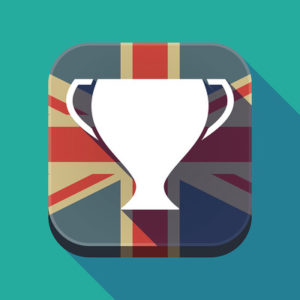 This was, quite simply, an annual tournament played between the four home nations – England, Scotland, Wales and Ireland (it became Northern Ireland in the 1950s after the dissolution of the single state).

It remains the oldest international tournament in the history of football, although fears of hooliganism and violence saw it brought to an end in 1984 after more than a century of competition.

England were the most decorated team in British Home Championship history with 54 wins (34 outright, 20 shared), while Northern Ireland won the last edition in 1983/84 – one of only three victories in the event.

Previous Post: « Could 2023 Be The First Five Day Cheltenham Festival?
Next Post: Transgender Athletes at the 2020 Olympics: What Are the Rules? »