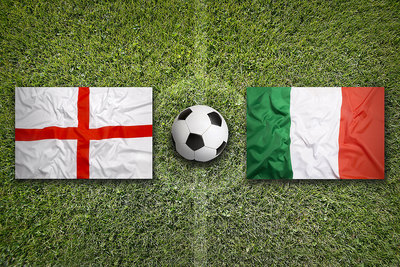 So here we are: just two teams remain in the hunt for the title of European champions.

England and Italy will contest the Euro 2020 final on Sunday, and they booked their places in the Wembley showpiece in equally fraught semi-final encounters.

The Italians took the lead against Spain, but were pegged back by a late Alvaro Morata equaliser. After 120 minutes the sides could not be separated, but Italy showed their mettle in the penalty shootout to book their place in the final.

As for England, well, life never seems to be straightforward in major tournaments. They went a goal down against Denmark – an outstanding free kick from Mikkel Damsgaard, which was the first the Three Lions had conceded all competition long.

But the equaliser would come when Simon Kjaer put through his own goal after fine work from Bukayo Saka, and after dominating the rest of the contest England, finally, settled their supporters’ nerves when Harry Kane scored the rebound after being awarded a dubious penalty.

That sets the scene perfectly for the final, and the bookmakers can’t split them – England are slight favourites, owing to home advantage, but all three results are a distinct possibility according to the bookies.

The historical head-to-heads are interesting. The two nations have been relatively well matched in their meetings before, however on the biggest stages it’s Italy that have tended to have the upper hand. 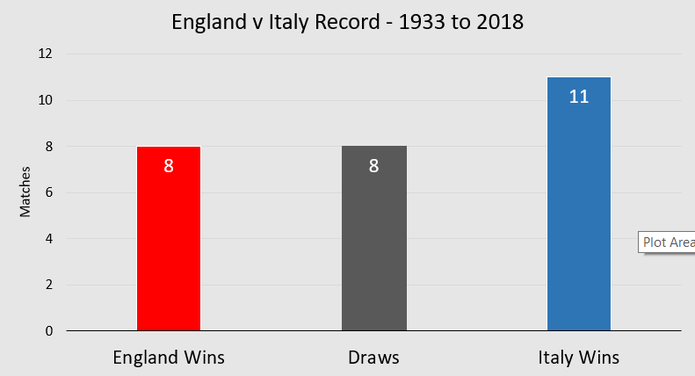 There have been 27 meetings between England and Italy, dating back the best part of a century.

They played exclusively in friendlies for the next 30 years, and it was here that England had the bulk of their success against the Azzurri, with four wins and four draws in those opening eight meetings.

From the 1970s to the present day, the two sides began to meet in formal competition too, with clashes in the World Cup, the European Championships and short-lived tournaments like the Tournoi de France.

And the news….well, it’s not great news as far as England fans are concerned. Since 1970, Italy have won eleven games against England, with four draws and four English victories. 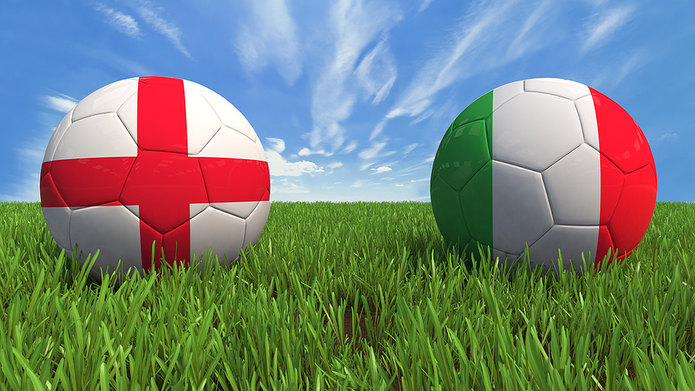 The first time that England and Italy met in a game of any real consequence was in qualifying for the World Cup in 1978. The Italians won the home leg 2-0 in Rome, before England replied at Wembley by the same scoreline – Kevin Keegan and Trevor Brooking netting for the Three Lions.

The next big clash came at the European Championships of 1980. The Italians were on home soil, and after both sides drew their opening group encounters it was essential that they defeated the other next time out.

Sadly for England fans, it was the Italians that prevailed thanks to Marco Tardelli’s late goal in Turin.

It would be a decade before they would meet again in meaningful competition. That came again on Italian soil in World Cup 1990, and in fairness it was something of a dead rubber game back in the days when there would be a third/fourth place play-off at the majors.

England, who had lost on penalties against Germany in the semi-final, didn’t particularly look all that interested, and Italy – cheered on by a sizable 51,000 home fans – won 2-1 thanks to goals from a very young Roberto Baggio and the star of the tournament, Salvatore Schillaci.

There were two meetings in 1997 as part of the qualification process for World Cup ’98, with Italy winning 1-0 and the second ending in a 0-0 stalemate.

Next up was Euro 2012, and the stakes were certainly high – a place in the semi-finals was up for grabs.

A fraught encounter ended 0-0, and after a nervy period of extra time it was penalties that would decide the outcome in Kiev. When Riccardo Montolivo missed, the Three Lions must have sensed an opportunity, but misses from Ashleys Cole and Young meant that England’s nightmare run in penalty shootouts continued.

Their most recent big tournament game came at the World Cup in 2014. There, Italy took the lead through Claudio Marchisio, with Daniel Sturridge equalising barely 90 seconds later.

But Mario Balotelli – why always him? – netted early in the second period, and England were all but dumped out of the competition.

It’s been 55 years since England last got their hands on a major trophy.

That was the World Cup of 1996 – who could forget?, but since then it’s been a long old drought for the Three Lions. Could Euro 2020 finally bring an end to the hoodoo?

This effort is their best ever in the European Championships, but Italy have previous in this competition. They won the old-style format back in 1968, and since then they have lost twice in the final – losing out to France in 2000 and Spain in 2012.

The World Cup has actually been a happier hunting ground for the Italians. They lifted the Jules Rimet on consecutive occasions in 1934 and ’38, defeating Czechoslovakia and Hungary respectively in those finals.

Their third World Cup win came in 1982, where they beat West Germany on Spanish soil, and then in 2006 they visited German soil and came home with the trophy – this time taking out France.

There’s no doubt about it: Italy have much more major tournament experience than England. But will it count for anything in the final of Euro 2020?

Previous Post: « Where to Watch Horse Racing on TV in the UK
Next Post: England Penalty Shootouts: The European Championship and World Cup Record of the Three Lions »