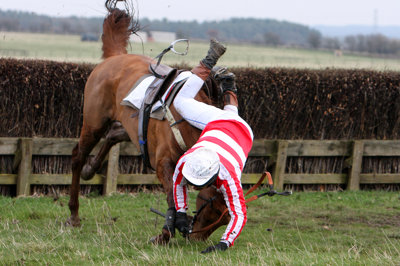 It would be interesting to hook punters up to ECG monitors in the middle of a National Hunt meeting. For those whose punts are in the clear approaching the final fence, there must be a brief moment where the reading goes off the charts.

Of course, in the vast majority of cases, the horse in question will get up and over successfully, going on to win the race or perhaps getting caught in the final few furlongs by a fleeter-footed (hooved?) rival.

But when a leader falls at the last….it’s a remarkable, heart-stopping moment, and at the November Meeting at Cheltenham we witnessed the extraordinary sight of the winner-in-waiting of a two-horse race hitting the deck in the final throes.

That ‘honour’ went to My Drogo, who had asserted dominance as you would expect from the 4/9 favourite. But at the penultimate fence, Harry Skelton’s mount stumbled after landing and unseated his jockey.

The confusion seemed to unsettle Gin On Lime, ridden by Rachael Blackmore, and she hit the deck too, but the Irish rider clung on and was able to get her mount back up and running.

There was even time for the Benny Hill-esque sight of Skelton chasing after My Drogo on foot to try and re-mount, but it was too late and Blackmore had a clear run to the line.

In a two-runner race, My Drogo falls two out and Gin On Lime is on her knees, only to get back up under @rachaelblackmor and take victory!pic.twitter.com/KddTzyqWDg

It might not have been a final fence shocker, but there can’t have been many times that a two-horse race ended in such strange fashion – not good for those who had backed My Drogo at an odds-on price.

Anyway, now seems as good a time as any to revisit some of the most disastrous final flight moments in racing history.

It’s fair to say Her Majesty was not amused….

The Royal Family has a long history of success in horse racing, and the Queen Mother owned her fair of quality operators through the years.

But, sadly, one of her best known – Devon Loch – is best remembered for what he didn’t do, rather than what he did.

A regular winner on the National Hunt circuit, Devon Loch found himself clear of the field at the Grand National in 1956. He entered the final straight in decent fashion, and then things took a bizarre turn for the worse when the horse inexplicably leapt into the air – despite there being no fence to jump.

Devon Loch landed heavily on the turf after his phantom jump, and jockey Dick Francis was unable to rise his horse quick enough to catch E.S.B, who went on to complete victory in the most surprising fashion.

The name Devon Loch has become a sporting metaphor for throwing away a handsome lead with the finishing line approaching, and unfortunately the horse will be forever immortalised for that mysterious ending.

It’s the final fence fall that saved the bookies an estimated £50 million.

The legendary Ruby Walsh and Cheltenham Festival specialist Willie Mullins had already completed a hat-trick of wins courtesy of Douvan, Un De Sceaux and Faugheen on an unforgettable day renamed ‘Ruby Tuesday’ back in 2015.

And punters were licking their lips at the prospect of a Walsh-Mullins four-timer with Annie Power odds-on to clinch victory in the Mares’ Hurdle. It was all going to plan too, with the Irish favourite five lengths clear heading towards the final flight.

But you can probably guess what happened next. Annie Power crashed through the top of the fence and went down – the roar that went up from the punters at trackside confirming just how popular a winner this would have been.

The advent of in-play betting and the exchanges has only served to ramp up the anguish suffered by punters after a final fence fall.

During the Triumph Hurdle of 2020, Goshen traded as short as 1.04 – that’s 1/25 on – after bursting clear. Those wanting to snipe some easy money were backing in their thousands….they were soon to learn the hard way the perils of in-running betting.

But unlike Devon Loch and Annie Power, Goshen had an unassailable lead – some 12 lengths, to be exact, and travelling nicely.

However, horse racing is an unpredictable sport – the history books teach us that – and as Jamie Moore asked for one last effort, Goshen did not respond and instead spectacularly fell….giving the jockey no chance to re-mount.

There were howls of anguish from the stands, but none as loud you suspect as that of Steve Packham, for whom Goshen was his first Cheltenham Festival runner as an owner. “It’s one of those things, it’s jump racing, unfortunately,” he said afterwards with admirable pragmatism. “He’s not the first horse to fall or unseat at the final jump at Cheltenham, and he won’t be the last.”

Previous Post: « On the Road: What Has Happened to Away Kits in Football?
Next Post: Is Brexit Killing UK Horse Racing? »