The rules banning players, coaches and staff from betting on football matches in Europe and beyond also extend to the American version of football too.

And so that’s why Calvin Ridley, the wide receiver for beaten Super Bowl LI finalists Atlanta Falcons, has been banned for at least one year for a number of betting-related offences.

The NFL has confirmed that Ridley had a flutter on at least five matches during November 2021, and while he personally wasn’t involved in any of them it is still a breach of the rules for a professional player to wager on the outcome of NFL matches.

Ridley took to Twitter to explain himself and admitted betting $1,500 on the games, before questioning the length of his punishment compared to less severe bans dished out to players for more serious offences – Ezekiel Elliott was banned for just six games in 2017 despite being accused of domestic abuse.

It later emerged that Ridley had bet on his Falcons teammates to win as part of a series of accas and parlay bets, and NFL Commissioner Roger Goodell commented that the 27-year-old had failed in his ‘responsibility’ to the competition.

“There is nothing more fundamental to the NFL’s success – and to the reputation of everyone associated with our league – than upholding the integrity of the game,” he said.

“Your actions put the integrity of the game at risk, threatened to damage public confidence in professional football, and potentially undermined the reputations of your fellow players throughout the NFL.”

Are NFL Players Allowed to Bet on Games? 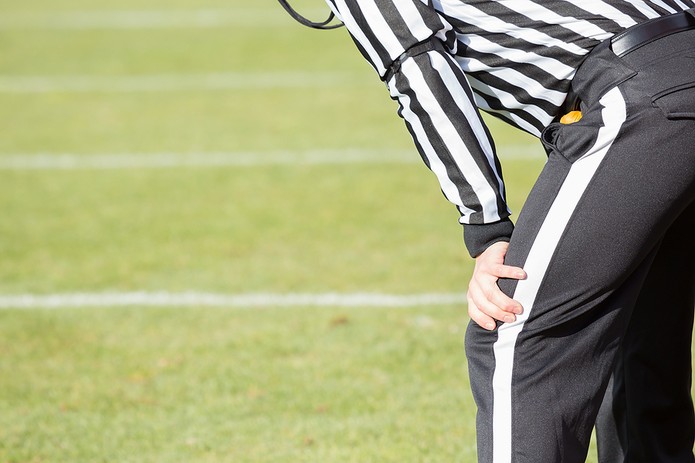 Addressing Ridley directly in an open letter posted on the NFL website, Goodell wrote that gambling on the competition’s matches has been considered one of the ‘most significant violations of league policy’ in recent years, and a ‘crime’ befitting of the ‘most substantial sanction’.

The NFL rulebook confirms that all personnel contracted to an active franchise are banned from betting on games – even if gambling is legal in the particular state in question.

‘All NFL personnel are prohibited from placing, soliciting, or facilitating any bet, whether directly or indirectly through a third-party, on any NFL game, practice or other event’ is the official line.

The regulation confirms that the range of punishment available to NFL officials in these cases can be severe. A lifetime ban is available to enforcers, as is the termination of employment, suspensions and fines, depending on how sizable the offender’s breaches are.

Goodell accepted that Ridley had not utilised inside information in his bets, and because no other players, coaches or staff were aware of his actions the competition was not ‘compromised’ in any way – hence why his punishment was less severe relative to the scale of the sanctions that are available.

One of the issues facing the NFL, and North America’s other elite sporting competitions, is that sports betting has been largely illegal in the US for decades. But a 2018 law change allows individual states to legalised gambling if they see fit, and already the likes of New York, Michigan and Arizona have joined 27 others in launching legal sports betting.

Could this be the first of many similar cases for the NFL to deal with?

Which NFL Players Have Been Banned for Betting Offences?

Since the overturning of the previous legislation at the US Supreme Court, two NFL stars have been found guilty of betting on the competition’s games.

Ridley joins former Arizona Cardinals defensive back Josh Shaw on the roll of dishonour. He was banned indefinitely after it emerged that he had wagered on a ‘low four figure’ three-team parlay in November 2019 that saw him bet against his Cardinals teammates.

In the end, Shaw’s suspension lasted the best part of 18 months, until the NFL decided to allow his reinstatement in March 2021. Since then, he has failed to earn another professional contract.

Incredibly, Shaw was the first player to be sanctioned for betting since the 1980s. The previous offender was Art Schlichter, who admitted losing nearly $500,000 while gambling on basketball games in a six-month period between 1982-83. Initially banned indefinitely, the quarterback’s suspension was reduced to 13 months after he gave evidence to an FBI investigation about bookmaker extortion.

The previous two instances of gambling breaches in the NFL both came during the 1960s. Alex Karras was a seriously talented player who would latterly be inducted into the Football Hall of Fame, but his career briefly ran aground in 1963 when he was banned for a season for admitting placing ‘half a dozen’ bets on the outcome of games.

So seriously did Karras take his suspension that, after being reinstated in 1964, he refused to call a pre-game coin toss, telling the referee that he ‘wasn’t allowed to gamble.’

That same year, Paul Hornrug – a winner of the first ever Super Bowl who was described by Vince Lombardi as ‘the best player I ever coached’ – also fell foul of the NFL’s gambling rules.

He was banned in 1963 for betting on NFL games and ‘associating with undesirable persons’, although he was able to return to the sport a year later and win three more league titles with the New Orleans Saints and Green Bay Packers.

Previous Post: « Are British Trainers and Owners Giving In to Irish Dominance at the Cheltenham Festival?
Next Post: Boxing’s Most Controversial Points Decisions: Is the Sport Corrupt? »