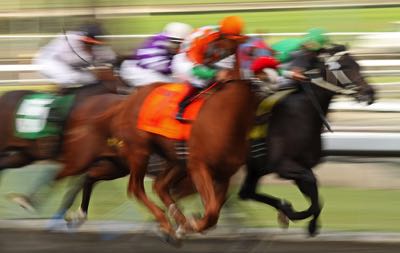 Sport has an ability to write stories that are amazing and often scarcely believable. And, so it came to pass that Sam Waley-Cohen, after 23 years in the saddle and, in his final ever race, won the Grand National aboard the 50/1 shot Noble Yeats.

In doing so, he became just the fourth amateur jockey to prevail in the National since the Second World War, and the first from the non-paid ranks to secure the Cheltenham Gold Cup and Grand National double.

In a thrilling finale, Noble Yeats just had the legs to see off the bookmakers’ favourite, Any Second Now, and became the first seven-year-old in more than eight decades to take top spot. It was a day of history-making all-round then, and one that rendered the usually-chatty Waley-Cohen almost speechless.

It’s a dream! It won’t sink in for weeks – it feels like a fantasy, and I just don’t know what to say. We came here thinking, well, you know, the sun’s out, it’s my last ride, go and have a nice day with no instructions, no expectations, just enjoy.

And, enjoy it he did, although there was an air of sadness about the day as the Waley-Cohen family – father Robert owns Noble Yeats amongst other horses – commemorated the loss of Thomas, the younger brother of Sam who died of cancer in 2004 aged just 20. He said,

These days are big family days, and obviously Thomas isn’t with us, so you always think about him on these days. I still always ride with his initials on my saddle. I do think he is sitting on my back.

Congratulations from the Duchess of Cambridge

Big names from the world of racing and beyond were quick to congratulate Waley-Cohen on his win and an extraordinary career – including the Duchess of Cambridge, who is an old school friend of the jockey.

Huge congratulations to @swaleycohen for winning the Grand National. What a way to retire!

— The Duke and Duchess of Cambridge (@KensingtonRoyal) April 9, 2022

All of which brings the curtain down on the career of one of the most decorated amateur jockeys in the history of racing….

There will be times when any jockey has to grit their teeth and dig in, and Sam Waley-Cohen is better placed than most to do exactly that. One of the reasons he retained his amateur status as a jockey is down to the success of his work as a dentist. He started the Portman Dentalcare chain from scratch in 2009, and has since grown to more than 160 practices across the UK and Europe – serving more than one million people.

One of his newest customers is Mick Molloy, a stable lad at the Warwickshire yard of Robert, whose gap-toothed grin Waley-Cohen promised to fix if he won at Aintree. “When I got on the horse in the paddock, Mick smiled at me and there was a big gap where one of his teeth was missing. He said ‘if he wins, you’ll fix my tooth, won’t you?’” the jockey confirmed.

Given his amateur status, Waley-Cohen won’t have the luxury of the £500,000 winner’s cheque to pay for it. “I’ve got to get him [Molloy] an implant now, so I’m the only person riding in Saturday’s race who has come out of it poorer than when he started it!” Waley-Cohen signed off on his career just a week shy of 40th birthday, although his riding career began at the turn of the new millennium. By 2007, he was earning rides in the most prestigious races – a run to fifth on Liberthine in the Grand National showcasing his love of the Aintree track.

Took Only 30 Racing Jobs a Year

Juggling his entrepreneurial responsibilities with his riding, Waley-Cohen would usually only take 30 jobs in racing a year – but what an incredible CV he has built. He partnered Long Run to the Cheltenham Gold Cup (becoming the first amateur jockey in 30 years to win the Festival showpiece) and King George VI Chase in 2011, and also finished second (Oscar Time) and third twice in the Grand National aboard Synchronised and Bob’s Worth.

The King of Aintree

Waley-Cohen will go down in racing history for many different reasons, but his record at Aintree will surely take some beating. In 41 races at the Merseyside venue, he enjoyed seven wins – including that Grand National victory, of course. He won the Topham Chase aboard Liberthine and Rajdhani Express in 2006 and 2015 respectively, and also enjoyed triumphs in the Becher Chase and a three-timer in the Foxhunters’ Chase.

But it’s that National win that will live longest in the memory, with Waley-Cohen becoming the first amateur since Marcus Armytage on Mr Frisk way back in 1990 to prevail in the steeplechase. Given his record at Aintree, perhaps we shouldn’t have been too surprised….although the timing of it ensured a Hollywood-esque ending to a fine career.

Previous Post: « Can You Clone a Racehorse? And Would Cloned Horses Be Allowed to Race?
Next Post: Who is the Best England Cricket Captain Of All Time? »