Even the hardiest of World Cup fans are hard-pressed to defend the choice of Qatar as host for the 2022 edition.

This is a country with a questionable human rights record, that has knowingly endangered the lives of thousands of people in the creation of its big tournament infrastructure, and one that has forced FIFA to re-write the unwritten rule that the World Cup will not, and should not, take place in the northern hemisphere’s winter months.

One way in which the metaphorical chickens may come home to roost is in the attendance – or lack thereof – at the tournament’s games in the Gulf nation. As of June 2022, it has been reported that just 1.8 million tickets have been sold for the World Cup….that would make it just the eleventh best-attended edition of the tournament in history.

There’s still five months for that figure to be bumped up to closer to the three million target that FIFA had imposed, but that is looking increasingly out of reach – even with the huge discounts on ticket prices that have been given to Qataris already.

The ticket allocations are hardly helping matters. For example, England fans have been given just 2,489 tickets for their team’s opening game against Iran – despite the fact that the Khalifa Stadium in Doha has a capacity of more than 45,000.

And, after all, it’s unlikely that many supporters from the Western world will travel to Qatar purely for the ambience and local culture….

So, it’s fair to say that the 2022 World Cup will not be joining the ranks of the best-attended editions of the tournament. But which World Cup has saw more fans than any other attend its games?

There are two general measures for how well a World Cup is attended – the first is by the total number of tickets sold, and the second is how many fans attend each game on average.

For total attendance, here’s how the rankings stack up: 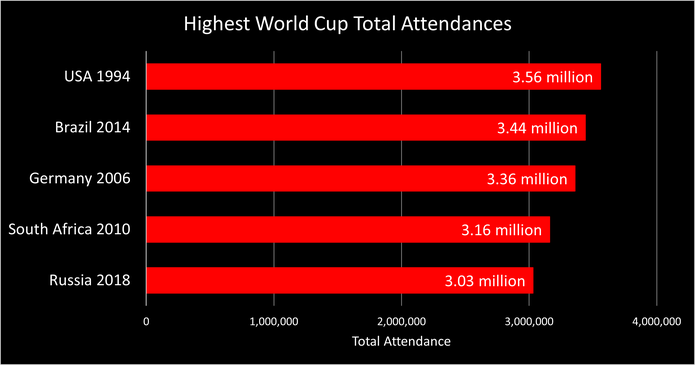 The best-attended World Cup in history is USA ’94, which saw a whopping 3.56 million tickets sold and stadiums at around 97.7% of full capacity.

What makes that all the more impressive is that there only 52 games played at that edition – as opposed to 64 since 1998 – and so the growing interest in ‘soccer’ at that time, plus the huge population of North America, contributed to huge attendance figures and what was a sublime tournament from start to finish.

Some 94,194 people packed into the Pasadena Rose Bowl to watch the final between Brazil and Italy in ’94, and that has been the highest single-game attendance at the World Cup in the subsequent three decades as well.

Otherwise, the most-attended World Cups have all been in the modern era – as already mentioned, that’s largely due to the fact that the tournament has expanded from 24 teams to 32 since 1998, and therefore there are simply more games to go and watch.

So we know that contemporary editions of the World Cup rank among the best for total attendance, but what about when fans-per-game is the measure? 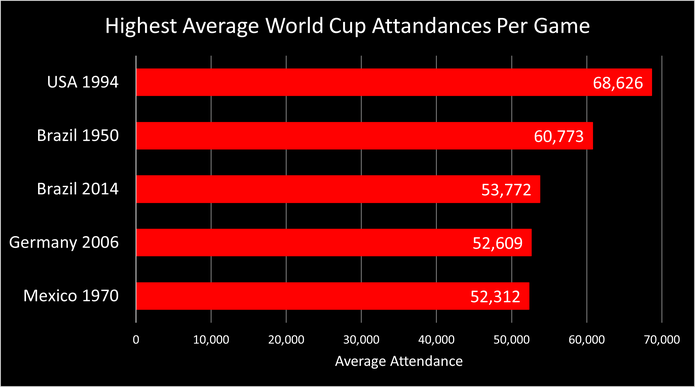 As you can see, the balance is redressed somewhat, and only two World Cups from the past 25 years actually feature amongst the best attended.

We’ve already written about USA ’94, and it’s interesting to note that Brazil features twice on the list as a host – in 1950, the Maracana, with fewer safety restrictions, welcomed an eye-popping 173,850 people for the final between the host nation and Uruguay.

Indeed, here are the attendance figures at the Maracana throughout the 1950 World Cup:

By 2014, half of the 12 host stadiums in Brazil had a capacity of 50,000 or higher – so although attendances tend to be lower, on average, in this era of seating over standing, Brazilian grounds are able to entertain a higher number of fans….seeing this edition rank as the second most-attended World Cup in history.