The sight of Zhou Guanyu’s Alfa Romeo crushed like a tin can at the 2022 British Grand Prix would send a shiver down even the hardest-hearted of observers.

The Chinese driver took the first bend of the Silverstone circuit at around 160mph, and the sheer velocity forced his vehicle to flip upside down and overturn, before skidding across the track, gravel and over the safety barrier, ending up wedged in front of the stand.

Amazingly, Zhou – who was conscious throughout – escaped unhurt from the crash, and after being checked over at a local hospital he was back at Silverstone just a matter of hours later.

It followed another heart-stopping collision in the F2 race on the same circuit, where Dennis Hauger’s car also left the ground and ended up landing on top of Roy Nissany – happily, that duo also went unscathed.

It’s the third major incident at Silverstone in the past two years, with Lewis Hamilton and Max Verstappen colliding at the famously fast Copse turn in 2021 – the Dutchman came off significantly worse, and all told was pretty lucky to walk away with barely a scratch on him.

Some crashes in Formula One are caused by driver error – there’s absolutely no doubt about that, and by trying to find every inch of speed and marginal gain they can, some push the limits a little too far.

But the nature of the circuit also plays a part, and with another couple of high-profile incidents at the track, the question remains: is Silverstone now amongst the most dangerous F1 venues in the sport?

What is the Most Dangerous Formula One Track?

Ordinarily, we might pull up a whole bunch of stats for each racetrack and use them to tell us how dangerous they are.

But in this case, the numbers don’t always tell the whole story, because some crashes are caused by driver error, bad weather or just downright bad luck.

Generally, of the ‘classic’ F1 tracks, Monza would surely be considered amongst the most dangerous. It first hosted races in 1949, and the issue is that the cars are so much faster these days – with almost entirely different physics – that the nature of the track simply cannot cope with the speed.

There have been many fatal crashes at Monza, with drivers and safety staff sadly losing their lives, and of the ‘purpose built’ F1 tracks this is certainly amongst the more dangerous.

They often don’t have the run-off areas and other safety features of venues designed to host high speed racing, and tracks like Monaco are so tight that navigating them at lightning pace is difficult for even the most skilled of drivers.

The Marina Bay circuit in Singapore is considered to be one of the street tracks most fraught with danger, with bumpy surfaces, high kerbs and often stifling temperatures combining to create a dizzying drive for even the best in the business.

Of the newer tracks, Saudi Arabia’s Jeddah Corniche is certainly not amongst the favourite of many drivers.

It was here that Mick Schumacher had a horror smash back in March, hitting a concrete barrier at 170mph after trying to take the tight Turn 10 – his Haas car actually breaking into two from the impact.

Nicholas Latifi also had a big crash here in 2022, and Sebastian Perez was moved to describe Jeddah as ‘the most dangerous place in the calendar.’

Of the old school, Spa – home of the Belgian Grand Prix – is also considered to be amongst the most dangerous.

One of the fastest circuits in Formula One, Spa is actually built from an old road course – we’re talking city and town centre streets. There’s elevation changes and some near-blind turns, and there have been more than 50 deaths at the track during competitive racing.

What is the Fastest Formula One Track?

It’s perhaps no coincidence that a number of the tracks we have listed as being amongst the most dangerous are also among the fastest, too. 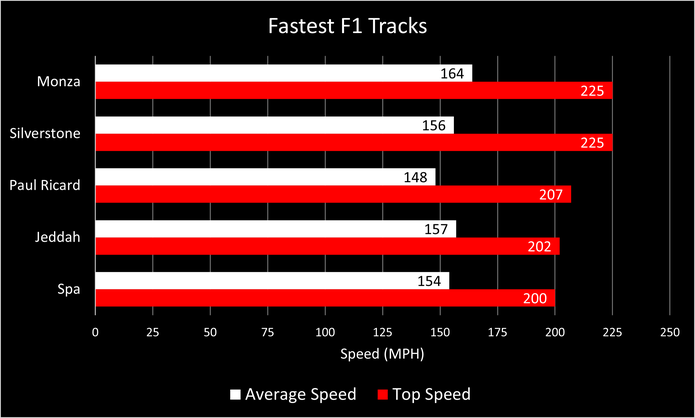 Monza takes the top spot as the fastest Formula One circuit as far as average speed is concerned, with Silverstone also in the higher echelons thanks to a top speed of a hair-raising 225mph.

Jeddah and Spa also feature on the most dangerous and fastest list, while credit should go to the designers and officials at Circuit Paul Ricard in Le Castellet, France. They have managed to combine high speed with a more than respectable safety record.