Many of us that have played sport for our local teams will be familiar with the fines list.

A raft of penalties will be drawn up for ‘crimes’ as diverse as being late to not wearing flip-flops in the shower, with all monies raised going into the pot for the end-of-season festivities.

It’s heart-warming to know that even elite-level, professional sports teams have kept the fines tradition alive and well, although the eye-popping amounts charged at Aston Villa would ensure you are on your best behaviour at all times.

A leaked photo shows the list of sanctions and their associated fines at the West Midlands club, although Villa representatives have since claimed the charge sheet was from the previous regime under Dean Smith as opposed to the present reign of Steven Gerrard. 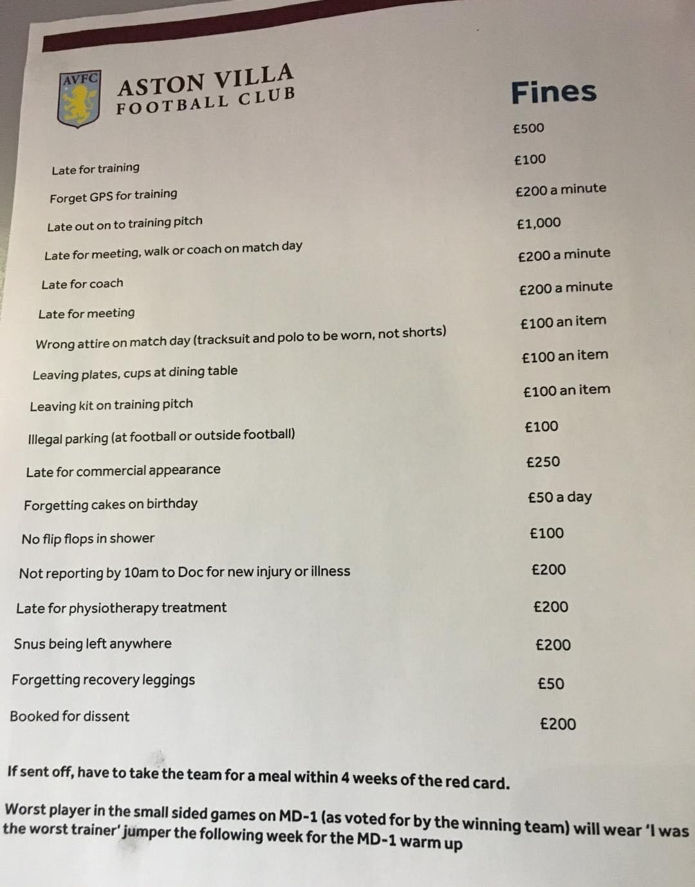 Of all the punishments, being late for training is the one best avoided. There’s a flat rate fine of £500, plus a staggering £200 per minute thereafter that the player is late entering the training pitch – that’s a double alarm clock job if ever there was one.

There was a £1,000 fine for being late for matchday engagements, and anyone late for a meeting or for the coach to an away game was hit with that £200 per minute fine too.

A catalogue of other fines, including leaving plates and crockery on the dining table (£100 per item) and forgetting birthday cakes (£50 per day), highlights just how tough the Villa boys had it.

Fines lists at other clubs have been leaked in the past too, so how does the Aston Villa regime of terror compare to other sanctions metered out up and down the football pyramid?

Known as a highly professional and slick player back in the day, Frank Lampard expects the same high standards from his players now after making the move into coaching.

During his time in the Chelsea hotseat, Lampard introduced a fines list of his own that was designed to help keep the feet of his mega-rich stars firmly on the ground.

And he was just as harsh as Smith when it comes to lateness – his Chelsea stars fined a knee-trembling £20,000 if they were late onto the training pitch. 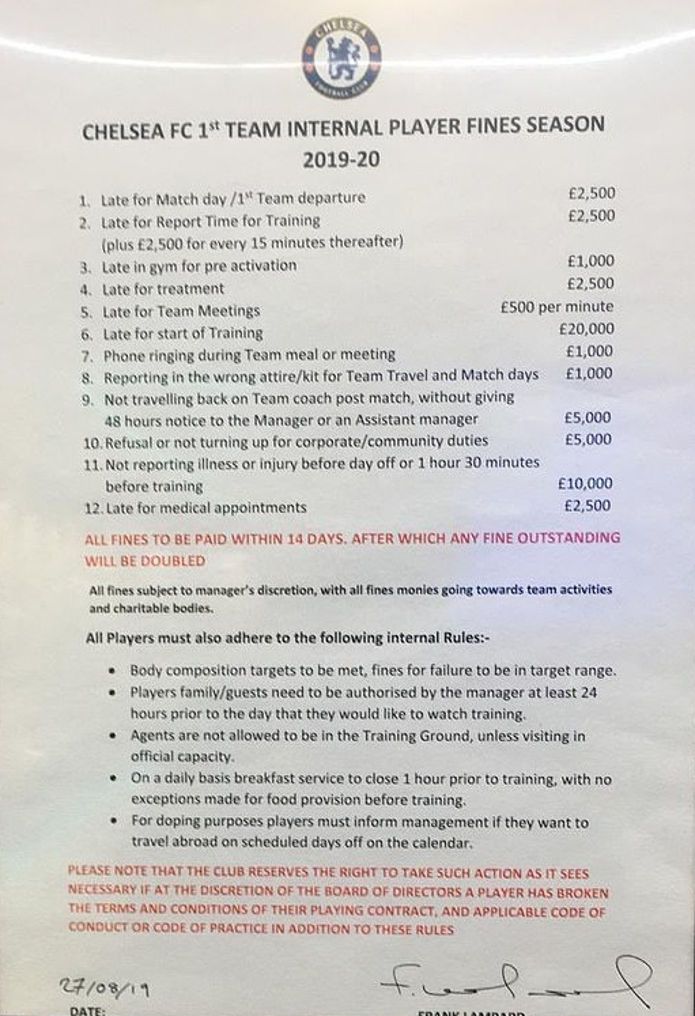 Late for a team meeting? That’ll be £500 per minute please (ouch). Late for a medical appointment or to board the team bus? Cough up £2,500.

You’ll be fined £1,000 for your phone ringing during a team meal or meeting on Lampard’s watch, the same amount for wearing the wrong attire at training or on a matchday, and it’ll cost you £5,000 if you don’t take the team bus home from an away game without a prior agreement from Lamps and his coaching team.

As if that wasn’t all enough, all fines would be doubled if not settled within 14 days. No wonder many in the Blues camp were happy to see the back of Lampard when he was given the boot from Stamford Bridge….

It’s off to the lower leagues we go now, with a stop-off at League Two outfit Walsall.

Like Chelsea and Aston Villa, their unique fines list found its way onto the internet, and while the crimes charged for are similar, the amounts that offending parties were forced to pay was rather more amenable. 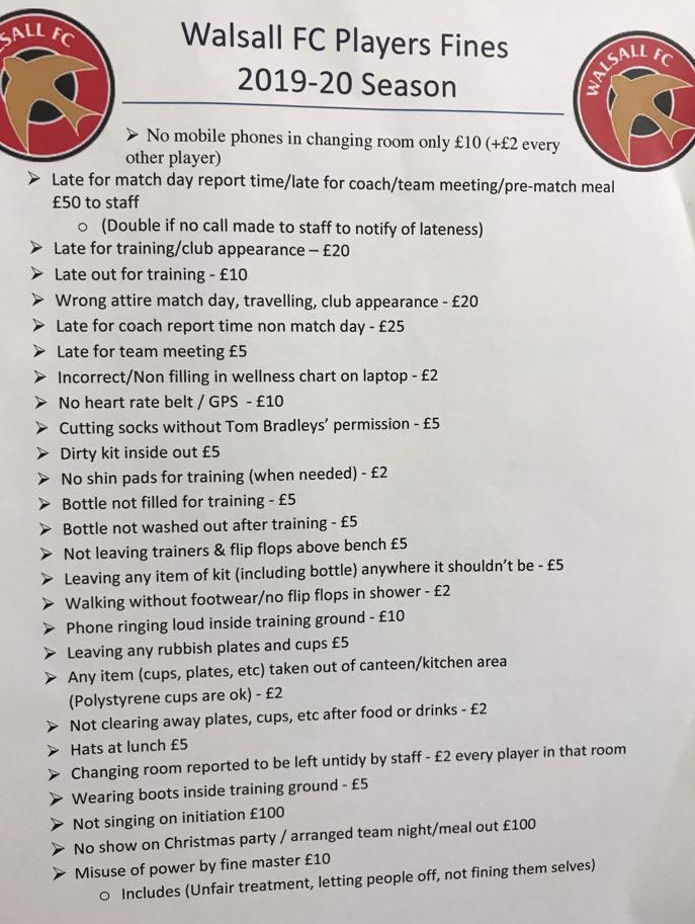 And then the list takes a turn that many Sunday League players will be familiar with – cutting socks without permission (£5), dirty kit (£5), forgotten shin pads (£2) and no flip-flops for the showers (£2) all the banes of the amateurs, and clearly the professionals, life. 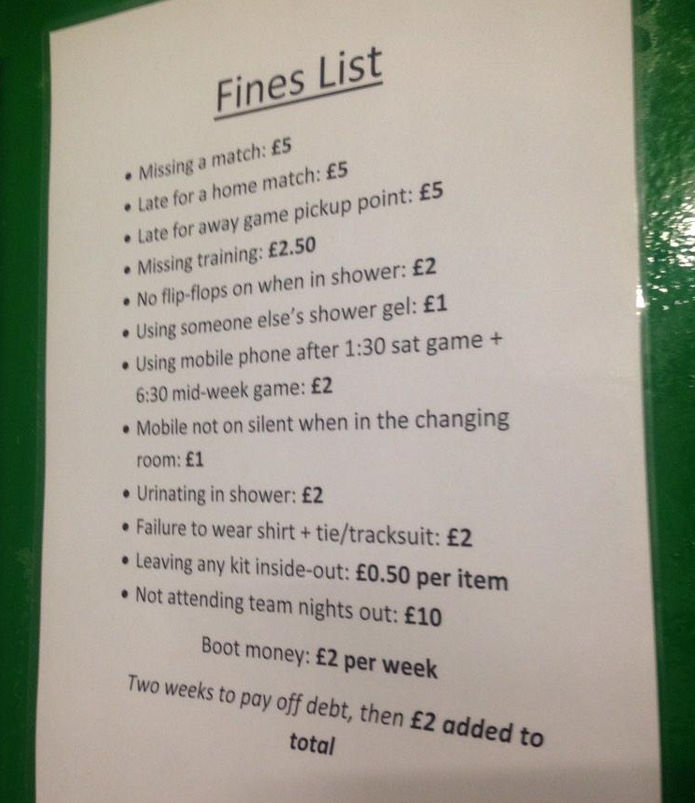 The ethos of non-league football is that the standards of professionalism should be in place even if the wages are not.

At Blyth Spartans, they were tough on their players back in the 2014/15 season, despite many of them being part-timers or having day jobs to go to.

Lateness was not tolerated with a £5 fine dished out on matchday or for training, while not attending team nights out was greeted with a £10 charge.

Other, rather more humble fines, include the £1 for using somebody else’s shower gel, £1 for mobiles not being on silent and £2 for, ahem, urinating in the shower.

These fines generally stay in house, although Blyth came a-cropper when the BBC raided the home changing rooms when they hosted Birmingham City in an FA Cup third round tie back in 2015….