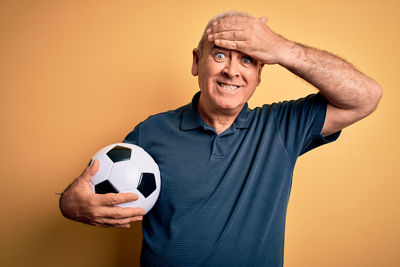 When you commit to naming the stands at your home ground after your sponsors, there is the potential for things to take a turn for the worse.

At Southend United, they’ve opted for a common trope in stadium naming – take the name of your main sponsors, and then add ‘north, south, east or west’ to the end.

So visitors to Roots Hall can take their seats in the snappily-named Jonathan Rhys Recruitment South Stand, MidExPRO East Stand or the Solopress North Stand.

The Shrimpers were then left to name their West Stand, and happily for them local estate agents Gilbert & Rose were willing to invest in the club to secure the rights.

And so the Gilbert & Rose West Stand was born….Rose West being a mass murderer in the 1970s and ‘80s, for the uninitiated.

Southend United have sold the naming rights for their West Stand to the local estate agents Gilbert & Rose.

I don’t think they thought this one through…

Although it’s remarkable that the faux pas made its way past the eyes and minds of Southend’s marketing team, the issue has already been addressed – a change to the Gilbert & Rose Stand, G&R West Stand or West Stand sponsored by Gilbert & Rose is, thankfully, likely.

At the time of writing, no comment had been issued by a representative of the club – they were probably all too busy wringing their hands and burying their head in the sand to get their words out.

Of course, in the name of transparency, they’re not the only professional sports club to have a branding nightmare over the years….

The criticism of foreign owners that come in and buy sports teams is that they don’t understand the culture and tradition of their new acquisition.

That’s sometimes a little unfair, but in the case of Cardiff City owner Vincent Tan, the cap definitely fits.

Cardiff have played in a blue kit for the best part of a century – their nickname is the Bluebirds, after all. But Tan, well, he didn’t much care for that.

And so he declared that Cardiff would play in red shirts for the 2012/13 campaign, and even changed the design of the badge so that the famous ‘bluebird’ was dropped in favour of a dragon.

Tan claimed that the rebrand was to establish Cardiff as Wales’ number one team, but he would later admit it was because red was his lucky colour – and the dragon a symbol of power and strength in Asian culture.

Eventually, Tan would see sense and restore Cardiff City to their blue kits and Bluebird branding, but in many ways the danger of lunk-headed sporting re-brands had already been done.

What do you do when you’re struggling to put bums on seats at your home matches?

Well, you run a promotion to sell pints of beer for 10 cents apiece – even by today’s exchange rate, that would still be around 50p a go.

The marketing team of the Cleveland Indians had good intentions, of course, but it doesn’t take a genius how such a deal is going to pan out – especially as the Indians’ last game against the Texas Rangers had ended in a mass brawl amongst players and coaching staff.

The Cleveland Stadium played host to thousands of booze-addled ‘fans’, many of whom had probably never seen a baseball game in their lives before. It didn’t take long before supporters began to streak on the outfield, let off firecrackers and smoke marijuana in plain view.

Towards the end of the game, a mass pitch invasion saw the players of both teams have to protect themselves from the marauding horde with bats, and Cleveland were later forced to forfeit the game after it was judged they were liable for the subsequent abandonment.

Often if an idea seems too good to be true, it usually is.

A sports team changing their name often brings about a change in branding, too.

So when NBA franchise New Orleans Hornets changed their name to the Pelicans, out went their old waspish brand and cuddly Hugo the Hornet mascot to be replaced by a sleek new look.

Except….this wasn’t any old rebrand, and this wasn’t any ordinary mascot either. Pierre the Pelican was like something out of a Stephen King novel, complete with cold, dead eyes and a hellish red mouth.

The only Halloween costume I would wear at this point is scary Pierre the Pelican. pic.twitter.com/pnv5hoLQ5Y

Young fans of the team were so terrified that some parents reported that they couldn’t persuade their youngsters to attend Pelicans games anymore, and so halfway through the 2013-14 season Pierre was given a facelift to become more child-friendly than child-catcher.

San Jose Earthquakes Throw Sensitivity Out of the Window

There is some disagreement as to how the name San Jose Earthquakes came about – some claim that the MLS franchise’s former general manager, Dick Berg, came up with it, others say a supporters group was responsible.

It’s a somewhat inconsiderate piece of branding – the San Francisco Bay Area sits on the San Andreas and six other fault lines, resulting in hundreds of mini earthquakes and tremors in the vicinity each year.

Although the death count tends to be pretty low given the small stature of the ground shifts, some have been fatal – the 1952 Kern County earthquake saw 12 people killed and around $60 million in damages to property….a monumental amount of money 70 years ago.

San Jose’s soccer team have been called Clash and Sharks at various points, and so the switch to Earthquakes seems ill-advised given the devastation that such tremors have caused the local population.

It seems that sensitivity doesn’t run that deep in the marketing teams of MLS sides. Chicago Fire, for example, are named after the Great Chicago Fire of 1871 that killed more than 300 people!

Previous Post: « Aston Villa’s Leaked Fine List: How Does it Compare to Other Football Clubs?
Next Post: Goals Galore! What are the Highest Scoring Gameweeks in Football History? »