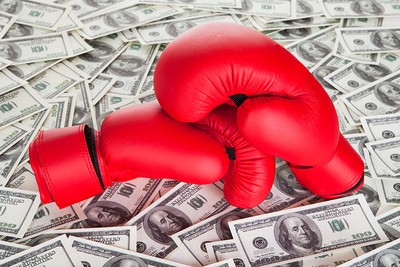 It’s been one of the most frustratingly delayed fights in British boxing.

A few years ago Tyson Fury versus Anthony Joshua would have been one of the biggest draws in the sport, but a pair of defeats for the latter against Ukrainian sensation Oleksandr Usyk have rather destabilized his career.

But redemption could be the watchword after the two fighters reportedly agreed terms for a fight on December 3, with victory over the Gypsy King putting AJ firmly back amongst the elite.

As for Fury, this could be a money-spinning tune-up fight for what will presumably be an undisputed heavyweight clash with Usyk in 2023.

Whichever way the bout goes, both men will come out of it considerably richer. While a venue is yet to be confirmed at the time of writing, the purse – which will reportedly be split 60-40 in Fury’s favour – could yet reach £75 million.

That, allied to ticket sales and PPV buys, could net both fighters at least £40 million, which is not bad for a night’s work – even when that endeavour means being punched in the face by a 250lb opponent.

But where would Fury vs Joshua rank amongst the biggest purses in boxing history?

There’s a nice symmetry here with Lennox Lewis, the last undisputed heavyweight champion who Fury (or Joshua) will look to emulate in 2023, earning a bumper payday for his 2002 entanglement with the ‘Baddest Man on the Planet’.

In truth, Mike Tyson’s best days were far behind him at this point, and Lewis enjoyed a comfortable evening’s work – handy given the unpredictability of Iron Mike.

The combined purse was around £140 million, and while plenty of that went to promoters and other hangers-on, both men made a handsome £40 million or more for their efforts.

Even though this heavyweight scrap took place some 25 years ago, it still makes the rundown of commanding one of the biggest purses in boxing history.

Tyson was always a big draw thanks to his power and unpredictability, while Evander Holyfield – more conservative and genteel – was no less fearsome in the ring.

The pair had locked horns a year earlier, with Tyson – the WBA champion and 1/25 favourite with the bookies – suffering one of the biggest shock defeats in boxing history….although not as eyebrow-raising as his defeat to Buster Douglas, admittedly.

This rematch between Iron Mike and Holyfield at the MGM Grand in Las Vegas also made headlines….for all the wrong reasons. Tyson was disqualified after biting a chunk out of Holyfield’s ear in what has become one of boxing’s most infamous moments.

Bizarrely, when their fighting days were over, Tyson and Holyfield became good friends!

It’s always frustrating for fight fans when a much hoped-for dream bout takes place years after one or both of the pugilists are past their prime.

In 2007, Floyd Mayweather was arguably at the peak of his powers – a 30-year-old with a perfect 37-0 record to his name. Oscar de la Hoya, sadly, had already lost four times by this point and had recently been knocked out by the concussive power of Bernard Hopkins.

Even so, the 34-year-old dug deep to produce a performance akin to that of his pomp, and he and Mayweather put on a classic that ‘Money’ clinched by virtue of a split decision.

De la Hoya would only fight twice more, a decision perhaps based upon the fact he trousered around £50 million for his battle with Mayweather.

All of the top three bouts on this list feature Floyd Mayweather, who is Money by name and money by nature in his ability to bank huge sums from the fight game.

Ranking in second was his crossover scrap with UFC brawler Conor McGregor, who himself is no stranger to talking a good fight and putting bums on seats.

The pair were battling it out for a custom-made belt featuring more than 3,000 diamonds and 24-carat gold studs, but more importantly than that they were able to bank huge sums into the bargain – Mayweather, it’s believed, took home a staggering £150 million.

Having turned 40 by this point, Money was no spring chicken. But he danced his way to victory against a game but limited McGregor, who lacked the skills to become the first to defeat Mayweather in his outstanding career.

A fight that arguably should have taken place five years earlier still brought home the bacon, with Mayweather vs Pacquaio the highest-grossing bout in boxing history.

The figures are astonishing. More than £300 million was made from PPV buys alone and a further £50 million came via ticket sales, and in the end Mayweather (£223 million) and Pacquiao (£122 million) enjoyed the kind of payday most can only dream of.

The action in the ring was almost doomed to be an anti-climax, and so it proved with both men treating the other with maximum respect. Mayweather would prevail by a wide points decision.

Previous Post: « Which Player Has Scored the Most Premier League Goals in a Single Season?
Next Post: Why Doesn’t the Premier League Have an All-Stars Game? »