Were they the worst of friends or the best of enemies?

Given that they shared a near two-decades long battle for supremacy, you would think that Roger Federer and Rafael Nadal might avoid each other off-the-court, as has been the case with some of the tennis’ other most contemptuous rivalries.

But no, it turns out that despite the fact they – along with Novak Djokovic and Andy Murray, principally – have prevented one another from becoming tennis’ truly outstanding men’s singles champion, Federer and Nadal actually get along famously.

It’s somewhat fitting then that the duo would be on the same team for Federer’s final competitive appearance prior to retirement, with the Swiss and the Spaniard taking to the court as a doubles pairing in a Laver Cup tie at the O2 Arena in London.

“It’s super special playing with Rafa. I’m happy to have him on my team and not playing against him,” Federer commented.

For all their camaraderie, there will have been plenty of times when the pair cursed one another during the course of their 40-match rivalry, which began – if you want to feel old – way back in 2004.

But who enjoyed the better head-to-head record – Federer or Nadal? 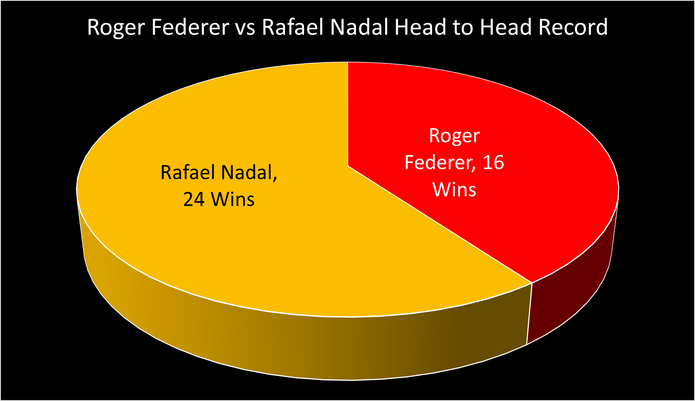 As mentioned, the duo met 40 times in competitive ranking events….with Nadal coming out on top in 24 of their meetings.

They first collided at the Miami Masters in 2004, with Nadal taking the win, and in a marker of their 18-year long battle that would follow, Federer won a five-set epic the next time they would clash….at the Miami Masters, coincidentally, a year later.

“We’ll see a lot of him in the future. For me it was a huge match, because I know what a great player Rafa will be one day,” Federer said afterwards.

Thanks to the world ranking system and the seedings set-up that feeds into that, Federer and Nadal for the most part only met in the latter stages of tournaments.

Tellingly, 24 of their 40 encounters came in ranking event finals, and again it’s Rafa that led the way with 14 wins to Roger’s ten. But those were largely decided by the surface that the game was being played on – Nadal winning eleven of their thirteen finals played on clay, and Federer prevailing in nine of eleven on grass or hard courts.

As for their head-to-head record in Grand Slam finals, here’s the tale of the tape:

As you can see, it’s Nadal that led the way with six wins in their nine Grand Slam final meetings.

Federer vs Nadal: Most Titles

Written in September 2022, there is – in theory – a chance that Nadal will add to his trophy collection, despite his status as a fairly injury-ravaged 36-year-old.

At the time of writing, Federer’s extra years – and perhaps better all-round, all-court game – swept him to 103 ATP Tour titles compared to Nadal’s current tally of 92.

There’s all sorts of trophies in Roger’s collection, with 20 of them coming in majors – eight Wimbledon wins (an open era record) met with six Australian Opens, five US Open victories in a row and a sole triumph at the French Open.

Federer has also claimed six year-end championships – latterly known as the APT Tour Finals, and has an Olympic silver medal to his name after losing out to Andy Murray at the London Games in 2012.

As for Rafa, he famously passed Roger’s 20 Grand Slam title haul at the Australian Open in 2022, and after adding the French a few months later he now stands clear as the winning-most singles champion in men’s major history on 22.

Nadal has never really enjoyed the year-end championships – he has lost in two finals, but typically skips the event, but he does have another bragging right over Federer: he has an Olympic gold medal in his collection, having prevailed in Beijing back in 2008.

The charismatic Swiss vs the pugnacious Spaniard. The sublime shot-maker against the baseline grinder. The classic right-hander against the idiosyncratic leftie.

The contrasts in the Federer vs Nadal rivalry only served to enhance the quality of their matches, and it’s fair to say in their 18 years of competition they served up some absolute humdingers.

It won’t be remembered by many, but their clash in the final of the Miami Masters back in 2005 was noteworthy – Nadal, then a dangerous teen, led two sets to nil and 4-1 in the third, before a barnstorming comeback from Federer saw him win it in five.

All told, five Federer vs Nadal contests went all the way to the fifth set, including two non-majors in Miami and at the 2006 Rome Masters, which also has to go down as a classic. They went toe-to-toe for more than five hours in the Italian capital, with Federer at one point holding match points before Nadal roared back to win 7-6 in the deciding set.

The pair served up five set epics at the Australian Open on two occasions, but for sheer entertainment factor alone surely the two Wimbledon finals of 2007 and ’08 take some topping.

The 2007 meeting saw Nadal twice battle back from the brink to level up the contest, before Federer eventually pulled away in the fifth set.

That served as a mere aperitif for the 2008 final at SW19, which many believe is the greatest game of tennis ever played. This was a contest of high emotion and rollercoaster swings, as Nadal went ahead 2-0 only to be pinned back by Federer in a pair of tiebreaks that delivered the most nerve-shredding tennis imaginable.

The fifth set saw more nip-and-tuck fare capped by some outstanding tennis, and as the game went into overtime it was Nadal who stood tall as the physically stronger to clinch a remarkable 9-7 victory.

Previous Post: « The Strangest Contract Clauses In Sport: From Space Travel to Sheep Testicles
Next Post: Which Premier League Club Has Sacked the Most Managers? »