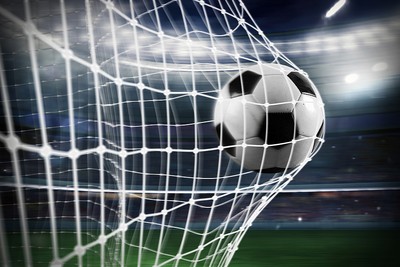 If goalscorers are worth their weight in gold, then some strikers could be considered priceless and others would barely scrape a mention on Cash In the Attic.

At £54 million, you get the feeling that Manchester City have scored an absolute coup in bringing Erling Haaland to the club. Aged just 22, the Norwegian has already blossomed into one of the most prolific frontmen on the planet, and his early form with the Cityzens suggests that all manner of records could be broken this term.

He bagged a brace in his side’s comfortable 4-0 rout of Sevilla in the first round of Champions League action, and that was a continuation of his goal-den exploits in his first few weeks as a Premier League star.

Haaland has blasted ten goals in his opening six games in the English top-flight, and if he can stay fit and continue scoring at a similar rate he would finish the 38-game campaign with a barely-comprehensible 63 goals to his name!

As unlikely as that seems, it is still almost a given that Haaland will finish as the Premier League’s Golden Boot winner this term, but will he break the all-time record for most goals in a top-flight term?

To do that, he’ll have to top these stellar seasons.

Who Has Scored the Most Goals In a Premier League Season?

There’s a bit of a disclaimer alert incoming, because there are technically two answers to this question.

Once upon a time there were 22 teams in the Premier League, and so each side would play 42 games a term – four more than the current format of the 20 team, 38 game season. 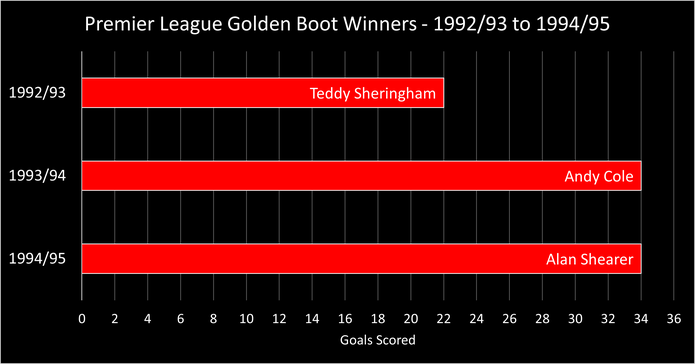 So, in days of yore, the Premier League Golden Boot has been won by a 34-goal tally – those exploits were achieved by Newcastle United’s Andy Cole in the 1993/94 season, and then by Blackburn’s Alan Shearer a year later.

In the modern era of 38 games per team, however, the most goals scored in a single Premier League season is the 32 blasted by Mo Salah back in 2017/18.

The record for most goals scored in a single 38-game season.

The Egyptian broke another record during that same campaign, having scored in 24 of Liverpool’s 38 games – nobody has scored in more games since the Premier League reverted to the 20-team format in 1995.

Three players have scored 31 goals in a 38-game Premier League season – Luis Suarez, Alan Shearer and Cristiano Ronaldo – but it’s the Uruguayan that takes top billing due to his excellent goal-to-game ratio.

The exploits of Suarez were not enough to guide Liverpool to the Premier League title – the famous Steven Gerrard slip saw to that, while Shearer’s own 31-goal haul was only enough to haul Blackburn Rovers to seventh place….he notched more than 50% of their total goal return.

But there was better news for the third player in the 31-goal club, with Ronaldo’s prolific campaign enough to guide Manchester United to the 2007/08 title. Only Fernando Torres, Emmanuel Adebayor and Roque Santa Cruz got within 50% of CR7’s impressive goal tally that term.

Who Has Scored the Most Goals In an English Top-Flight Season?

We can open up the question to cover every single top-flight season dating back more than a century, when the Premier League was given the more humble moniker of First Division.

There are some extraordinary feats of goalscoring when we take a step back through time, and a special shoutout must go to Everton legend Dixie Dean.

The striker boasted a record of better than a goal-per-game in an English shirt, but it was his exploits for the Toffees during the 1927/28 season that have earned him a place in the record books.

Dean blasted an extraordinary 60 goals, and those came in just 42 games in an Everton side that would, unsurprisingly, go on to be crowned champions. Not bad for a 21-year-old who was in a motorcycle crash so bad it left him with a fractured skull.

Who knows, maybe Haaland will go on to emulate Dean’s ridiculous achievements in 2022/23….

Previous Post: « The Earliest Premier League Sackings: Which Managers Lasted the Least Time Into the New Season?
Next Post: Ranking the Biggest Purses In Boxing History After £75 Million Fury vs Joshua Confirmed »